Zoning In On Deer?
Votes

Zoning In On Deer?

Archery hunters to use bow and arrows 50 yards from homes?

“On Nov. 5, 2007, I was returning home from a busy day,” Leventhal said to Montgomery County’s Delegates and Senators. “I was driving on the Beltway when a deer smashed through my window, striking me in my face.”

“All of the bones on the left side of my face were shattered, my cheek, my nose and my jaw. I’ve had four facial reconstruction surgeries. People tell me I’m lucky.”

“I know what they mean,” Leventhal said, but added that he would not wish his luck on anyone.

“The experience certainly helped me to understand the randomness and uncertainty of life as well as the great hazards posed to our citizens from the proliferation of deer.”

Bill MC 5-14 is just one of the hundreds of Bills that Maryland’s Delegates and Senators will debate when the 434th session of Maryland’s General Assembly convenes at noon on Jan. 8, 2014 in Annapolis. Montgomery County’s delegation listened to testimony about local bills, including this one, Dec. 2, 2013 in Rockville.

THE ARCHERY HUNTING Safety Zone bill would reduce the safety zone for archery hunting of deer from within 150 yards to 50 yards “of a dwelling house, residence, church, or other building or camp occupied by human beings ... while it is within this area, without the specific advance permission of the owner or occupant.”

“These numbers do not include collisions where the police are not notified,” according to the DNR.

“This legislation may be most particularly helpful around the C&O National Historical Park because the National Park System does not have a deer hunting plan,” said Leventhal.

MANAGED HUNTS are being conducted throughout Montgomery County parks, with plans to include Cabin John Park in Potomac later this month.

“These efforts are not doing enough to stem the problem,” said Leventhal.

But with the current 150-yard safety zone, Luedtke testified, “you always have one landowner who opposes it.”

Del. Benjamin F. Kramer (D-19) spoke in support of concerns of citizens surrounding the implementation of such a bill.

“Could it be a neighbor is concerned for the safety or his family, his children and family pets?” he said.

DNR hasn’t reported a single injury to a non-hunter in the past 50 years, said Leventhal and Luedtke.

Kramer asked: “Is it possible that the reason we haven’t had those accidents is we’ve had a safety zone like Montgomery County’s of 150 yards?”

“What I have looked for in the legislation and have not been able to find is any requisite that the hunting be done by someone who is skilled and experienced,” said Kramer.

“Would you want Ben Kramer cut loose with a bow and arrow 50 yards from your home? Because under this bill that’s what could happen,” Kramer said.

“There’s no disagreement that we have a deer problem. I think everyone is in agreement with that,” said Kramer. “The question is how do we best address it.”

POTOMAC RESIDENT Peggy Dennis said her cul de sac, adjacent to national parkland, agreed to permit a bow hunter onto their property last year. He came with a timed corn dispenser every day early in the morning and killed 11 deer in 10 days, she said.

“He was silent, he was lethal, he was extremely efficient. No one in the neighborhood even knew he was there,” said Dennis. “When done right, it’s extremely humane, it’s fast, lethal and relatively painless.”

But Maria Fusco testified that she was convinced to let bow hunters onto her property last year.

Fusco said it was impossible not to notice the “handy work” of bow hunters on her property, who left entrails on her land.

Bow hunting wasn’t as seamless as those who testified in support of the legislation suggested, she said.

Would she permit bow hunters to come back to her property this year?

Not a chance, she testified.

Montgomery Parks will expand sharpshooting of deer to include Cabin John Regional Park in Potomac, beginning Jan. 10, to address damage caused by an increasing deer population.

Recent estimates indicate deer population in the park is nearly four times the recommended density for an area that size.

“The decision to add this park to the deer management operations was made after review of citizen complaints and input, and with strong support from the community,” according to the announcement.

“Certified Park Police Sharpshooters will lethally remove deer from the park, under very stringent guidelines and in the most humane way possible.”

Information about the hunts will be posted on signs throughout the park, on the Montgomery Parks’ website homepage and communicated via Park Police patrols.

All deer harvested through the effort will be donated for consumption at local soup kitchens.

Cabin John Regional Park is among 29 parks in the Montgomery Parks’ system selected for managed hunts during the fall 2013, winter 2014 season.

Currently, under Maryland law, “a person, other than the owner or occupant, while hunting for any wild bird or mammal may not shoot or discharge any firearm or other deadly weapon within 150 yards, known as the ‘safety zone,’ of a dwelling house, residence, church, or other building or camp occupied by human beings, or shoot at any wild bird or mammal while it is within this area, without the specific advance permission of the owner or occupant.”

“Be it enacted by the General Assembly of Maryland that the laws of Maryland read as follows:

“For archery hunters in Carroll County [or], Frederick County, OR MONTGOMERY COUNTY, the safety zone … extends for 50 yards from a dwelling house, residence, church, or any other building or camp occupied by human beings. ...

In 2012 in Montgomery County, there were 2,019 deer-vehicle collisions serious enough to report to police. One proposal to reduce the deer population is to expand the area open to bow hunters. 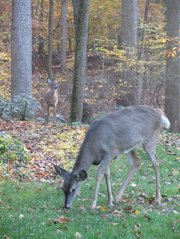 Proponents of increased hunting of deer say it is needed in part to counter the fact that the National Park Service has no program to reduce or control the deer population in the C&O National Historical Park. 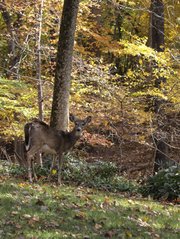