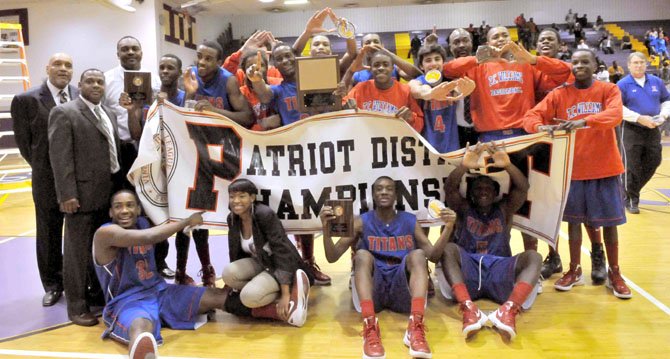 Burke — T.C. Williams point guard Daquan Kerman climbed a ladder and started to take part in the celebratory ritual of post-championship net cutting after the Patriot District boys’ basketball final on Feb. 17. While the senior prepared to remove a piece of commemorative twine from a basket at Lake Braddock Secondary School, his Titan teammates gave the floor general a hard time about his past struggles with scissors.

"When we won the district championship when I was in ninth grade, I didn’t know how to use the scissors on the net," Kerman said. "So they always tease me."

While Kerman might struggle with the celebration part, the four-year varsity veteran showed he can handle leading a team to victory on a championship stage.

T.C. Williams, winners of four of the last five Northern Region titles and the 2008 state championship, experienced a sub-par regular season by its standards, entering the postseason as the No. 4 seed in the Patriot District with a 14-9 record. The Titans lost two home games to Northern Region opponents and suffered a four-game losing streak in January. Regardless, TC regrouped in time for the district tournament, knocking off West Potomac in the first round and edging top-seed Woodson in the semifinals. Against South County in the championship game, the Titans held the Stallions to their lowest offensive output of the season.

"It means a lot because everybody doubted us. You see everybody here now, but they weren’t here when we were losing. We came together as a team. We were all we had."

"It means a lot because everybody doubted us," Kerman said. "You see everybody here now, but they weren’t here when we were losing. We came together as a team. We were all we had. We just bonded. We had our mind set on the district championship."

Kerman is the Titans’ primary ball-handler, but rarely does No. 1 look to score. On this night, Kerman picked his spots to be aggressive and finished with a team-high 13 points. He scored on a drive to the basket late in the second quarter to give TC a 26-17 halftime lead,

part of an 11-3 run to close the half. In the third quarter, Kerman came up with a steal and drove coast-to-coast for a layup.

"[Robertson is] a sparkplug off the bench for us," King said. "Some nights he doesn’t score, but his energy level is off the charts."

"TC, they’re a heck of a team. They did things differently than they did the first few times we played them," said South County head coach Wendell Johnson, whose Stallions split their two regular-season meetings with TC. "They controlled the pace of the game and we really couldn’t get it back."

TC defeated Thomas Jefferson 56-40 on Feb. 20 in the opening round of the Northern Region tournament, giving the Titans 10 wins in their last 11 games. TC ended its season with a loss to Westfield in the quarterfinals on Feb. 22.