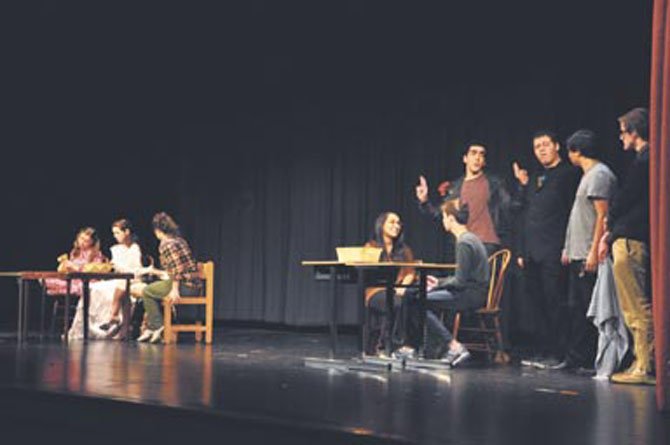 Langley students play the various parts of a man and woman’s subconscious in the one-act play "Reservations." Langley presented 10 different one act plays last weekend, which were all student-directed. Photo by Alex McVeigh.

Students at Langley High School presented their annual One Act Plays Friday and Saturday, giving the students a chance to not only act, but write and direct the performances as well. 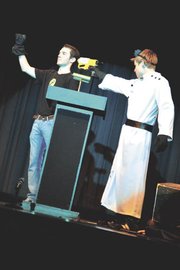 More than 50 students participated in the 10 plays, five of which were written by students. The plays differed widely in subject matter. "Linda Her," directed by senior Brian Patterson explores a woman’s growing disenchantment with her domestic life during a sleepless night, while "Dr. Horrible’s Sing Along Blog," directed by seniors Justin Cecil and Alex Lichtenstein features a tongue-in-cheek musical look at the superhero genre.

Cecil, who adapted the play from an internet miniseries, is directing his fourth performance at Langley, but this is his first musical.

"This was probably the most fun I’ve ever had, even though I found it’s harder to direct a comedy," he said. "Me and Alex had a great time adapting the miniseries into a one-act play."

Cecil started acting in the theater, and eventually expanded his horizons to writing and directing. He says he’s learned more with each performance he’s directed.

"I used to be more strict with my actors, but I’ve learned to give them more leeway," he said. "I found a more relaxed feel helps, and when it’s more fun, people feel worse about forgetting their lines."

Sophomore Hayley Wenk made her directorial and writing debut with her play "Creation."

"I’ve written some things, but this is the first one that’s made it outside of my computer," she said. "It was really cool to see everything come to life on the stage. I think the cast took it in a lot of cool directions."

From left, Kaity Hinojosa, Neil Patil and Natalie Harris perform in "Linda Her," one of the one act plays presented last weekend by the Langley High School theatre arts department.

Junior Alex Swann served as the tech director for the plays, and said the variety of shows presented in a short amount of time presented a unique challenge.

"I think ‘crazy’ is an accurate description of the schedule. We usually work on one show at a time over three or four weeks, now we’re doing 10 shows in about two weeks," he said. "The hardest part is the props, our prop closet has mostly furniture, so we have to do a lot of searching."

Langley Theatre Arts Director Phyliss Jaffe said the one acts are a good chance for the school to take advantage of the depth of talent available.

"Since it features about 50 students, the one acts are a great chance to give everyone some experience," she said.