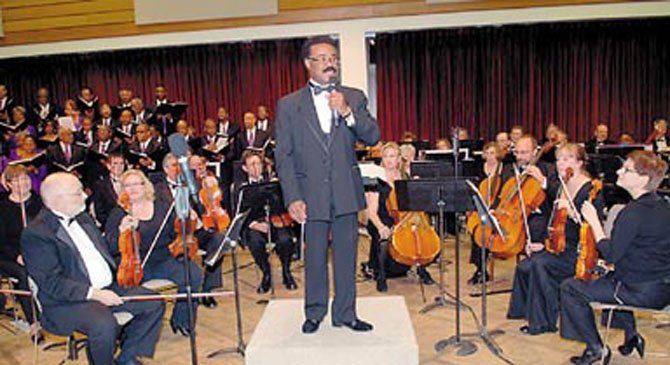 Maetro Dingwall Fleary addresses the audience prior to the MLK Concert. Photo by Michael McKee/The Connection

By By Michael McKee

Reston — Saturday, Jan. 14 the Reston Community Orchestra, known for its interpretation of Baroque, Classical and Romantic music, had the audience jumping with its presentation of Spirituals and crowd pleasing Duke Ellington numbers. The Reston Community Center was filled to capacity and Maestro Fleary and the RCO were in top form, proving they are also adept at contemporary music.

The program began with the audience participating in singing the oft-called African-American Anthem entitled "Lift Ev'ry Voice & Sing" and then moved on into works by Samuel Coleridge Taylor, an African-English composer, and Antonin Dvorak, a Czech. The former featured section leader Stephanie Fouse on the flute and the latter was introduced by the Heritage Signature Chorale, directed by Stanley Thurston. Next was the premiere of a piece by the contemporary composer Eric Lacy, who was in the audience.

Beverly Cosham, President of the RCO, welcomed elected officials and all the audience.

But then came the excitement. Fleary led the RCO into a number of selections from Gershwin's "Porgy & Bess" with fine trombone playing and then a show-stopping medley of Duke Ellington pieces, featuring some great trumpet work. By the end of the "Duke's" medley, the audience was stomping, cheering and a chorus of "whoos" was shouted.

Following intermission, Beverly Cosham, the RCO President, acknowledged the presence of elected officials and then performed two numbers. Following that, the Heritage Signature Chorale took center stage. Directed by Thurston, the group sang by memory, a capella (without accompaniment), stayed perfectly on pitch and featured some excitingly strong and high-ranging sopranos.