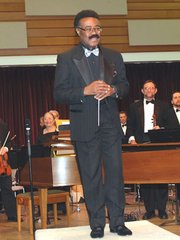 Late Sunday, the Reston Community Orchestra pulled in a large and enthusiastic audience to the Reston Community Center. Maestro Dingwall Fleary presented a program that he called "Mostly Baroque," with Handel, Vivaldi and Bach featured. Then, as though to remind us of his term "Mostly," he concluded with a sociologically marginal, very modern composer, Edward Elgar. Here was a true "odd man out." A self taught man surrounded by academics, a Catholic in Anglican England and a person of quite humble origins in an elitist society, he lived until 1934. Elgar nevertheless made himself become successful (we know him for his Pomp and Circumstance) and perhaps that is why Maestro Fleary chose to conclude with this Modernist.

RCO President Beverly Cosham introduced the program, and following intermission, the Bach "Brandenburg Concerto" featured three soloists from the orchestra. Concertmaster Fred Rupert was on violin, Stephanie Fouse on flute, Maestro Fleary switched over to harpsichord and percussionist David Tiller handled the conducting. But it was Fouse that captivated the audience.