A Tribute to Bob Simon
Votes

A Tribute to Bob Simon 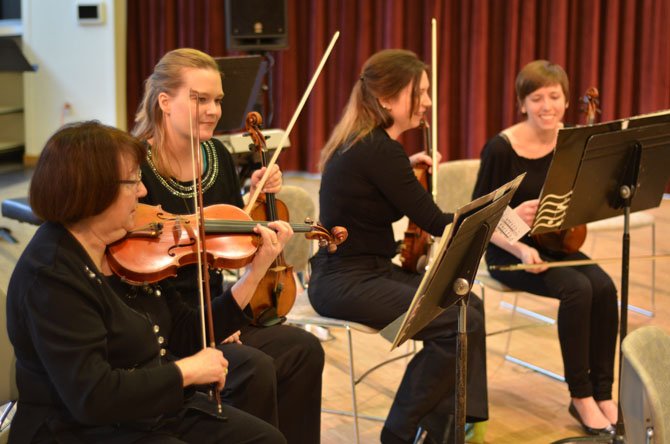 The Reston Community Orchestra is composed of musicians from throughout the northern Virginia area. From left, Bonnie Hudson, Sarah Connelly, Emily Hufnagle, and Erin Lindgren prepare their violins for a concert at Reston Community Center. Photo by Ryan Dunn

Conducting the orchestra was Dingwall Fleary, a maestro who has directed Reston Symphony Orchestra for 16 years. "In planning the concert it was with the idea of recreate the ideas of Bob Simon’s innovations… it was a personal treat to be able to plan the program. I think he [Simon] is a treasure to the community and I am pleased with how the orchestra has grown and become a treasure to the community as well."

Fleary has also conducted the McLean Symphony orchestra for 42 years and been director of music at Emmanuel Lutheran Church, in Bethesda, Md., since 1988.

Founded in 1988 as Reston Chamber Orchestra, Reston Community Orchestra (RCO) is an all-volunteer ensemble devoted to music and the community. The performance repertoire covers the entire spectrum of orchestral music including baroque, classical, romantic, and contemporary compositions. The music selection on Sunday’s concert included work by Béla Bartók, Paul Creston, and Albéric Magnard. "This is the kind of music that really stretches your ears and intelligence," said Fleary.

"It has been very challenging and rewarding to play this particular selection of music," said Ann Summerson, RCO Assistant Concertmaster and resident of Reston. "This is a once in the life opportunity to hear this type of music," said Felicia Kessel Crawley, who played the keyboard. Before Fleary took the stage, Reston resident LaVerne M. Gill welcomed everyone to the event. "My husband and I had company from Mexico, and they certainly enjoy the music played on the marimba," said Gill.

"I think for the community it is a gift to be able enjoy nice music… and the closing song ‘Jerusalem’ was such a treat," said Gill. One of the highlights of the music performance was when members of the chorale ensemble sang "Jerusalem" by Hubert Parry. Bob Simon also went up to join in the performance. The song is one of Simon’s favorites, and he enjoyed singing it while in glee club.