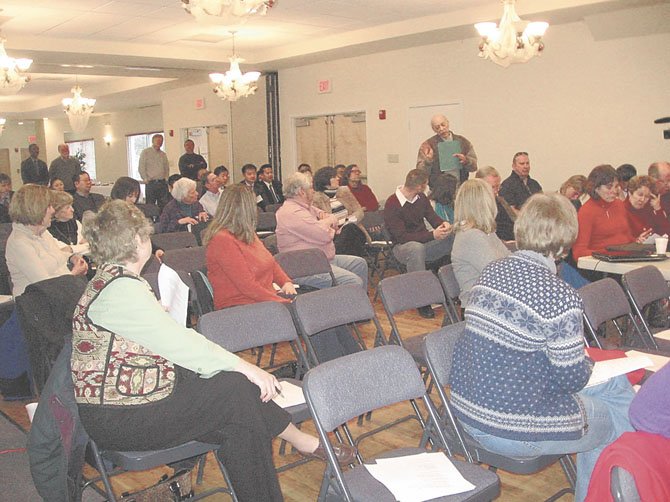 Despite icy road conditions early in the morning, approximately 50 citizens showed up at American Legion Post 180 hall to listen to their Commonwealth representatives speak and to ask questions of them. 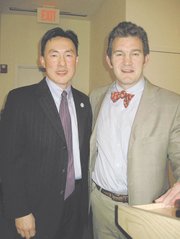 Del. Mark Keam and Sen. Chap Petersen represent the residents of the Vienna area in the Virginia General Assembly.

Keam noted that the governor’s proposals to fund transportation hinged on several "ifs," none of which guarantees new funding. There are no new revenue sources included in Governor McDonnell’s proposals, and Keam was quick to point out that new revenue need not translate into higher taxes. "We can take money being spent unwisely in other areas to be reallocated to the transportation fund," Keam said.

Petersen detailed the Commonwealth’s financial position, its challenges and the issues he is aggressively addressing. Cuts in federal spending, particularly in Northern Virginia, has adverse effects on defense-related jobs and on revenue. Adjusting to a new climate of reduced federal spending means creating new jobs to replace those lost and new means of revenue. Petersen sees three areas of job growth in Virginia: energy, biosciences and manufacturing. "We have to find a way to get manufacturing back to Virginia," Petersen said, adding that Virginia’s natural resources are frequently exported out of the country for production. Virginia wood, for example, is made into cabinetry in China.

VIENNA REALTOR George Creed raised the issue of eligibility for VDOT road maintenance. "A lot of roads in Northern Virginia do not qualify for maintenance," Creed said, describing the numbering of routes which determines maintenance funding qualification. Maintenance of existing road systems is the number one concern of transportation funding, Keam said. "There’s absolutely no new money in the Commonwealth for transportation," said Keam, admitting he was open to any ideas constituents have. Everything is on the table, he said. The Commonwealth’s position on devolution, in which the Commonwealth says to local jurisdictions, essentially, "these are your roads, your problems. Fix them," runs counter to the state’s position on local transportation taxes. Counties are not allowed to raise revenue for transportation, Keam explained, but are expected to take control of maintenance of roads under devolution.

Petersen said there are four sources of transportation trust funding, with the fuel tax and titling fees dominant. With people holding on to their vehicles longer and newer vehicles getting better gas mileage, those two sources of revenue are going down, he said.

Among the bills Petersen has sponsored, SB161 is particularly important to Fairfax County and its dense population: SB161 calls for reforming the Commonwealth Transportation Board, whose current composition is based on highway districts reflecting 1930s Congressional districts. SB161 would apportion representation by today’s population. "It’s completely out-of-whack of where the population is nowadays," said Petersen.

Keam co-sponsored bills to support returning U.S. veterans. He’s on the veterans and military caucus in the House, and has introduced a bill that would provide financial incentive for businesses to hire vets. "What can we do as a state to make their lives easier when they come back," Keam asked.