Vienna — Stepping into Deepa Patke’s Vienna kitchen is like walking into a parfumerie for foodies…Indian food foodies. The air is redolent of herbs and spices familiar to Indian cuisine and her production work area, Virginia Agriculture-certified, is set up there. What Patke does is blend and package her own inspired Indian herb blends and makes popular Indian-style cookies that she sells on her own storefront website, aromaticspiceblends.com, and at local markets.

A career immunologist, Patke gave up long hours of professional research work to turn a passion for Indian cooking into a stay-at-home career that gives Patke what she wants the most. Time with her young son. 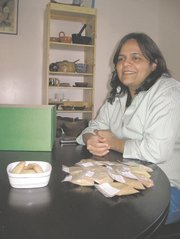 Scientist-turned-entrepreneur Deepa Patke of Vienna sells spices she has ground, blended and packaged herself online and at Vienna shops.

"Sometimes, I wonder why I don’t go back to what I did for many years," said Patke. "But, I am loving the creativity and the complete attention I can give my own product without being bossed around. I have the time to spend with my son right now. It’s a gift from the universe."

PATKE AND HER HUSBAND left Pune, India, in 1998 for Johns Hopkins, where Patke’s held her first post-doctoral fellowship in immunology. After completing her post-doc there, Patke returned to Pune to develop clinical trials supported by her Hopkins mentor. She left the Hopkins environment in 2001 and, in 2002, Patke took on a second post-doc, this time at the University of Maryland. Patke’s post-doc ended in 2004, shortly after she discovered the couple was expecting their "miracle" baby. Although she returned to research for a couple of years after her son was born, her heart was no longer tied to her job. She was working "really crazy" hours and not seeing her son as much as she wanted.

Patke credits her husband for his support and his own perseverance that inspires her. "He doesn’t back off from what he wants to do," said Patke. "I learned a lot from him."

Her husband planted the seed of producing Indian spice mixes from their home in Vienna.

"I was always experimenting with spices," said Patke. "My husband said, ‘you do so much with food, why don’t you do something about it if your heart’s in it?’"

Patke said she knew nothing about starting a business so she did what she knew best, research and learn. She took classes, in 2010, through the Community Business Partnership which guided her through the paperwork and licenses she needed to grow a small business. Her home kitchen was inspected and approved by an inspector from the Virginia Department of Agriculture and Consumer Services, who evaluated her home and work stations for more than five hours. Aromatic Spice Blends opened officially in December of 2010 and Patke has orders coming in regularly for her individually-packaged spice blends and her cookies. Her spice blends, packaged at 25 grams, are packed in decorative cloth bags.

Patke buys the whole spices and herbs from local retailers, then grinds and blends them using her own proprietary process. Her recipes have been passed down from her mother, aunts, and, even, an uncle and cousins.

She admits to "toning down" some of these recipes to adapt to the taste of her own family. Her husband is the official "in-house" tester and her niece, a culinary expert, brings in another perspective.

SPICES, said Patke, keep very well and have a long shelf-life. During the farmers’ market season, she makes the blends almost every other week. Otherwise, they are made-to-order based on the demand from her online store. At the Maple Avenue Market, Patke restocks the spices as demand dictates, but does change them out every three to four weeks to maintain freshness.

"Freshness, authenticity, consistency, accuracy and use of the best quality ingredients are key to my spice blends," said Patke.

The past summer, Patke opened a stand at the Great Falls Village farmers’ market where, she said, she got to meet a lot of people interested in food and cooking.

She was conducting the first of her fall demonstrations at Maple Avenue Market the day the earthquake struck Northern Virginia. Her six-year-old son was with her. It was "scary," but Patke carried on.

Her son and husband are big fans of her spices. "My son is a great proponent of my venture," said Patke. "He tells everyone how good his mom cooks."

"If you have the support of your family and you push through it all, the struggles, you will achieve your goals," Patke said.