Wilson Clutch for Wolverines in Win over Bruins
Votes

Wilson Clutch for Wolverines in Win over Bruins

West Potomac boys one game out of first in Patriot District.

Alexandria — West Potomac senior Tamaric Wilson made a name for himself intercepting passes as a defensive back for the school’s football team. On Jan. 17, it was basketball Wilson wrestled away from an opponent to lift the Wolverines to victory.

The 5-foot-9 Wilson snagged an offensive rebound and drew a foul with 14.4 seconds remaining in the fourth quarter and West Potomac leading Lake Braddock by the slimmest of margins. Wilson then knocked down a pair of clutch free throws and the Wolverines held on for a 55-50 win at West Potomac High School, pulling the Wolverines within a game of the Bruins at the top of the Patriot District standings. 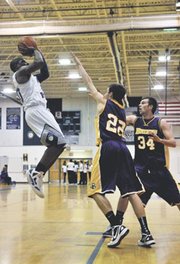 Wilson finished with 11 points and six rebounds, but none bigger than the offensive board that denied Lake Braddock a chance to take the lead in final seconds.

“He’s strong. He plays five inches taller than he is,” West Potomac head coach David Houston said about Wilson. “… It’s hustle. He’s 5 feet [9] and [Lake Braddock has] got two 6’4” guys in there and he gets the ball. That’s just who wanted the ball more. That’s it.”

West Potomac improved to 11-3 overall, 5-2 in the Patriot District. Lake Braddock and Woodson are tied atop the standings at 6-1.

“We needed to defend our home court,” Houston said. “In the district, that’s what it comes down to: you’re going to have to defend. We had aspirations of being [No.] 1 in the district at the end of the year and we knew we couldn’t go down three games to Lake Braddock, so this was an important win for us.”

Neither team led by more than six points throughout the contest. Lake Braddock senior Brendan McHale scored in transition to give the Bruins a 48-47 advantage with 3:03 remaining in the fourth quarter, but West Potomac scored eight of the game’s final 10 points to secure the win. Randal Brobbey’s transition bucket and Bryant Fultz’s tip-in gave the Wolverines a lead they would not relinquish in crunch time.

Beating Lake Braddock was important “just to prove to everybody that we play good basketball here and we’re a contender. We knew that, but now everybody else knows.”

“They were the first-place team, we were third-place team [and] it was a Patriot District game,” Houston said. “When we play Lake Braddock it always comes down to something like that. They don’t let you pull away. They’re good. They’re a good team. They have some solid shooters, solid players [and] they’re big inside. I’ve got a lot of respect for their squad, but we persevered. I’m really proud of my guys. They didn’t give up, they stuck to the plan and got through this game.”

Defense was a big part of the Wolverines’ success. West Potomac forced 31 turnovers, thanks in part to the anticipation and athleticism of sophomore DeMornay Pierson-El. The 5-foot-9 guard repeatedly came up with steals by jumping Lake Braddock passing lanes, some of which he turned into layups at the other end.

“I look for eye contact,” Pierson-El said. “Once [an opponent looks at] that player and he throws it, I break on it and the player can’t react to it.” 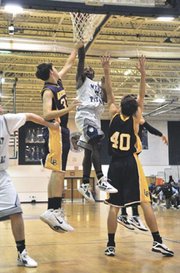 West Potomac sophomore DeMornay Pierson-El was a factor at both ends of the floor against Lake Braddock on Jan. 17.

Offensively, Pierson-El attacked the basket at will in the first half but struggled finishing near the rim. Houston spoke with Pierson-El at halftime and told him to relax. The sophomore responded by scoring eight of his 12 points in the second half.

“We just kept encouraging him,” Houston said. “He was getting the shots that we wanted to get and he normally makes those. Our plan was to penetrate and get by them and I thought he was doing a great job, he was just missing some shots. But he made up for it in the second half [with] a lot of big plays.

“Everybody knows he’s a tremendous athlete. He was anticipating very well in the passing lane. He followed the game plan, which for a young guy is tough to do. [For] a sophomore it’s tough to try to remember the plan the whole game and I thought he did a great job of it.”

“We had 31 turnovers. We shouldn’t win the game [playing] that way,” O’Connor said. “It was the worst game possible that we could have played. We didn’t pass the ball well, we didn’t make good decisions, but we’ll get them next time. …

“That was the worst game possible, so if we only lost by a basket or two, we’re still pretty happy. We’re just trying to work forward and correct our mistakes and hopefully go undefeated the rest of the season.”

West Potomac will host T.C. Williams at 7:30 p.m. on Friday, Jan. 20. The Wolverines will host Woodson on Jan. 30 and travel to face Lake Braddock in the regular season finale on Feb. 10.

Beating Lake Braddock was important “just to prove to everybody that we play good basketball here and we’re a contender,” Wilson said. “We knew that, but now everybody else knows.”