Hendersons Are Winners in Return to West Potomac
Votes 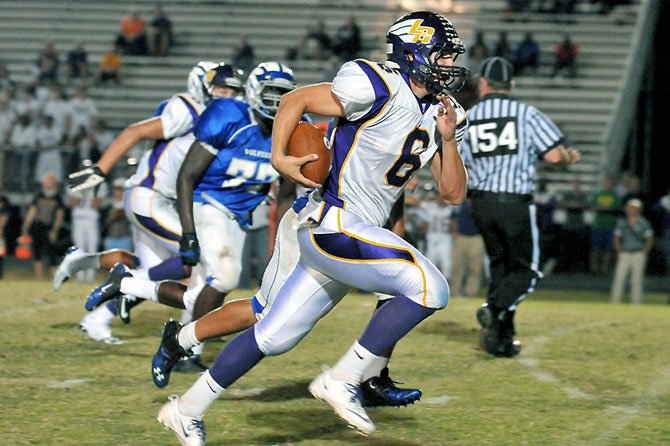 Lake Braddock quarterback Caleb Henderson on Sept. 21 led the Bruins to a win during his first game back at West Potomac High School, where he played varsity football as a sophomore. Photo by Louise Krafft.

The night before the West Potomac Wolverines and Lake Braddock Bruins met in a passionate Patriot District football contest on Sept. 21, former teammates Caleb Henderson and Demornay Pierson-El took part in some friendly banter over the phone.

In 2011, Henderson and Pierson-El were sophomore standouts for a high-powered West Potomac offense. Henderson was the quarterback and Pierson-El a receiver for a Wolverines team that won a share of the district title and reached the Division 6 Northern Region semifinals. 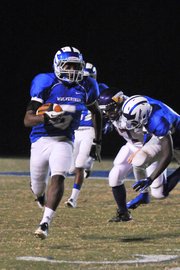 One year later, Henderson is the trigger man for the Lake Braddock offense and Pierson-El has moved to running back for West Potomac. He’s also a safety on the Wolverines defense. While the two remain friends, on Friday they were foes battling to stay atop the district standings.

“He called me for about an hour last night, telling me about how he was going to [intercept] me,” Henderson said after Friday’s game.

Pierson-El made good on his prediction. In fact, he picked off Henderson twice. But when the game was over, it was the first-year Bruin signal caller who had the last laugh.

Lake Braddock defeated West Potomac, 37-23, on Friday night. It was the first time Henderson and his brother, Jon, a senior linebacker, returned for a game at West Potomac High School since they transferred from the Alexandria school to Lake Braddock during the 2011-12 school year. Their father, Eric Henderson, was the head football coach at West Potomac from 2004 through the 2011 season before being informed he would not return. The Henderson family moved to Burke and Eric became the Lake Braddock defensive coordinator. Former Wolverine assistants Sean Brooks and Dave Murray also joined the Bruins staff.

West Potomac, led by first-year head coach Jeremiah Davis, scored a touchdown on the game’s opening drive and led, 16-7, at halftime. But Lake Braddock responded in the second half and pulled out the victory, improving its record to 2-2, including 2-0 in the district. West Potomac fell to 3-1, including 1-1 in the district.

Caleb Henderson accounted for 388 yards of offense and four touchdowns. He completed 25 of 40 passes for 246 yards, two touchdowns and three interceptions. He also carried 20 times for 142 yards and two scores. His 1-yard touchdown run in the third quarter gave Lake Braddock a 21-16 lead it would not relinquish.

“There’s so much spotlight on Caleb and pressure, I said just play within the scheme, take the plays when they come to you and once he did that and settled down, he did a heck of a job,” Lake Braddock head coach Jim Poythress said. “With Demornay and Caleb, you might be seeing the two best individual players in the region on the field at one time.”

Caleb Henderson said the experience of playing at his former school was emotional during and after the game.

“The emotion was definitely high because these guys are my brothers,” Caleb said about his former Wolverine teammates. “I’ve known them since I was 4. I just miss them a lot. It sucked to have to hold some of them and watch them cry.”

Jon Henderson was part of a Lake Braddock defense that limited West Potomac to seven points in the second half.

“I played with [West Potomac] for three years. They’re like brothers to me,” he said. “When I came to Lake Braddock, they accepted me as a family and as a team member. I didn’t want to let … my team down by coming back to this place and losing.”

Davis said the Wolverines didn’t focus on the return of Caleb, Jon and Eric Henderson during practice last week.

“To be very honest with you, everything that went into this [week] is the same thing that went in last week,” Davis said. “We were facing a district opponent and … there was nothing about anything that happened in the past; we didn’t even talk about it this week. The emotion came from Braddock [beating] them last year in the district, [wanting to] beat Braddock [and] keep us on a role. We’re undefeated, don’t let it stop.”

Pierson-El finished with 109 yards of offense and three touchdowns, but only 21 yards and one score came in the second half.

“For the past week, we’ve been looking at ways just to stop Demornay, whether it was just double-teaming him or putting an extra man out on the outside for the sweep,” Jon Henderson said. “Demornay’s a good player and I’ve played with him for two years, but when we have a better defense, one man isn’t going to stop the whole defense.”

West Potomac opened the game with a five-play, 65-yard drive, capped by a 35-yard touchdown run by Pierson-El. On Lake Braddock’s first possession, the West Potomac defense stuffed Caleb Henderson for no gain on a fourth-and-one play from the Lake Braddock 29. Despite taking over with great field position, West Potomac couldn’t capitalize, but the Wolverines later extended their first-quarter lead to 10-0 on a 28-yard field goal by kicker Chris Blewitt. 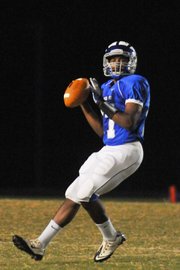 West Potomac led 16-7 when Pierson-El carried for a 1-yard touchdown with 6:32 remaining in the first half.

“To say I wasn’t a little nervous at halftime,” Poythress said, “would be an outright lie.”

Lake Braddock scored on the opening possession of the second half,vmatching 80 yards in eight plays. While the Bruins often moved thevball with short-to-intermediate passes, Henderson ended this drive with a 48-yard scoring strike to Jong Yoo, who finished the game with seven catches for 110 yards.

After Lake Braddock added a touchdown and a safety, the Bruins extended their lead to 30-16 when Alexander caught a pass from Henderson and broke loose for a 24-yard touchdown with 6:16 remaining in the fourth. Moments later, Lake Braddock fans chanted “Thanks for the quarterback.”

West Potomac pulled to within seven when quarterback Caleb Williams hit Pierson-El with a 12-yard touchdown pass with less than four minutes remaining, but Lake Braddock drained most of the clock on its final possession, capped by a 10-yard touchdown run from Trevor O’Brien.

“If we lost this game, I wouldn’t have gone out for the rest of the season,” Caleb Henderson said. “I would have stayed at home, watched film [and] I would have made sure we won every other game. Now that we won this game, we can exhale a bit. They were definitely one of the top teams in our district. We just had too many players, I guess.”

During a postgame interview, Caleb Henderson displayed playful frustration when informed Pierson-El had intercepted him twice. Later, outside the West Potomac locker room, Pierson-El talked about his pickoff prediction.

While Pierson-El won the friendly game inside the game, it was Henderson’s Bruins who came out on top in the big picture.