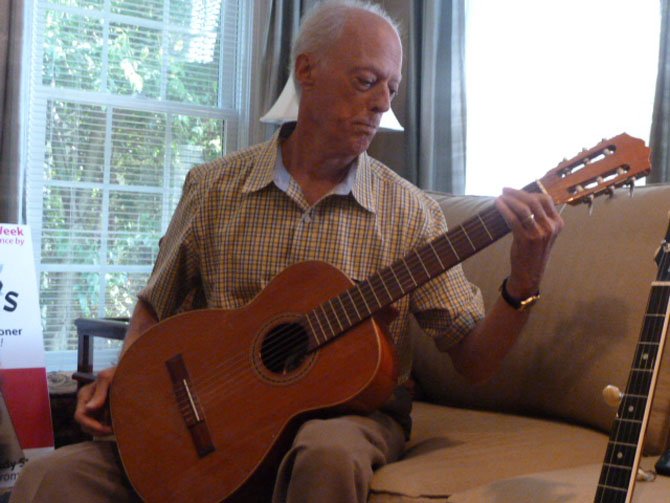 Potomac — “If my banjo and guitar music can bring well-being to others, then the journey has been worthwhile.”

Potomac’s Charles (Chuck) Croner has been making the world a bit brighter for wounded warriors, their families and the staff at Walter Reed National Military Medical Center by playing and singing a variety of gospel, bluegrass, country and patriotic songs. Croner, a Potomac resident for more than 20 years, finds that sharing his music has a special meaning for him.

Croner, a former Marine, served at the fence line in Guantanamo Bay, Cuba, as a forward air observer for helicopters and fixed wing aircraft, and as the Marine officer (Captain) in charge of flag presentation services at burial ceremonies, Arlington National Cemetery. He has a connection with the injured servicemen and women — and an understanding of what they have faced on the battlefield. He also believes that music is a source of joy and can help to heal the spirit.

After retirement, Croner, a self-taught flamenco guitarist and 5-string banjoist, decided to reinvent himself. His love for music inspired him to consider how he could best utilize his talents. “I realized I might be able to share my sounds with others in settings where music might elevate mood and even contribute to overall healing and wellbeing. Before long, I was playing for patients at Shady Grove Hospital Rehabilitation Center,” he said.

“In 2010 and 2011, I was asked to play for wounded and recovering soldiers at the Mologne House at Walter Reed Army Medical Hospital. Because of my military background, I found it comfortable to connect with many wounded warriors,” Croner said.

In May, 2012, he gathered a group of fellow musicians, formed an ensemble called “Charley and Friends” and performed at “Staff Appreciation Day” at Walter Reed. “We were well-received,” he said. “The staff and patients were clapping and singing along with us. I could just feel the positive energy in the room. I feel blessed to be able to share my musical gift with these courageous men and women.”

When Croner first entered the cafeteria for his performance, he was disturbed at the number of patients with prosthesis. He had to take a few moments to get control of his emotions and regroup. “I knew I would see a lot of injuries. But after observing and talking with the injured men and women, I was impressed and moved by their spirits and positive outlooks on life. They are not looking back — but looking forward to their new lives. I am pleased that our music can bring joy to them.”

“Charley and Friends” consists of Dr. Gwen Stamper on the piano and ukulele, Andy Steele on the trombone and Kevin Brown, guitarist. “When I asked them to play with me, each was immediately on-board,” said Croner. “They are all such talented musicians. We only had one practice — but it just clicked. It’s the heart that brought it all together.” Croner’s raspy tones harmonizing with Stamper’s voice adds to the group’s harmony and makes the audience want to sing along.

In 2011, Croner was presented with the “Warrior Medic” Award for Excellence by the Northern Region Medical Command of Walter Reed Army Medical Hospital. His next goal is to perform bedside for those with traumatic injuries who are immobile. “I have to get through the red tape, but I want to perform gentle soothing music for those who cannot move. I believe it would bring some peace to the patient.”

He urges those with musical talent to contact the “Stages of Healing” program which promotes healing through the arts at Walter Reed National Military Medical Center: “The idea of giving back to the community is so important. There are always opportunities to get involved.”