Bill Murray looks back on 23 years with Vienna Police Department. 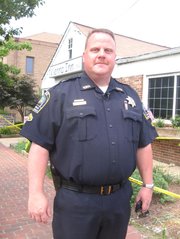 Out with the old, in with the new. Vienna Police Department Public Information Officer Bill Murray hands over the SUV and the police reports to fellow officer MPO Gary Lose on July 1. Murray retired from his position on June 30 and Lose takes over the position of VPD PIO.

Bill Murray refers to these as some of his "favorite summaries." Can you remember others?

*A citizen called to inquire as to why the Virginia DMV would mail her a set of "equals" signs for her license plates. A dispatcher informed her that if she turned the stickers 90 degrees they would probably be "11"s for 2011.

*Vienna Police were called regarding a civil dispute involving an all-you-can-eat steak promotion. The customer had been served a steak. He consumed it and wanted more. He was then told that it would take 30 minutes to cook. The customer felt this was a deceptive practice and simply a way to get him to eat off of the buffet instead of consuming more steak. The restaurant manager reduced the amount of the customer’s check and banned him from the property. The still-hungry customer left without incident.

*A dog was found wandering aimlessly. The dog was captured by an officer but refused to provide any information so it had to be transported to the animal shelter.

*A woman reported that she and her husband are getting divorced. On one occasion both passed in the hallway. He bumped into her with his belly and told her to move out of his way.

*A resident reported that a squirrel was refusing to get off of the top of his truck tire. MPO Sheeran was able to convince the squirrel to leave the area. He did so without incident.

*A citizen arrived home to find her house sealed off with police tape. She called the police after becoming concerned. Further investigation determined that her husband had thrown her a surprise party with a CSI theme.

After 23 years with the Vienna Police Department, five of which were spent as Public Information Officer for the department, MPO Bill Murray is retiring from the police force, effective June 30. His weekly police highlights, charged with wit and quirkiness, attracted fans from the community and local, metropolitan and national media.

"I’ve had a great career in law enforcement," said Murray. "Done everything I wanted to do … I have the opportunity to have a safety net for the rest of my life and to try different things now."

Murray is not retiring from the workforce. He joins the Northern Virginia Cigarette Tax Board [NVCTB] as an investigator, working with County, State and local jurisdictions.

"It’s been great working in the town I grew up in," said Murray. "Every day, I bump into someone I know.

MURRAY RECALLED THE EERINESS OF 9/11. "No airplanes in the sky. We were on higher security alert which was typical of all police departments throughout the country, but we also have buildings around here that other places don’t have."

One of Murray’s "most rewarding" assignments was that at the Fairfax County police academy, teaching recruits. "A lot of them still stay in touch," he said.

Riding with the motorcycle squad was fun. "I got paid to do what other people do for fun." Murray rode a police motorcycle from 1990 until 2001. "It was mostly fun, except in the winter, when I came down the hill and saw the thermometer at the bank. I prayed it would stay over 40 degrees."

He remembers the presidents who came to the Town of Vienna … Bush the elder and Bush the younger, Clinton and Reagan.

The lowest point in Murray’s career was when fellow motorcycle officer Lieutenant Ben Andrews was injured in a motorcyle crash, becoming paralyzed. It was in November of 2000 and then-39-year-old Andrews was chasing a violator. He crashed and became paralyzed from the waist down. "He was one of our own," said Murray.

VPD CHIEF ROBERT CARLISLE is among the many who say they will miss Murray, calling Murray a "great communicator," in print and speaking. "He’s such a high-quality person, so energetic, and for us, he just fit the role so well," Carlisle said. "Bill communicates well with the public and the media. With his experience in law enforcement for 20 plus years, he can communicate about police department activities at a depth we had never been able to do before he took the job."

Murray took it upon himself to collect updates on crimes and to report the updates in his weekly report to the public. The public, Carlisle said, has an interest in follow-up to cases. The human interest element, whether it’s dogs who do not identify themselves to a responding officer or families who fight over yogurt in the refridgerator, has engaged the community in readership and re-posting on Facebook. Late-night talk show hosts, as well as Washington, D.C. media, have picked up Murray’s summaries for broadcasts.

Carlisle characterized the role of VPD PIO as "critical" to the police department’s mission. "Our citizens really want to stay informed," said Carlisle. "And the more-informed the community is, the safer they are because it’s more effective to prevent crime than to solve it after it happens."

MPO GARY LOSE TAKES OVER as the Vienna police department’s Public Information Officer on July 1. He and Murray partner well, supporting one another and even ribbing one another. Lose, a 15-year Vienna officer, applied for the newly-vacated PIO position when Murray announced his retirement.

"He [Lose] said that nobody else wanted to work with me for a month training," said Murray.

Asked if he planned on any immediate changes to the office, Lose said, laughing, "I’m not allowed to do things differently from Bill.

"I haven’t had a chance to really thinking about changes because he’s involved in so many things," Lose said. "He’s still trying to bring me up to speed.

"Once I figure out how to manage all these existing things, then I’ll think of newer things or ways that Bill would want me to do."

Actually, Lose has been backing up Murray as PIO for a while. While Lose is discovering his own print voice, it’s clear that he echoes Murray’s wit in many ways. Lose’s tomato assault summary in a June weekly highlights report made it to residents’ Facebook pages.

Like Murray, Lose wants residents to feel they can call on him whenever they want to and ask him whatever they want. "I may not have the answer immediately at-hand, but, I’ll do whatever I can to find out and get back to you."

Lose repeats the VPD mantra. "If it’s any incident, no matter how foolish it appears, call us. That’s why we’re here."

"WE HAVE A UNIQUE POLICE DEPARTMENT in that the people in Vienna love us," said Murray. "The relationship residents have with its local police department is unique in the nation.

"They’re always bringing us cakes, goodies. They stop to talk to us.

"It’s fun to police when you have that relationship with the community."