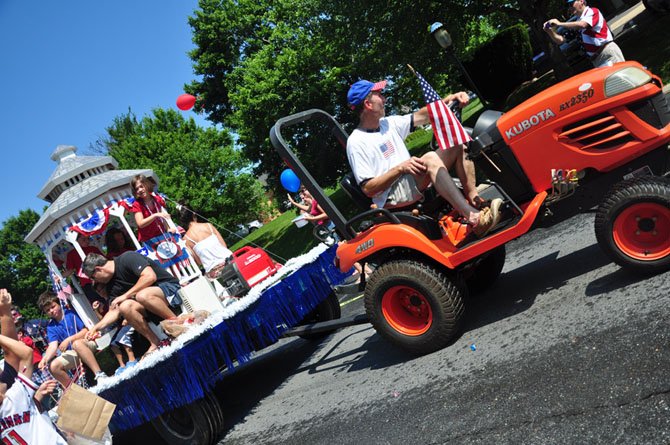 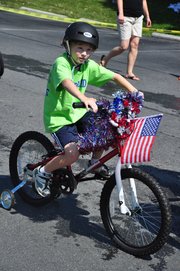 Declan Pitsinger, 7, rides his bike as part of the Great Falls Bike Brigade during the annual Fourth of July parade.

"I grew up in Ridgefield, N.J. and we had a baby parade every year. I moved to Great Falls and joined the Great Falls Friends, and when we started the Hometown Celebration back up, I thought we might try it here," Johnson said. "The first year it was over in five minutes, so we did a few laps. Now we’re in the 17th year of the children’s parade. We’ve made some changes, it used to be children under two, now it’s children under five. The volunteers have really done a lot of work to enhance it."

This year’s Little Patriot Parade featured dozens of the youngest Great Falls residents marching around the Village Centre in their most patriotic gear. This year’s activities kicked off with the annual 5K run that started at the Great Falls Freedom Memorial, but this year featured a new route.

"This year we did the 5K all along the trails, which has long been a dream of people like [Old Brogue owner] Mike Kearney," said Julie Casso, a member of Celebrate Great Falls, which hosted the day’s events. "The Great Falls Trailblazers did a great job clearing the trails in the weeks leading up to the run, and after all the trees were knocked down last week, members were right back out there this week with chainsaws clearing the trails."

Members of the crowd at the Fourth of July parade in Great Falls try to cool off near the H20 Pools float.

The Hash House Harriers, a local running club, helped mark the trail with flour, and after the markings were washed away during the storms, they returned to mark the trail a second time.

After the run and the Little Patriot Parade, the Village Centre hosted the annual Fourth of July parade, welcoming many local residents who had spent the week without power, but wouldn’t be deferred from celebrating the country’s birthday.

"This morning I thought there was no way we’d come out, after all, who wants to leave a hot house to stand out in the hot sun?" said Janice Manning of Great Falls. "But then we thought, it’s going to be the same temperature in both places, and we’ve spent the last four days sitting in a powerless house, so we wanted to have some fun."

Manning and her family got to the Village Centre just in time for the parade, where local organizations, businesses and individuals rode horses, bicycles, cars and various types of floats in front of a waving crowd.

"My favorite float was the H20 pools one, because I wanted to jump in it and spend the day there," said Ben Ernest, 11, of Great Falls. "They had everything you need for a good day at the pool, the noodles, the floats and the toys, plus it could drive me back and forth to my house while I swam."

After the parade, guests headed back to the green to participate in a variety of games and activities.