On the Lookout for Eels
Votes

On the Lookout for Eels 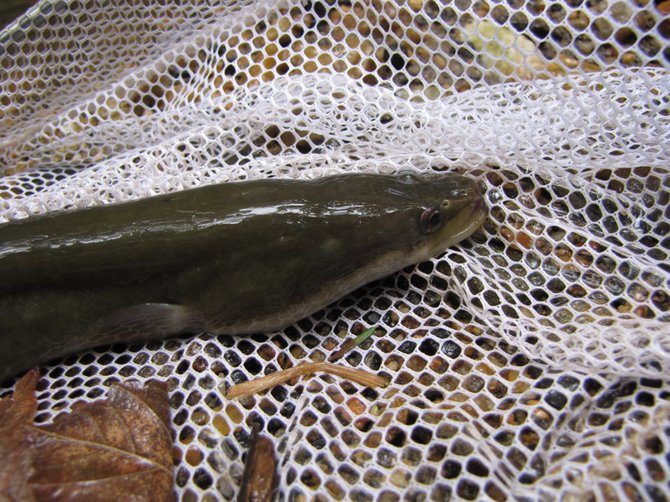 The American eels found in Arlington are exclusively female, and can spend up to 15 years maturing in local waterways before their long voyage to the Sargasso Sea in the Caribbean. Jen McDonnell

There’s something slimy in Arlington’s water systems. Hidden beneath the surface, slithering under sediment, and as likely to call sewers as well as streams their home is the Anguilla rostrata, or more commonly known as the American eel.

These unappreciated and relatively unknown inhabitants of Arlington’s waterways are catadromous creatures, and they are just as happy living in fresh water as the salty sea.

This summer consider joining the Arlington Stream Monitoring program for the best chance to catch the American eel in its natural and urban environment. Teams of monitors hit the headwaters of Arlington three times a year to collect macro-invertebrates, species that lack backbones, which indicates the overall health of the aquatic ecosystems.

“The teams collect valuable information for our office, it tells us if the waters are getting better or worse,” said Jen McDonnell, a naturist with the Arlington County Department of Environmental Services. “When people ask what type of fish we find, and I mention eels, they say how can we get rid of them? But we want them, they are native species, not invasive, and we as a county are happy to have the eels. They are supposed to be here, this is their home.”

American eels have traveled a long way to make Arlington home. Their journey begins in the Sargasso Sea in the Caribbean when the eels hatch, and spend upwards of a year floating and swimming to the eastern seaboard, changing from larvae to transparent “glass eels” along the way. The eels change once again when they make it to the Chesapeake Bay, turning into brown 2.4 inch-long “elvers.” The genders then part ways, as the males prefer brackish waters, and the females traverse rivers to their maturation points in the freshwater estuaries. In some cases the eels live in Arlington for up to 15 years, and grow up to five feet in length, before they migrate back to their breeding grounds in the Caribbean where they spawn and die.

“The eels have a very complicated breeding system, they’re very different from other fish,” said Alonso Abugattas, natural resources manager for Arlington County Parks. “They have been found in pretty much everyone of our tributaries. Eels use underground streams and sewers as migratory paths, the underground life of our cities is amazing.”

The eels are not bound by water, as they can slump their bodies ashore and wiggle their way over land to reach the next waterlogged destination. Don’t expect to find them so easily, however, as they prefer the nightlife and are skittish by nature due to an abundance of predators.

Eagles and ospreys especially enjoy a slithery snack, but the most deadly predator is man. According to Abugattas, Virginia is a primary supplier of eel for Europeans, many of whom consider the eel to be very edible.

“Here in the USA they are not considered much, they’re good for baiting crab pots, but in Europe they are considered a delicacy,” said Abugattas. “The ones people eat are the bigger ones, but the biggest are females.”

It is particularly difficult to estimate the population of American eels in Arlington, but what is certain is that contaminated water leads to mass die offs. While accidental in nature, when water mains break along the 400 miles of Arlington pipes that carry drinking water the ecological impacts are disastrous.

“They are supposed to be here, this is their home.”

“There was a kill in Gulf Branch recently, a water main broke and the chlorine killed them. Chlorine is deadly for fish,” said Cliff Fairweather, a park naturalist at Long Branch Nature Center. “People are pretty surprised that we have eels in Arlington. Unfortunately they come to people’s consciousness when there is a problem in the streams; floating dead eels in a stream tends to catch people’s attention.”

Such die offs and a lack of proper tracking resources makes stream monitoring all the more important. “There’s a real need for volunteer monitors, especially in Northern Virginia. If there’s a leak in a pipe, and we find it and fix it, we can anticipate eels can come back,” said McDonnell. “There’s a lot of pressure on this animal, it would be nice for people to realize they are here too.”