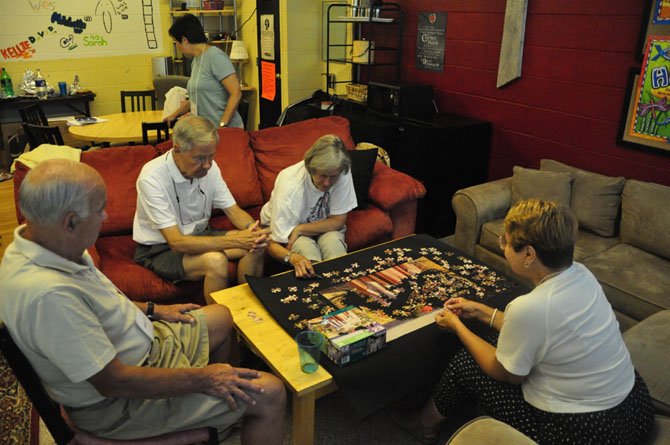 Members at the Memory Café at Andrew Chapel United Methodist Church work on a puzzle, which aims to help the patients and caregivers suffering from dementia, Alzheimer’s and other diseases, Photo by Alex McVeigh.

Vienna — At age 64, Carol Blackwell’s husband Bob was diagnosed with early onset Alzheimer’s Disease. Carol Blackwell, a resident of Great Falls, called the diagnosis "devastating" and found what transpired to be a struggle as well.

"When my husband was diagnosed six years ago, we learned that there were five million others suffering from this disease, but we didn’t know a single one we could talk to," Blackwell said.

Eventually Carol and Bob connected with another couple, Elise and Bill Schoux. Bill Schoux was diagnosed with early onset dementia in 2009. As caregivers to their spouses, Elise and Carol decided that a more social form of care might help. 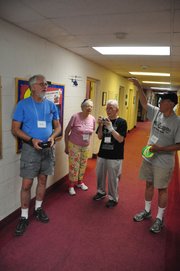 Participants at the Memory Café, which aims to help the patients and caregivers suffering from dementia, Alzheimer’s and other diseases, play with a remote control helicopter at Andrew Chapel United Methodist Church Thursday, July 5.

"We were given a prescription for Aricept (a drug used to treat dementia) and were told ‘See you in six months.’ I heard about something called a Memory Café in England, they partnered with the local Rotary Clubs, and learned about how to hold one on the web," Elise Schoux said. "And we started learning about how these cafes could evolve and be made better."

Their collaboration has resulted in two Memory Cafes, hosted at Sibley Hospital in Washington, D.C. and Andrew Chapel United Methodist Church in Vienna.

The cafes consist primarily of guests and their families playing simple games, such as darts, bowling, dominoes or puzzles.

"We don’t do things that are difficult, or that have a lot of complex rules, we want to keep everything pretty social, have people talk to each other," Schoux said. "You never know what’s going to help."

Both cafes last an hour and a half, and feature caregivers and their significant others, giving them all a chance to socialize, talk about their issues and treatments.

"Both people need a break, and this gives us an opportunity to do that in a caring manner," Schoux said. "We had one woman who would keep asking us our names, and we told her every time. Eventually she told us how happy she was that she could repeatedly ask questions without being snapped at or looked at funny."

The Blackwells have been members of Andrew Chapel UMC for more than 30 years. Their program, which takes place twice a month, welcomes patients from Great Falls, Reston, Herndon and Vienna.

"This is sort of a pilot program, we’re hoping to get more people and grow from here," Blackwell said. "The biggest challenge has just been to reach people and once we do that, we feel we can really help."

More information can be found by emailing Carol Blackwell at Lovriver@aol.com.