Envisioning ‘After the Apocalypse’
Votes

Envisioning ‘After the Apocalypse’

Reston — In a career spent working in international development, Reston resident David Anderson has seen his fair share of exotic locales and the issues they face every day. And his years of work taught him something. 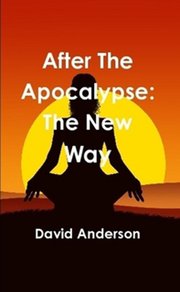 Reston resident David Anderson’s first novel, "After the Apocalypse: The New Way" has just been released, and deals with humanity’s struggle to survive after a worldwide collapse.

"What I concluded was that all these issues, they’re getting work, and all the agencies and initiatives aimed at improving things weren’t helping," he said. "We have a lot invested into trying to solve the world’s problems, but what if we can’t?"

That question was what inspired Anderson to write his first novel, "After the Apocalypse: The New Way." In it, Anderson tells the story of mankind’s near-extinction, and what can be done to rebuild society.

"In the financial crisis of 2008, there was concern that investors would pull their money out of the market, and that would have caused a collapse," Anderson said. "In my book, the same crisis happens, but there’s no way to slow the tide and there’s a run on the banks. The dollar collapses, followed by other monies, and then nothing works, no supermarkets, gas stations, water or electricity."

The novel picks up 285 years after mankind’s number have been reduced from several billion to about 10 million. They have reverted to humanity’s original state, hunter-gatherers who live in harmony with the land.

"I tell the story of a group of monks who have preserved humanity’s knowledge, and they come out of hiding to teach," he said. "They teach the new way, to live sustainably, not trying to change the land, but living with it."

The monks present their knowledge of humanity, which includes the culture and art that was lost, but with a caveat: humanity can know about it, but cannot put it into action. The story goes on to explore the intricacies of human nature, and whether or not it is possible for humans to continue to live in a sustainable manner.

Anderson admits he reads almost anything, from science fiction to mystery and historical fiction, but hadn’t done much creative writing before this project.

"I think there are things I can improve on, like character and scene development, but I wanted to bring out my philosophy and I think I achieved that," he said.

The book has been well received for the issues it raises.

"This is an intriguing allegory as David Anderson focuses on a New Way of life based on healthy harmonious relationships with others," wrote Harriet Klausner of the website Genre Go Round. "As expected with parables, most of the cast even the council symbolize aspects of life; except for the concerned Jules and the enthusiastic Joicila."

The book can be purchased at Amazon and at www.lulu.com. More information, as well as blog posts and discussions, can be found at www.aftertheapocalypse.org.