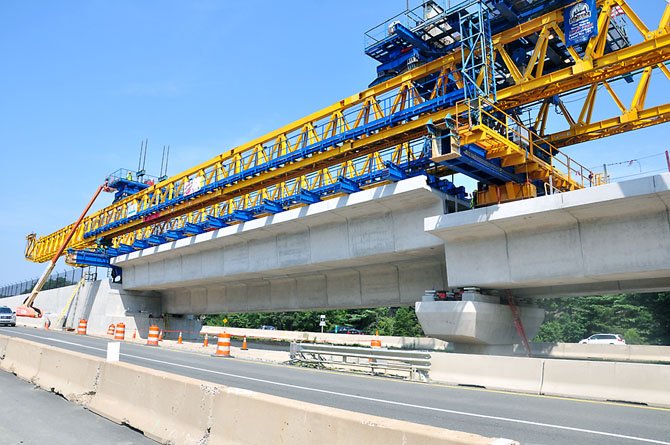 The final aerial span for the Tysons Corner Metrorail guideways is ready to be lowered into place Tuesday, July 17. Photo by Alex McVeigh.

McLean — Workers from Bechtel Construction placed the final aerial span for Metrorail in Tysons Corner Tuesday morning, the last of 258 that will support trains as they make their way from Falls Church to Wiehle Avenue along Phase One of the Silver Line. 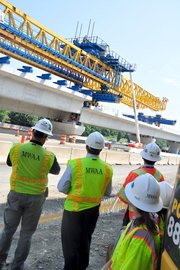 Workers watch as one end of the Metrorail aerial span is lowered into place Tuesday, July 17 at Tysons Corner.

"This is a major construction milestone for Phase One of the project, which will connect Tysons Corner and Reston to Metro’s existing Orange Line and the entire 106-mile Metrorail system," said Pat Nowakowski, executive director of the project. "We plan to complete construction this time next summer and Metro will open Phase One in late 2013."

The blue and yellow truss, which is a 365-ton, 360-foot long horizontal crane, lowered the span, which is made of concrete cast at Dulles Airport, in about 40 minutes Tuesday morning. The span includes 12 segments, each weighing between 25 and 40 tons.

"The aerial guideway has been one of the most challenging aspects of the project, as we had to carry out this work safely above busy highways and in a congested area," said Larry Melton, Bechtel’s executive director for the project. "Innovative construction techniques, the work of a dedicated and experienced crew and patience from the public were critical to the successful completion of the guideway."

The average span is made up of 12 segments and is 120 feet. The total length of the guideways required 2,769 segments to complete.

"With the completion of this guideway, if one were so inclined, they could now walk from Falls Church, through Tysons, all the way to the Wiehle Avenue station," Melton said. "But we do have fences and measures to discourage that of course."

Crews will spend the next four to five weeks dismantling the truss and will also begin laying track along the 11.7 miles between Falls Church and Reston.

"This is definitely an important milestone, and we’re very close to being right on schedule," said Sam Carnaggio, the project’s director from the Metropolitan Washington Airports Authority. "The tunnel through Tysons was completed some time ago, and after completion of the aerial structures, we’ll move on to connecting everything to the Orange Line."