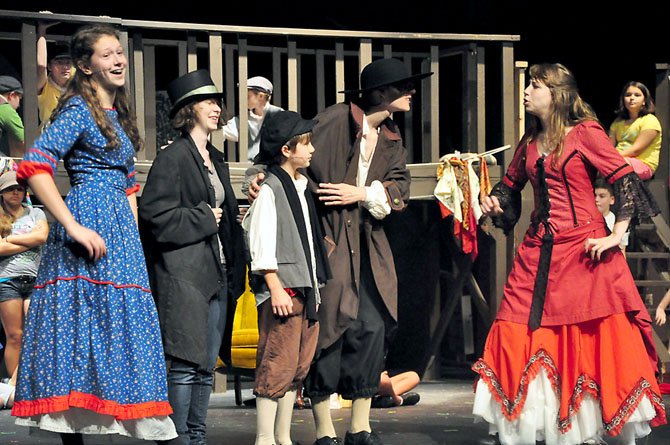 Tickets are $10, and are available at the door at showtimes, or online at www.herndondrama.org.

Due to it being a summer show, the production time was about four weeks until opening day, rather than two or three months in a normal, school-year production. While the schedule might have been hectic for the actors, who had less time to learn their songs, lines and choreography, tech director Justin Burns said he enjoyed the intense focus.

"I found it a little easier, there was no school and homework to work through, we could leave around 5 p.m. instead of being here until 11," said Burns, who just graduated from Herndon High School and will attend James Madison University in the fall. "We had to get a little inventive with how we saved time, we recycled and modified some set pieces." 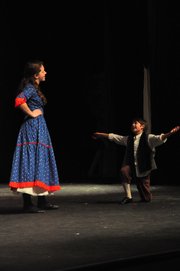 THE TITLE CHARACTER is played by Ethan Van Slyke, 10, a student at Hutchinson Farm Elementary School in Chantilly. He previously performed in the school’s production of "Beauty and the Beast" and "Macbeth."

"There were a lot of fun things I got to do, like get trapped in a coffin. I don’t think many people get to do that in the summer," he said. "I also learned a lot about memorization and stage combat, and I think I made some new friends here."

Alycia Adams, a rising sophomore at Chantilly High, says she thought it might be difficult working at a new school with new personnel.

"It’s been way more inviting than I thought, I was a little worried I’d be an outsider, but I got to know everyone pretty quick," said Adams, who plays the Artful Dodger. "Lunchtime has become my favorite part, no one is clique-y, it’s been great getting to know everybody."

This was the first time Adams had played a male, which she said was easy, "except for the dancing part, I had to learn how to lead. It was like learning backward."

Others felt their role was a big change for them.

"I played Mrs. Potts in ‘Beauty and the Beast,’ my biggest role, so this is a big change," said Megan Overton, a rising senior who plays Nancy. "I worked harder than I ever thought I could, but I think I grew as an actor. I never knew I could do a cockney accent, but after some work it came out pretty well."

FOR SOME STUDENTS, their role was a bit more familiar.

"I seem to play old people a lot," said Chris Hrozencik, a rising senior who plays Fagin. "But I haven’t done a lead since my freshman year, and this is the first one in a musical. It’s been a lot of memorizing."

Stage manager Cate Graney, who just graduated from Herndon High and will attend Christopher Newport in the fall, says the experience has been valuable for more than theatrical reasons.

"It was very different working with some younger kids, because we had a lot of rehearsals with them, but it was so much fun," she said. "I loved working with them, and I’m studying to be an elementary school teacher, so I got a lot out of it. And it was amazing seeing how talented they were."

Hunter Robinson, a rising junior at South Lakes, plays Mr. Sowerberry, the undertaker. He said his favorite part was getting to work with students outside his normal theater program.

"Everyone comes with new experiences, and there’s a wide variety of talents everybody brings," he said. "The best part about the play is that all the characters have their moments within the show, so it’s not just a bunch of characters telling a story, they’re actually going through something."