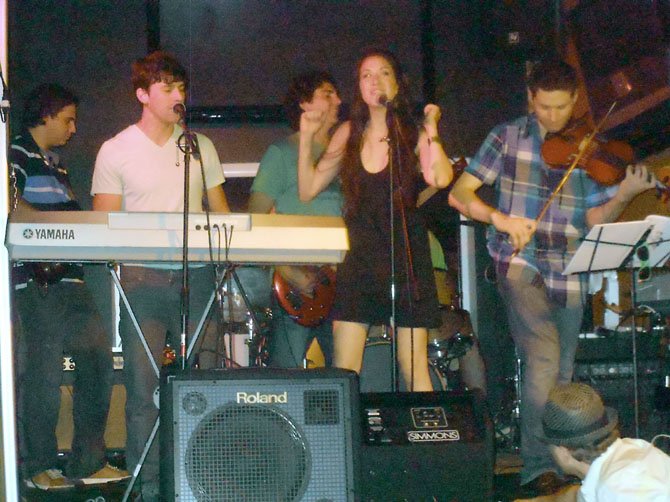 Reston — It was the start of 2009 when South Lakes High School graduate John-Currie Hester made a resolution to his fellow South Lakes graduate Guido DeHoratiis: to start a band. Soon they recruited a few other South Lakes alumni to join up and they started playing covers at shows around the area.

"I went to school to study music, but soon found that I couldn’t really get into things like German opera, so I switched to business," he said. "Once I got a job, I soon felt the pressure to satisfy that creative desire, so we started playing together. At first it just felt good to sing and play, we didn’t event think about writing. But we kept playing and growing together, and finally were coaxed into getting some studio time from friends with studio connections." 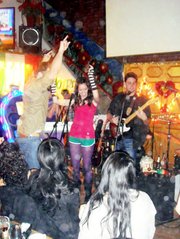 Turtle Recall, a band made up of several Reston natives, performs at a recent show. The band has just released their first album.

"We were all sort of connected to each other while at South Lakes, some were in chorus, or marching band or orchestra together, but we all had a connection," Hester said. "Soon the band, who christened themselves Turtle Recall, were in the studio recording what became their debut album "Thanks Anyway." During the recording process, the band found themselves evolving past anything they thought they could ever become.

"We knew it would be a big commitment to all of us, and not just in terms of time and money," said Girardi, who shares lead vocal duties with Hester. "As soon as we hit that go button, everyone sort of got into crazy mode, and by the time we came out, we had about 12 songs to choose from, some that weren’t even written when we started recording."

AS A BAND primarily used to performing live in front of friends and supporters, they found the studio to be intimate, uncomfortably so. DeHoratiis, who plays guitar and drums on the album, called the vocal booth "the dojo of self-loathing."

But Hester said while the vocal sessions did come with a lot of pressure, it went a little smoother than he thought.

"It was actually a little easier than I thought, I thought we would be agonizing over every syllable, but we ended up getting it out in about one or two takes, which was probably for the best," Hester said. "

"Once we got in there, it was exhausting, but each day felt like only five minutes passed, that’s how intense it got," Hester said. "I was crazy focused, people would try to lighten the mood, but I couldn’t stop."

Hester and Girardi sing the songs on the album, often alternating from section to section, or singing harmonies together. Since the two of them spent the most time in the vocal booth, it was only natural to turn to each other for guidance.

"We both have a sort of common ground, so I would look to John-Currie when it came time to decide how the take went, or whether we need to go again," Girardi said. "It was a varied process when it comes to deciding who sings what. Sometimes songs are written with one of us in mind for specific parts, other times it’s just a matter of a part being too high for his range, so it went to me."

Girardi’s creative ideas most often come in the form of voice memos recorded on her iPhone, sometimes a melody or collection of few notes.

"Sometimes it’s just the tiniest snippet of music, but they eventually became whole songs," Hester said. "I have to tell her that they just can’t stay in her voice memos, they’re not doing anyone any good then."

While Hester or Girardi come up with initial parts of most songs ("it's like I designed an engine. Erin is the ignition switch," he says), Hester calls DeHoratiis the "oil that makes the songs work."

The band’s distinct sound comes from fiddler player Matt Kupferman, who plays his instrument as if it were a lead guitar. Many of the fills and all of the solos on the album are fiddle, with a sound reminiscent of the fiddle on Bob Dylan’s "Hurricane."

The band Turtle Recall, which consists of several Reston Natives, has released their first album "Thanks Anyway."

AROUND FALL 2010, Hester started writing songs. Though the songs have a sonic resemblance to pop, rock, bluegrass and other genres, Hester’s songwriting doesn’t fit any of those styles.

"I mostly write just to serve the melody in as many ways as possible, I’m not too concerned with verses and choruses," he said. "It doesn’t have to be four chords repeated."

This is evident on most of the album’s tracks, where songs switch tone and feel on a dime, such as "Play Nice," where auto-tuned vocals and 80s-style keyboards quickly dissolve into a dissonant conclusion with heavy sythnesizers, distorted guitars and echoing, stomping drums.

Songs such as "New Wound," (the first song written by Girardi, as well as DeHoratiis) features tight, distorted heavy-metal style guitars segueing into fiddle solos, while the track "Nice Try" is more ballad-like, with a more plodding feel and long, drawn out fiddle notes.

"I think we keep the theatrical aspect in our songs," Hester said. "But even though I come from a more chorus-y background, I don’t want to lose sight of distorted guitars and big drums."

When asked what genre he would describe the band’s music as, Hester hesitated before rattling off "indie pop rock opera and roll," though he admitted, "I’m not sure how the ‘roll’ part really applies."

"We put a ridiculous amount of songs on his plate, the album we had just recorded as well as about 50 cover songs, and he’s done great in picking them up," Hester said. "We do a wide gamut, from acoustic sets to more pop like Lady Gaga, so it’s a lot, but he helps our dynamic so much."

The album also contains a hidden track, which serves as a semi-tribute to Reston. Recorded in Kupferman’s apartment, he pays tribute to Reston and Northern Virginia, while lamenting the lack of ocean.

"Born and raised in Reston, a very nice place to be, but times I think I’d like to be closer to the sea," he sings. "There’s plenty to do in Reston, the Town Center is OK, but the bartender at ATR (American Tap Room), he knows my middle name."

The band, their upcoming shows and three tracks from the album can be found at Facebook at facebook.com/turtlerecall and more information is also available at www.turtlerecallmusic.com.