As water level drops, RA encourages Hidden Creek to be a good neighbor. 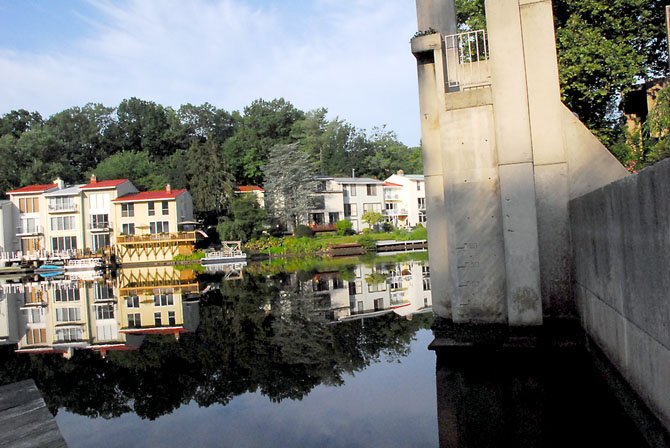 The dark lines on tower in Lake Anne show that on Monday, following the weekend’s rains, the water level of Lake Anne is still more than a foot below normal. Photo by Amiee Freeman.

RELAC, which provides air conditioning for nearly 400 homes around Lake Anne has installed pumpers to pull cooler water from deeper parts of the lake. As the lake level drops, debris is becoming more visible and is also a problem for RELAC.

Residents around Lake Anne have been watching the lake shrink over the past few weeks. With precipitation levels for the month of July below normal, the hot, dry weather is partly to blame. Evaporation is not the sole cause of diminishing lake levels, however.

"We have been here since 1973," said Vern Wingert, whose home is on Lake Anne. "Nobody remembers the lake being so low."

Nearby Karen Noel, who has lived on Lake Anne since 1984, said that she just closes her eyes to the lake. "It’s horrible. It’s very distressing."

Last week, before the weekend’s rains, the lake was three feet below normal, said Reston Association President and Lake Anne resident Ken Knueven. "RA has been hearing concerns from around the lake. Patience is being tested," he said.

Based on an agreement between the corporation that developed Reston in the early 1960s and the then-public/now-private club, Hidden Creek has the right to use water from Lake Anne to water its golf course and to keep its greens green. When Lake Anne was deeded to RA and even following Hidden Creek’s conversion from a public club to a private one, Hidden Creek’s right to Lake Anne’s water conveyed.

Muddy beaches have started to appear around the perimeter of Lake Anne due to the shrinking water level. Nearby golf course, Hidden Creek was determined by a judge several years ago to have "unfettered" access to Lake Anne. RA is encouraging Hidden Creek to be a good neighbor and reduce the amount of water they draw off of Lake Anne.

THE SHRINKING LAKE is exposing muddy beaches around the perimeter of the lake. Sticks and other debris that were once submerged are now visible. In addition to these aesthetic issues, the shrinking of Lake Anne is affecting the RELAC air conditioning system upon which nearly 400 households in the Lake Anne vicinity depend to cool their homes.

RELAC, which is owned by Aqua Virginia, is a unique, possibly one-of-a-kind, air conditioning system. The system pumps chilled water to the homes on its system. Inside the homes, blowers blow air over the chilled water creating cooler air. RELAC chills the water by pumping cold water from Lake Anne into chillers to cool the chilled water. As the lake shrinks and the water temperature of lake increases, this process becomes inefficient. To help solve matters, RELAC/Aqua has put in place temporary pumpers to draw in water from deeper and, therefore, cooler parts of the lake.

In addition to the complications caused by the warmer water, RELAC is having to deal with debris in the lake as well. The pumps pull debris into pipes, clogging the system. The system has to then be shut down to clear the pipes of debris.

Becker said that RELAC is running three chillers full-time to chill the water. In addition, he said RELAC’s two employees are working hours and hours of overtime to stay on top of the system. Becker said that in other systems Aqua operates, they do not have such a low ratio of employees to customers. "For RELAC we have two employees for nearly 400 customers. Nowhere else in Aqua do we have such a ratio," said Becker.

"Adjustments have to be made. It is prohibitive to operate in this manner year after year," said Becker of RELAC’s current operating system.

"I will never forget the judge’s words on that ruling. He said Hidden Creek has ‘unfettered’ access to Lake Anne," said Matthews.

MATTHEWS THINKS the current situation between Hidden Creek and Lake Anne is especially difficult when nearly 400 households rely on the lake level and RELAC for air conditioning. Also, he added that the RELAC system itself needs to be re-evaluated to determine if it is still a viable air conditioning solution.

"The most we can do is ask that Hidden Creek be a good neighbor. Obviously Mother Nature is playing a role in all of this. The lake is down three feet from normal level. Hidden Creek draws water off every night as is their right. I respect their business model and I understand their concerns. But when Mother Nature is being cruel, don’t exacerbate the problem," said Knueven.

"I don’t think Hidden Creek even makes any effort. It’s not that they don’t have choices. There could be a creative solution to this problem, I am sure. I wonder if they looked into the possibility of using grey water," said Noel, referring to recycled water. "Assumedly, other golf courses have similar problems. Do they drain nearby lakes? No."

Jon Patrick, general manager of Hidden Creek, did not return messages requesting an interview for this article. According to Knueven, however, Hidden Creek did agree to a face-to-face meeting with RA regarding the Lake Anne issue.