A Commitment to Social Justice
Votes

A Commitment to Social Justice

Walker discusses her faith as a Unitarian Universalist. 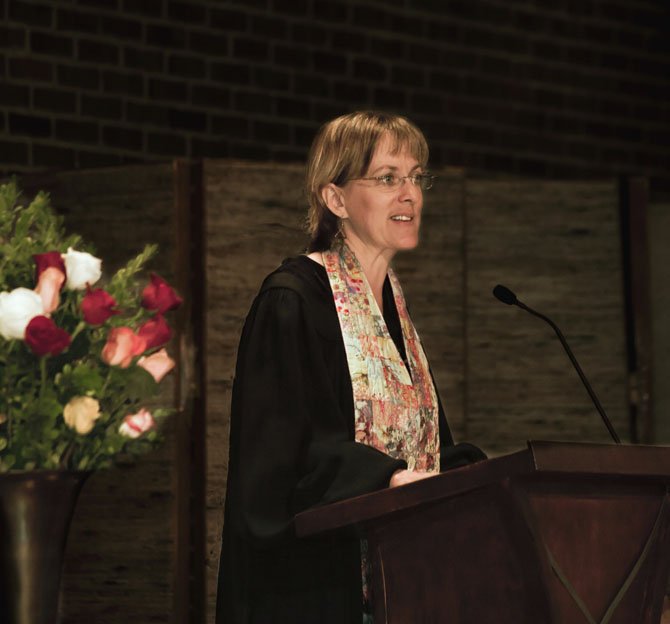 Mount Vernon — “I consider myself a mystical humanist,” said the Rev. Kate Walker of the Mount Vernon Unitarian Church, where she has preached for almost four years. “I put a great deal of faith in the human spirit, intellect and heart, but I am also very open to the depths of mystery and all that I can’t explain. There is a sense of divinity and sacredness in this world that I engage with on a daily basis.”

A California native, Walker was raised in Rhode Island as a member of the Unitarian Universalist Church, where her father was a minister. After interning at a TV station in high school, Walker earned her undergraduate degree in mass communications and speech communications at the University of Denver. She worked at a newspaper in Boulder, Colo., then served briefly in the Peace Corps in Costa Rica before earning her master’s degree in social ecology at Goddard College. She later worked for Greenpeace as an environmental journalist.

“I didn’t know I wanted to become a minister until I was in my late 20s,” said Walker. “I started to explore my spirituality and my faith. I was sitting at my kitchen table reading one Saturday morning and it hit me, the thought that I was going to be a minister.” Walker studied divinity at the Starr King School for the Ministry in California and was ordained as a Unitarian minister 15 years ago. She served at a church in Meadville, Penn. for 10 years before coming to Mount Vernon, where her congregation consists of approximately 330 adults and 140 children.

The Unitarian Universalist Church, formed by the consolidation of the American Unitarian Association and the Universalist Church of America in 1961, is a multi-faith institution predicated on the idea of one God instead of the Trinity. Universalism refers to the church’s belief in universal salvation.

According to Walker, what she likes best about her faith is its inclusivity. “We do not have any dogma or creed,” she said. “[But] we do have expectations on behavior and how we treat one another with kindness, compassion and civility.”

As at other churches, Unitarian services include readings, sermons and a choir that sings almost every Sunday. Walker said that her goal is to create a service that is “inspiring and intellectually thoughtful.” She said that in her most personally meaningful sermon, she referenced the Benedictine teachings of inclusiveness and addressed the difficulties that introverts have in welcoming strangers.

“Everyone has biases,” Walker said. “The more we are aware of those biases the more we can welcome others into our hearts.” According to Walker, the message of inclusivity is present in almost all her sermons.

Walker also believes in the strength of community. “One of my seniors a couple years ago woke up early on Sunday morning [and his wife] had died in her sleep,” she said. “He called me and he called the paramedics, and even before they had taken her he said, ‘I need to go to church.’ It spoke a lot about his need to be with his community surrounded by love in his day of grief.”

Walker’s church is committed to serving multiple generations. While Walker “[tries] to balance the needs of the older generation,” the church also offers classes for youth from kindergarten through high school. “It is about encouraging them to build their own inner confidence, to question, to explore, to find what their faith is all about as a Unitarian Universalist,” she said. “They can feel comfortable asking questions knowing that faith is a journey.” According to Walker, youth are encouraged to visit other places of worship and, in the eighth grade, are confirmed after learning about the church’s history, developing their own beliefs and conducting a church service. High school members also lead a service each year.

The Mount Vernon church is active within the community. It holds blood drives, cultivates a garden and donates produce to a local food bank. It is a certified wildlife sanctuary and hosts outdoor concerts and weddings.

The church also advocates for social justice. “[Both the Unitarians and Universalists] were very committed to creating what we felt was heaven here on Earth,” said Walker. The church supported the Civil Rights Movement and currently advocates for public education, gay rights and environmental awareness.

“We’ve always had a commitment to social justice because we feel it’s more important how we live our lives today,” said Walker. “We are committed to living a life of civility in a pluralistic society. I would say Unitarian means there is a unity that makes us one and Universalism means that there is a divinity that connects us. As a minister, my joy today is to work with people of multiple faiths.”