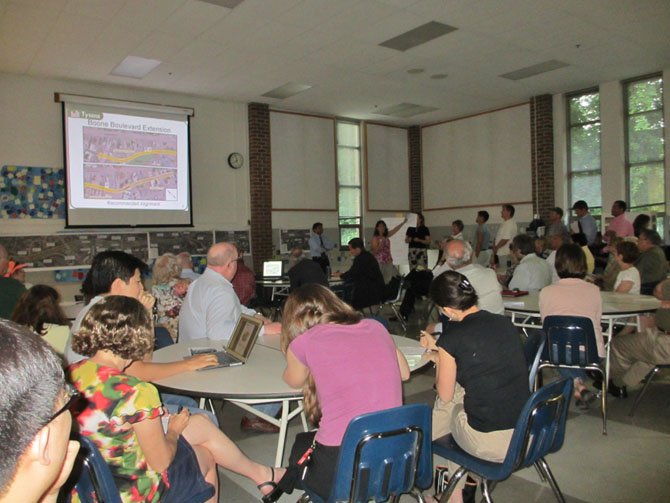 This map and diagram shows an overview of "option 3," in which a roadway would be cut through the last remaining forested parkland in Tysons Corner, Tysons Spring Run.

If remarks by residents and applause from the audience were an indication of the emotional climate at the open house meeting hosted by the Fairfax County Department of Transportation on May 31 at Westbriar Elementary School, the consensus was that the plan to extend Boone Boulevard, destroying Tysons’ only remaining forest, was a bad proposal that never should have gone to the table. That a developer – JGB – supports the position of homeowners, brought two traditionally-adversarial fronts together in a moment of unity.

The Comprehensive Plan for the Tysons Corner Urban Center calls for new roadways and ramps to intersect street grids – not yet finalized – and the Dulles Toll Road. What was clear from residents’ comments is that there is no logic in encouraging increased vehicular traffic in order to reduce it, and that the extension of Boone Boulevard, crossing Rt. 123 between Old Courthouse Road and Rt. 7, through the Environmental Quality Corridor [EQC], would result in permanent, sustained ecological damage.

THE THREE-HOUR MEETING drew more than 200 local residents, whose homes and quality of life are impacted by Tysons redevelopment. The construction of new roadways around Tysons seemed counter-intuitive to the goal of a more pedestrian-friendly Tysons Corner.

"Metro was to help bring in less cars, not encourage more," said one resident whose comments during the question-and-answer period received applause.

Fairfax County Department of transportation [FCDOT] representative Seyed Nabavi, with colleague Dan Rathbone, conducted a presentation, complete with maps, diagrams and Power Point, before opening the floor to questions. Residents questioned the answers given by Nabavi and Rathbone, intimating the answers made no more sense than the proposed options. FCDOT presented to the public meeting three options, including a fly-over bridge around the Tysons Sheraton Premiere, relocation of the electrical substation at Tyco Road, and cutting a swath of roadway through Tysons Spring Run forest, effectively eliminating the woodlands there.

"Our neighborhood opposes any ramp going through our parkland," said Pam Konde’, president of the Greater Tysons Green Civic Association, a 350-plus member grassroots organization. "That this option is even on the table is disgusting," Konde’ said to sustained applause. Referring to children at bus stops and neighborhood walkers, Konde’ said to the County representatives, "you are not looking at the safety or the impact on the people.

"The County needs to stop bowing down to the developers and start respecting the homeowners."

Another frustrated resident said, "we’re building throughways in our neighborhoods for people from other areas, like Herndon, to drive through to get to Tysons."

If there was a person in Westbriar’s cafeteria that supported Option 3 – the destruction of the wooded parkland – that person did not acknowledge his position. Of the more than 20 resident-speakers, not one agreed with cutting through the forest to extend Boone Boulevard.

"How is destroying our last parkland going to improve our quality of life," a resident asked. Tysons Spring Run empties into Difficult Run and the forestland between Westbriar Elementary School and the area abutting Westwood Center Drive abounds with wildlife and flora.

Another speaker described the morning traffic back-ups at Gosnell and Old Courthouse roads, with nowhere to go on Rt. 123. "Add another intersection [Rt. 123 and the proposed extended Boone Boulevard] there, and you’ll have absolute gridlock."

A representative of JGB developers agreed with "option 0," no extension of Boone Boulevard with a ramp to the Dulles Toll Road. The extension would cut through the Sheraton’s property, owned by JGB.

BUILDINGS ARE GOING UP, said Westbriar area resident Tom Salvetti, before the roads are in-place. "Once the buildings are up, they’ll take the path of least resistance. They’ll have to go through the EQC by default," Salvetti said.

An elementary school student said, "I might be a little girl, but I was born here and I’m willing to fight for this."

Westbriar resident Judy Lewis expressed what many of the residents attending the meeting said while talking with one another. "It was just so vague, they never gave good reasons for what they wanted to do. It meant nothing.

"We love the area. Part of the appeal is the small-town feel, the neighborhoods.

"It seems like they [Fairfax County planners] think they can do whatever they want until someone tells them they can’t."

For a detailed description of the proposed Boone Boulevard extension and exit ramps, courtesy of the Westbriar Crier, see http://wbcrier.com/exitplans.html, a publication of activists working to protect the interests of Tysons-area residents.