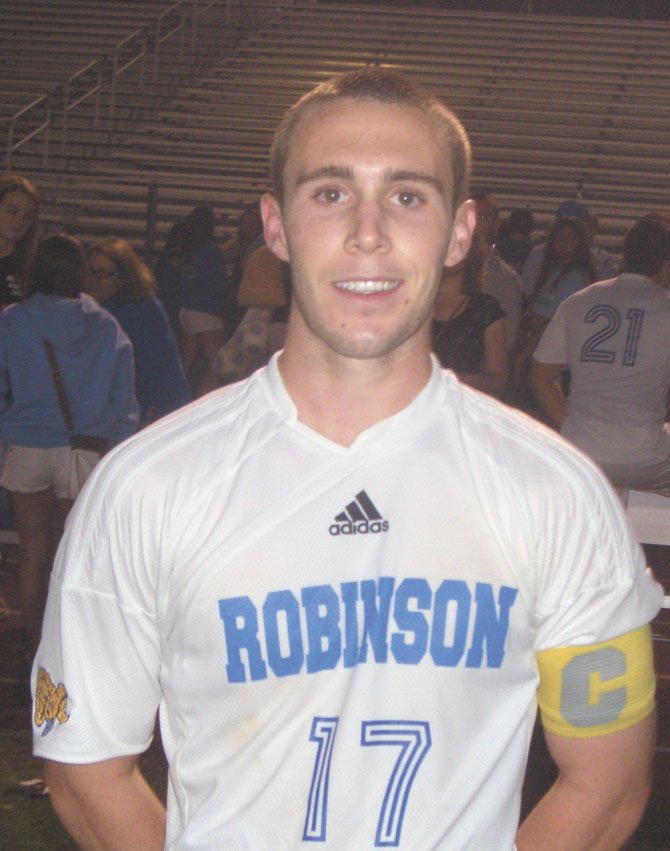 Sam Yardley, who netted the game-winner. Photo by Rich Sanders.

Burke — In a tense, back and forth championship game last Saturday night at Robinson Secondary, local high school boys' soccer opponents Robinson and Lake Braddock played with emotion, grit, and determination through an entire 80 minutes of regulation play and nearly 10 more minutes of overtime before the region title game's first and only goal was scored.

With 1 minute, 33 seconds remaining in a second five minute overtime session, Robinson midfielder Sam Yardley scored on a follow-up shot off the left side, breaking the scoreless tie and putting his team on the verge of victory. Following the goal, Robinson held off Lake Braddock over the final 93 seconds of play to clinch the win and give the Rams the region crown.

Robinson students swarmed the field in ecstasy at the final whistle, mobbing the Robinson players in spontaneous celebration.

For the Robinson program, it was the fifth region championship in the Rams' soccer history and first since 2009. Lake Braddock, which has captured eight region championships in its history, was looking to win No. 9 on Saturday night and its second in a row. But the Bruins, despite their best effort, fell just short.

"It felt unreal, like I was in the movies," said Yardley, of his game-winning score and fourth goal of the year. "It was in front of the home fans and the crowd went crazy."

On the goal sequence, Yardley took the ball down the left side of the field before taking a shot on goal from about 20 yards out. The ball was blocked with both hands by Bruin goalie Aaron Fausser. It caromed back towards Yardley who gained possession of the ball, made a dribble or two to position for a shot, then sent a short range chance into the left side of the net.

"I kicked it, the goalie blocked it with both hands and it came back to me," said Yardley. "I got the ball in open space [off the rebound]. I saw the goal in front of me and there was no defender [around me]. But they came in quickly."

Yardley, before the defense converged on him, scored off his left foot.

For Robinson (13-4-2), the finals win capped a region tournament in which the Rams won all four of their games in overtime - wins over Jefferson, Mount Vernon, Langley, and the Bruins.

"We worked our tails off at regionals, playing four overtime games," said Robinson senior goalie Josh Penn, who will play the sport collegiately on scholarship next school year at Virginia Tech. "We had endurance, stamina, and we pulled through."

Both Robinson and Lake Braddock, by reaching the region title game, qualified for this week's eight-team state tournament. There, Robinson saw its season end with a 1-0 state quarterfinals loss at home to Thomas Dale High (Chester) on Tuesday, June 5. Lake Braddock (11-9-1), meanwhile, won its first round game at Cosby High (Midlothian), 2-1.

It has been an up and down season for the Bruins, who endured a five-game losing streak earlier in the season but have gone 9-2-1 since. At regionals, Lake Braddock reached the finals with wins over Yorktown, South Lakes, and West Springfield.

The Bruins, under head coach Joe Soos, are next slated to meet Albemarle High (Charlottesville) in a state semifinals contest this Friday afternoon, June 8 at 2 p.m. The game will take place at Westfield High School.

IN SATURDAY'S REGION FINALS, both Robinson and Lake Braddock took their best shots at getting onto the scoreboard in what turned out to be a scoreless 80 minutes of regulation play. The game's momentum went back and forth. Goalies Penn (Robinson) and Fausser (Lake Braddock) played outstanding in the net.

Both teams had chances in the first half. Thirteen minutes in, Robinson's Ben Ferrel grounded a crossing pass from the right corner which scooted dangerously across the Bruins' goal area without a Ram player there to attempt a shot. Eight minutes later, Ferrel hit a scorching grounder on goal from 25 yards out. Goalie Fausser moved to his right to corral the attempt.

On another occasion, with 17 minutes remaining in the half, Penn leapt up to make a reaching catch off a long Lake Braddock throw-in from the right side. Right on him was Bruin player Aaron Hollins, hoping for a misplay.

Twelve minutes into the second half, Lake Braddock's Tyler Durbin sent a 40-yard direct kick from the right side towards the goal. Penn jumped up and deflected the ball over the crossbar and out of danger.

Moments later, Robinson had an excellent scoring chance following a penalty outside the box. Following the ensuing direct kick from the left, the Rams had two good scoring chances during a rush but could not connect.

There were more scoring chances for both squads thereafter, including a 12-yard liner shot off the foot of Robinson's Ferrel which was caught nicely by goalie Fausser moving to his left with just over three minutes left in regulation.

Ultimately, the game headed into the two five minute OT periods with the Rams finally prevailing on Yardley's score.

"It's an amazing feeling," said Penn, the Robinson net-minder, of the win. "We were pushing hard in the overtime. I knew we could get that goal."