Fairfax County’s "Fathers In Touch" program teaches men how to be fathers. 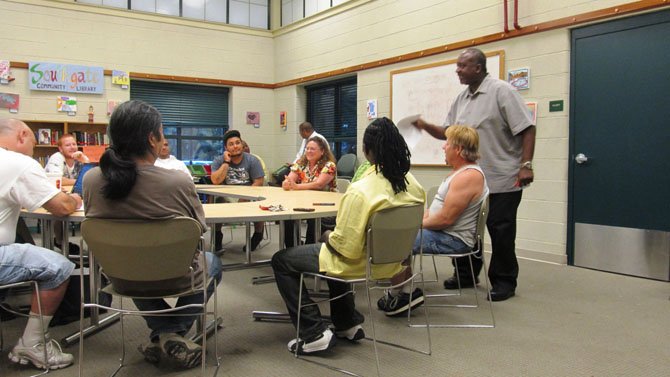 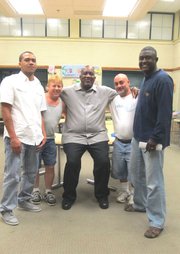 Calvin Robertson (center), a social worker with Fairfax County’s Department of Family Services, teaches the Fathers in Touch class at South Gate Community Center in Reston. He is standing with participants, from left, Marc Dixon of Reston, Jim Henson of Springfield, Joe Apkarian of Springfield and Mohamed Osman of Annandale.

*94 percent of the fathers reported significant increases in positive involvement with their children over a 12-week period.

*100 percent reported significant improvements in their perception of their role as fathers (i.e., improvement in at least two of four areas: investment, integration, competence, satisfaction). 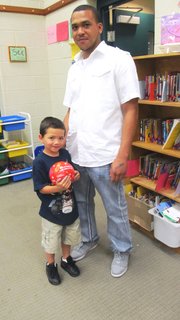 Marc Dixon of Reston, with son Anthony, 5, is a participant in Fairfax County’s Fathers in Touch program. Week four of the 12-week program was held at the South Gate Community Center in Reston last week.

Calvin Robertson slams his fist down on the table and barks instructions to the 11 fathers seated around the table at the South Gate Community Center in Reston.

A large man with a booming voice, Robertson wants them get a sheet of paper and start writing. Now.

"Did you hear what I said? I’m not telling you twice. Let’s go! I just told you what to do," he yells, sounding like a drill sergeant.

Robertson takes a deep breath, pauses, and then asks in a quiet voice.

"Okay, so how did all that anger and rage make you feel?"

"It stresses us out, man," said one young father.

"It gets us in trouble," ventured another.

"You say things you don’t mean…," one man said quietly. "You hurt people you care for."

"Is it productive? I mean, imagine how a child feels when you talk like that," Robertson said.

THE MEN, who call Robertson "Mr. Calvin," are part of the Fairfax County’s Fathers in Touch (FIT) program, a 12-week parenting class designed to develop committed, responsible fathers – men who are learning they can just as easily give their children a hug instead of a slap

In addition to the weekly two-hour sessions, the program includes three supervised visitation activities with children designed to promote strong relationships between fathers and their children.

"I know I’m successful when I see them interacting with their children in positive way," Robertson said. "That’s really the heart of this program. Watching these men show love and attention to their children."

Launched in 2010 through the Fairfax County’s Office of Public Private Partnerships (OP3) in partnership with the Department of Family Services, the FIT program was created by the Capital Youth Empowerment Program (CYEP) to address the "fatherless home epidemic prevalent in our society," according to CYEP literature.

Held three times a year throughout Fairfax County, the FIT program draws men from various walks of life, for many different reasons. Some men participate because they have to; a family court judge has mandated the program before they can visit their children again.

Some fathers are involved in vicious custody battles and want the FIT certificate to expand their custody and visitation rights. Some volunteer for the program because they want to be better fathers.

"I want my family back," said Joe Apkarian of Springfield, a 42-year-old father of three who, after serving a jail term, is fighting to regain custody of his young children from foster care. Apkarian has a 3-year-old biological daughter and two stepchildren. His goal is to show a judge that he is responsible and caring enough to raise all three together.

"This is for me to say I’ve done everything possible to get my kids back," Apkarian said. "My word is my promise, and I told my children I’d never let them be separated, but I had to hand my son over to a social worker when he was 9-months-old. You know how a lot of people say they wish they could win the lottery, win a million bucks? I don’t care. I just want my kids back."

Marc Dixon of Reston, who has a 5-year-old son, said he wanted to be a better father, and to show his son the love he rarely got from his own father. "My son means the world to me. I want him to know that I’m here for him," Dixon said.

Robertson, who was a probation officer before becoming a social worker, is also a single father of three daughters. "I can relate to these guys. I know how stressful it gets, but I try to teach them how to calm down, and to listen and to see things from a child’s perspective," Robertson said. "With three daughters, you can bet I’m a good listener."

BEFORE EACH SESSION, Robertson calls the fathers several times to establish a rapport with them, and to make sure they are committed to the program.

He said each session addresses a theme, such as male stereotypes, self-esteem or anger management. But the first session always tackles the biggest elephant in the room: the men’s relationship – or lack of relationship – with their own fathers.

Growing up estranged from his own father, one man decides to give his sons a different life: http://www.connec...">Learning from His Father’s Mistakes

"Sometimes there are tears, and a lot of pain, when we explore that relationship," Robertson said. "Many of the men have to overcome what they’ve been taught, ‘don’t show emotion,’ ‘only girls cry,’ ‘a man can’t show weakness.’"

Robertson said some of the men come from abusive homes or homes where the father was absent, so they have no role models.

According to the U.S. Census Bureau, 24 million children in America, about one in three, lived apart from their biological fathers in 2009, up from 11 percent in 1967. For African-American children, the figure was 64 percent in 2009.

Research from the National Fatherhood Initiative (NFI) has demonstrated father absence has a negative impact on many areas of a child’s life, including crime, teen pregnancy, child abuse, drug and alcohol abuse, education, and childhood obesity.

The NFI also reported that adolescents who have lived apart from one of their parents at some point in their childhood are twice as likely to drop out of high school, twice as likely to have a child before age 20 and 1.5 times as likely to be out of school or work by their late teens or early 20s.