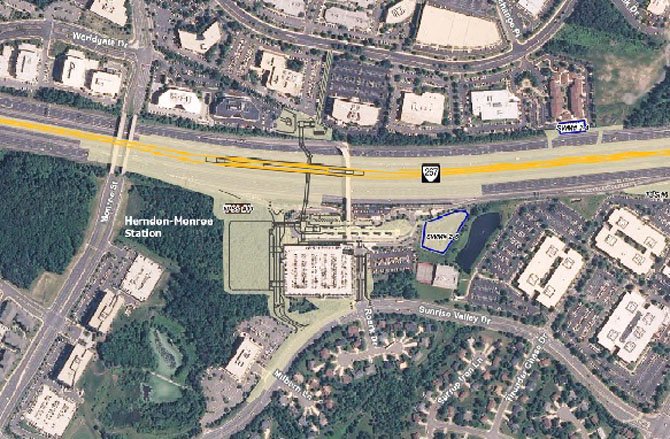 The updated design for the proposed Herndon-Monroe Metrorail station, which includes one larger parking structure instead of two smaller ones. Photo Contributed

In 2005, the Federal Transit Administration and Federal Aviation Administration issued records of decision (formal document stating a decision) about the project and its effects. The terms of both decisions stated that an environmental assessment would be needed if changes to the project were made and the effects were unknown.

"As preliminary engineering progressed, several design refinements were identified that required additional environmental review in order to comply with federal regulations and environmental statues," said Karl Rohrer, deputy project director of Phase Two for MWAA. "The environmental assessment document was prepared to describe and document the changes in environmental effects and to compare those effects to those previously disclosed."

For the proposed Herndon-Monroe station changes, they will all occur on the south side of the Dulles Toll Road. The facilities were modified to include a single parking structure on the west side of the station, instead of the previously planned two structures.

"The total number of new parking spaces will remain the same, 1,750, but because the new structure would accommodate more parking, it has a larger footprint and will be slightly taller," Rohrer said.

Other changes along Phase Two include reconfiguration of station entrances, access roadways and bus facilities, location of storm water management facilities and traction power substations and a reduction in tail track length.

Rohrer said that none of the changes would involve neighborhoods, park and recreation areas, geologic resources or air quality.

Most attendees at the hearing said they were in favor of the proposed changes.

"I think it’s a good sign that, while they’re trying to reduce costs and make Phase Two an efficient project, that they’re not doing it at the expense of the land around it," said Jay Ghent of Reston.

Jeff Fairfield of Herndon said "shepherding the limited resources we have to make available to make this Phase Two project a reality in a method that’s most consistent with the public interest."

Public comment on the changes can be made until June 25, by e-mailing eacomments@dullesmetro.com, or writtentestimony@wmata.com. Letters can also be mailed to Karl A. Rohrer, 1593 Spring Hill Road, Suite 300, Vienna, Va. 22182; or Office of Secretary, Washington Metropolitan Area Transit Authority, 600 Fifth Street NW, Washington, DC, 20001. They can also be faxed to 202-962-1133.