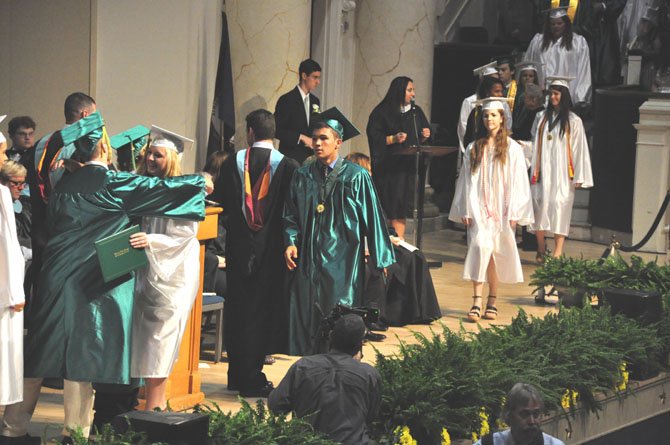 Members of the Langley Class of 2012 receive their diplomas at DAR Constitution Hall Thursday, June 14. Photo by Alex McVeigh.

McLean — Almost 500 seniors graduated from Langley High School Thursday, June 14 at DAR Constitution Hall. The Class of 2012 sent 486 seniors across the platform, with most looking ready and eager to take on the next phase of their lives. 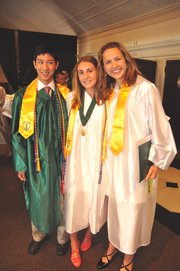 "What stands out about this class is the way we have perfectly managed to balance the old and new traditions at school, balancing our roles as traditionalists and sometimes pioneers," said Suzanne Kim, Student Government Association representative for the Class of 2012. "We were agents of change during our time at Langley, and I think that’s the single biggest thing that defines us."

Ryan Natal, class president, recalled the four years that had gone by, from "being shown around by seniors who seemed like they were all nine-feet, eight inches with full beards" to a class that left its mark on their school.

Principal Matthew Ragone started out when the Class of 2012 were freshman, and he handed out several awards. For the first time ever, he handed out the Principal’s Service Award, to Holly Dodd.

"In her four years at Langley, she has been a leader in every sense of the word, not just an elected officer, but a leader in the halls, in her neighborhood, with her peers and the administration," he said. "Whenever she came to talk to us about an idea or a project, we couldn’t help but say yes. We were forced to say yes no matter how daunting the project, because she was so convincing. We would watch her deliver extremely well researched and thorough proposals and wondered how anyone got anything done without her."

Ragone said it would be possible for future seniors to receive the award, but "it will only be given if they are able to rise to the level of this dynamic and compassionate young woman’s service to her community and her country, and she’s certainly set a high bar."

Ragone also awarded Alicia Underhill with the Principal’s Award, and the faculty recognized Lyle Jadacki with the Faculty Award.

Langley also distinguished itself in service outside of the classroom, which was highlighted by the keynote speaker, Director of National Intelligence James Clapper.

"One of the things that has most impressed me about Langley is your dedication to service," Clapper said. "You young people endanger us old people. You’re eventually going to replace us and as we fade away, you’ll take hold and be the ones assuming positions of power sooner than you think. Our nation and the entire world will be in your hands, and I have no problem with that. Because from what I’ve seen of the Langley Class of 2012, you have no problem serving your community and your nation. And when you take over one day, I believe you’ll be the best yet."