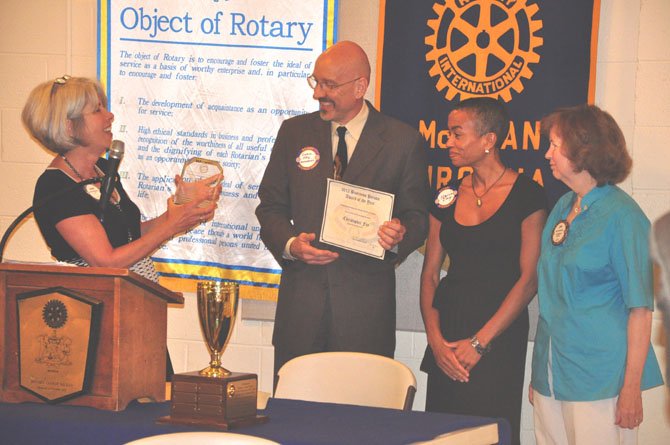 McLean — The McLean Rotary Club named its Business Person of the Year during their Tuesday, June 12 meeting, honoring Christopher Fay of Homestretch, a Falls Church-based nonprofit that provides homeless families with the ability to secure permanent housing, as well as obtain the skills needed to obtain self-sufficiency.

"Our first conversation with Chris was one of the most energizing, creative meetings I’ve ever attended, and I walked out of the meeting thinking I’m going to help this organization some way or another," said Jan Auerbach, president-elect of the McLean Rotary Club.

Fay has been director of Homestretch since 2006 and before that he was director of replication at the Eisenhower Foundation, which helped work with families in the inner city of Washington, D.C. He also founded a social services organization in New York City to meet the needs of the underprivileged.

Fay said more than 60 percent of Homestretch clients are homeless because of domestic violence.

"What distinguishes these woman is that they were in a home where the abuser was so controlling that he had the bank accounts, the car, the house is in his name, and he probably didn’t let her have a job where she could make very much money," Fay said. "So in order to leave, she had to face homelessness. Domestic violence is the principal cause of homeless mothers."

FIVE PERCENT are survivors of human trafficking, 35 percent are fleeing other kinds of violence (such as genocide in Rwanda) and 10 percent are recovering from substance abuse.

Families stay in one of 65 dwelling units owned or leased by Homestretch for up to two years, during which they will participate in a number of self-sufficiency programs and learn valuable skills.

"We tell our clients to just focus on changing their lives and work as hard as they can," Fay said. "It’s amazing what people can do given that kind of support. Not everyone makes it, but our success rate is about 85 or 90 percent, in 2010 we reached 90 percent, but it’s an incredible array of services that can be transformative."

Various donors to Homestretch can help provide families with everything from refurbished bicycles to birthday cakes.

Fay recalled a woman who came to Homestretch who was only 21 years old. She was from Kenya, and was promised an education in the United States. The plane she was on instead took her to Mexico, where she was forced to work in a brothel for 10 months until she escaped.

She was pregnant because of rape when she escaped and gave birth on her journey to the United States, and after giving birth on the way to America, she was raped again and was pregnant with a second child when she arrived at Homestretch. When she got to Homestretch, she was so traumatized, she couldn’t even face a male.

"Two and a half years later, she became an American citizen, learned to drive and is now a registered nurse," Fay said. "Even with the horrible, horrible trauma in her background, she still retained her humanity, a sense of hope and was able to work hard. And now she has devoted her life to helping others."

Cherry Baumbusch, current president of the McLean Rotary Club, said she’s attended a Homestretch workshop twice and it was an amazing experience.

"It’s been a privilege to get involved with Homestretch and to see what they do," she said. "This is a very well-deserved honor for Christopher and his organization."

MORE INFORMATION on Homestretch can be found at www.homestretch-inc.org.