Squeals On Wheels Delivers Fun for All
Votes

Squeals On Wheels Delivers Fun for All 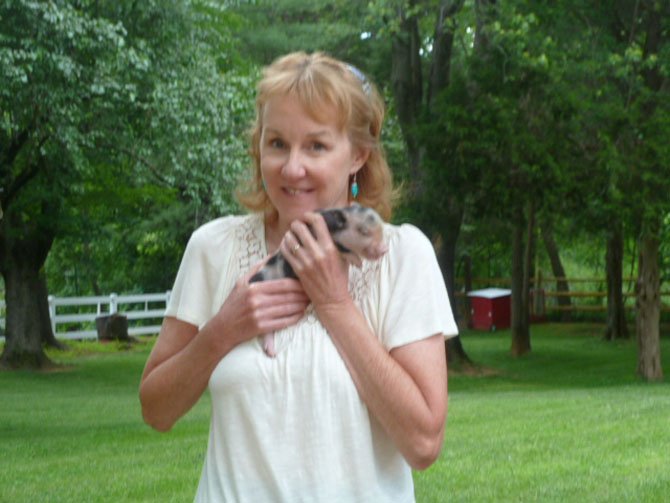 Jill Phillips with one of the petting zoo animals.

Potomac — Twelve years ago, Jill and John Phillips moved into their Brickyard Road home which was located on a two-acre lot. Instead of purchasing a tractor or lawn mower, Jill Phillips decided they should acquire a couple of alpaca to graze in their yard — and then they would not need to mow it.

Next, she decided she had to have goats, miniature llamas, iguanas, hedgehogs, pigs, chickens, rabbits, miniature horses, chinchillas, guinea pigs, pigeons, miniature ducks — and more. The two had been in the military for 27 years, and could not have pets since they moved so often. So she was making up for lost time.

The alpaca did not do the trick with the lawn, but the multitude of animals kept them and their five children entertained and busy. The Phillips decided to start sharing their animals with nursing home residents, and the idea was so well received that six years ago, they launched their “Squeals on Wheels” Petting Zoo. Now Squeals on Wheels is a tradition at school and community events, children’s birthday parties, nursing homes, festivals and children’s shows. 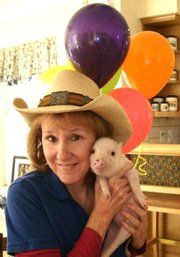 “We provide our petting zoo for three to four parties each weekend, along with other events,” said Jill Phillips. “The kids love having us come for their birthday parties because we really make the birthday boy or girl feel very special. Many times, we are asked back yearly because the children and adults have so much fun. Some of our specialty parties are ‘Barnyard in a Backyard’ which includes mini-chickens, mini ducks, rabbits, miniature goats, and alpaca and our 24” mini-mini-horse. The kids love seeing, touching and holding the animals. Another party is the ‘Dr. Doolittle Zoo’ with 20 or more animals including a hedgehog, chinchilla, a giant Flemish rabbit, a tortoise, miniature pigs and much more.” Other parties include the Bunny and Peeps, Bunnies and Buddies, Wonder Pets, and Pony Parties, featuring pony rides, pony decorating parties and pony and pals parties. Parties start at $175.

Besides bringing the joy of animals to children, the Phillips believe that teaching children about animals in one of their most important missions. They have created a program called “Fur, Feathers and Scales” which delivers an educational hands-on experience to children. They teach them about various species and focus on why animals have fur, feathers and scales — and how important these various coverings are to animals. They also teach the differences between mammals, birds and reptiles. Another educational program is “Ol McDonald Had a Farm” which features Cowboy John Phillips from Old McDonald’s Farm. He introduces farm animals to pre-school and primary school students while they sing the song. “I love it when we sing, “Here-a-duck,duck, there-a-duck,duck – and we pass around the duck for everyone to pet and hold,” said Jill Phillips. “We do about eight verses, and the kids just love singing and then holding the animals. It becomes more than just a song to them. They actually experience it.”

Jill Phillips recalls a time when she was supposed to be at Potomac’s Manor Care at noon to share the animals with the residents. She had not written down the appointment, and when they called to ask where she was, she told them she would be there in a few minutes. No one was available to help her take the animals, and the only car at home was her convertible. So she put 10 animals on leads and got them into her car with the alpaca and the pony sitting in the front seat, and the others behind her in the back. With the top down, holding the leads, she cautiously drove to Manor Care with all the animals looking out of the car and hoping that no one in the menagerie would try to jump out. When she arrived, it was like 10 clowns exiting a Volkswagen. The residents clapped as animal after animal came out of the car. It was indeed a zoo on wheels.

For more information regarding Squeals on Wheels, visit their website at www.squealsonwheels.us or call them at 301-765-0270. Jill can be reached through e-mail at jill@SquealsOnWheels.US.