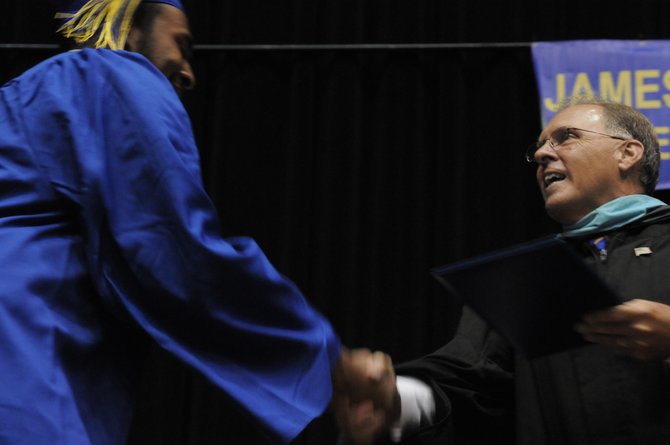 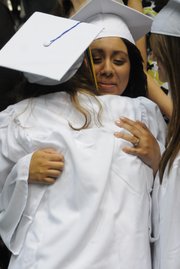 Seniors say farewell to each other at Robinson’s Commencement Ceremony on June 14.

The seniors enjoyed their last few hours as Robinson students at their graduation ceremony reminiscing about old memories and new beginnings. On May 14, in the Patriot Center at George Mason University, Robinson Secondary School’s class of 2012, their teachers and parents said goodbye.

Robinson Principal Dan Meier said, "It’s the charity and spirit that the students have that makes them great." He gave recognition to the 149 students with a 4.0 accumulative GPA, 113 with an International Baccalaureate Diploma and 25 students that received National Merit Scholarships. Robinson is among the top 100 schools in the nation and Virginia’s 5th best school.

"We take great pride in our academic success and are flattered by the ranking," Principal Dan Meier said in his opening remarks.

Chosen Class Speaker Camron Plunkett joked about the creator of Facebook, Mark Zuckerberg’s "greatest procrastinations tool" and the memories that students will carry on into the future. He remarked that students are never given "instruction guides" to life after high school.

Commencement Speaker Assistant Principal Terrence Yarborough felt like a "proud father" to each Robinson graduate. His advice was if they lived at home they must pay rent. Among the jokes told, Yarborough said that Robinson produced "strong leaders and great followers."

One by one, students received their diplomas. The traditional air horns from the audience and the occasional beach balls bouncing among the graduates couldn’t mask the overwhelming emotion that came after the ceremony. Outside students and parents alike were clashed between excitement and sadness.

Graduate Andrew Steger presented the 2012 class gift during the ceremony. "There are too many great memories from high school, but graduation has to be one," said Carly Buckholz, who will be starting school in the fall at the University of Virginia. Both students were a part of Robinson’s Student Government Council and given special recognition during the ceremony.

Robinson Secondary School comprises both middle and high school, many of the graduates have been Robinson students for the last seven years. Principal Meier mentioned that 16 graduates will be joining the U.S. military. Distinguished guests included Congressman Gerry Connolly (D-11) and State Sen. Chap Peterson (D-35).