‘How a Community Comes Together’
Votes

‘How a Community Comes Together’

A progress report on the Centreville Labor Resource Center.

Centreville — It still has a long way to go, but things are definitely looking up for the Centreville Labor Resource Center (CLRC). The community’s immigrants are finding jobs and less people are hiring them from streets outside the library and shopping centers.

The CLRC is run by the nonprofit Centreville Immigration Forum (CIF), and those involved with the center recently gave an update on its operations. After a slow start in December and January, more employers are now going there, which means more jobs for local residents. 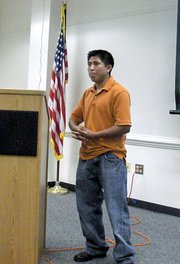 Marcial Quinilla-Santos expresses his gratitude to the CIF for the labor resource center.

“Our primary mission is to move the work negotiations from the street to the center,” said CLRC Director Shani Moser. “And we’ve seen incremental growth in jobs.”

In March, the center registered 52 new employers and had 14 repeat employers. This activity resulted in 96 jobs for 107 workers, so some employers hired more than one worker at a time.

In April, 157 workers were hired and there were 52 new employers registered. “There were also 44 repeat employers — which says a lot about their level of satisfaction with the center and its workers,” said Moser. “They have a positive feeling.”

In May, the workers went on 152 jobs and there were 42 new employers registered, plus 41 repeat employers. Some 32 new workers also registered with the center. Furthermore, said Moser, “The job numbers don’t include the number of workers picked up by employers at their homes. And the majority of the jobs had a pay rate of $12/hour.”

June job and volunteer statistics have not yet been compiled but, by the end of May, 73 volunteers helping the center had already given more than 1,100 hours of service since the center opened.

“We offer ESL classes and trade education, such as lessons in electrical work,” said Moser. “And we give classes in topics such as personal-finance management and taxes. A dentist has checked the workers’ teeth here and offered lower-cost care at his office, tax lawyers have come in to talk about the importance of income tax and health-care professionals have asked how they could help us, too. So we’re all learning about how a community comes together.”

“Some of the workers are volunteering, as well,” she continued. “We adopted a highway and did trash pickup, and the workers did publicity about the center. These things make them feel more a part of the community.” 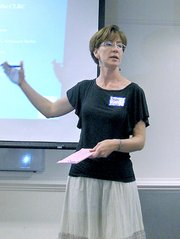 Moser said they’ve mainly been hired for landscaping and painting, with 67 percent of the jobs coming from homeowners and 33 percent from contractors. CIF member Bill Threlkeld said that was “roughly the same division” that the former, Herndon day-labor center had when he ran it.

“We’ve also received many good testimonials from employers about the workers,” said Moser. “They talked about the workers’ expertise, how nice and pleasant they were and how they cleaned up after themselves, too. Some employers have come in and asked for the same workers [they hired previously], and it’s so nice seeing those bonds starting to form.”

Overall, she said, the CLRC benefits the community by the work it does and by removing most of the immigrant job-seekers from the streets. “Some contractors still come around there, and we need to break that,” said Moser. “It’s our biggest challenge. We want them all here in the center in a nice, safe community.”

At a recent CIF meeting, worker Larry McIlwain said the center’s a “great thing” for those who use it. “We’re like family and we want to do something good,” he said. “The people at the center make you believe in yourself and that you can do whatever you want to do, if you set your mind to it.”

Agreeing, worker Luis Lucas said it’s wonderful having the CLRC. “It’s worked well and we feel safe here,” he told the CIF members. “We’re not exploited like we were on the street. Thank you for the opportunity, and may God bless you all and your efforts in making this a reality.”

“Everybody here has helped my level of living,” added worker Marcial Quinilla-Santos. “I’m very thankful to all of you.”

Moser said the center has received many referrals from satisfied employers, but the lack of signs directing potential employers from Centreville’s streets to the center is “one of our biggest obstacles. We’ve distributed door flyers and are working now on signage to give us better visibility so people can find us.”

She said the CLRC’s skilled labor force makes it different from similar centers. And in May, the center began a specialized, peer-education project in which the more-skilled laborers share their knowledge and expertise with the less-skilled ones.

“We learned that, when our employees can’t do something, they don’t take the job,” said Center Organizer Molly Maddra. “In April, we had to turn down some jobs needing more-skilled workers, so we started this project. We’re one of the few, suburban day-labor centers, so we have different dynamics and our workers are close to each other. They also realize that, the more skills they have, the more jobs will come.”

So during the daytime, while waiting for jobs, workers needing to are learning things such as how to use power tools and cut and measure wood. Said Moser: “There’s a good division of labor and abilities, with painters and carpenters showing each other what to do.”

“We even have a tool-share closet because — [unlike in larger, more-urban labor centers] — we have a small pool of workers who know and are comfortable with each other,” said Maddra. “They’re making sawhorses and sandwich boards for signs, plus workbenches that can also serve as seating in the center.”

CIF President Alice Foltz then thanked Moser and Maddra for “their energy and hospitality and all the things they do every day that help make the center what it is.”