Looking Back and Going Forward
Votes

Looking Back and Going Forward 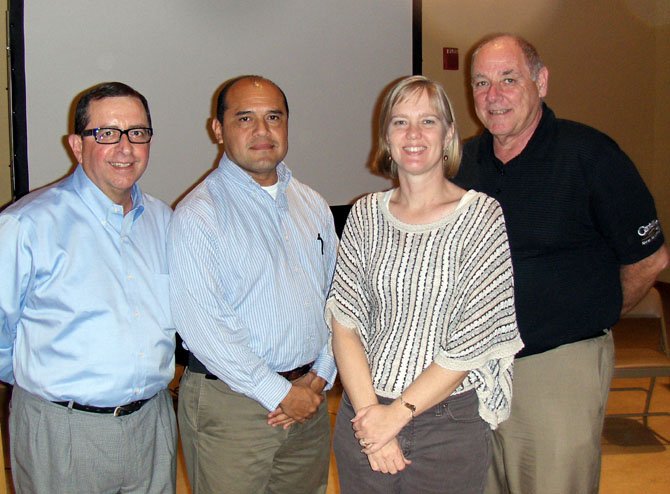 Elected to three-year terms on the CIF Board of Directors, beginning Jan. 1, 2013 are (from left) Carlos Cunha, Luis Flores, Terry Angelotti and Ed Duggan.

Centreville — The Oct. 23 annual meeting of the Centreville Immigration Forum (CIF) came full circle. Members honored the past year’s accomplishments and the former director of its labor resource center, heard a budget update, installed four board of directors members and planned for the future.

“We’ve had an amazing journey since our last annual meeting,” said CIF President Alice Foltz. “Looking at our 2011-12 achievements, certainly the big one was the opening of the Centreville Labor Resource Center (CLRC) in December 2011. 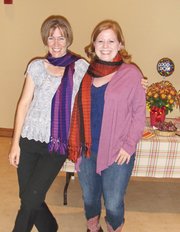 Shani Moser (left) and Molly Maddra wear scarves given to them as gifts and made by the mother of one of the workers.

Shani Moser was the center director and Molly Maddra, its coordinator/organizer, and Foltz praised them both. “It was wonderful to see how Shani, supported by Molly, put together the procedures and methods of operation to make this work,” she said. “Their dedication and determination made it happen.”

The CIF runs the center’s daily operations, and Foltz said the April 2012 international festival fundraiser raised about $4,000 to help keep the CLRC afloat. She also noted the formation of the CIF advisory council by Jim Daniels and Marci Huntsman.

“It’s 19 people who help the CIF and CLRC succeed, but can’t attend monthly meetings,” said Foltz. “We’ve gotten help and ideas from them about things such as marketing the center and fundraising.”

During the meeting, Terry Angelotti, Ed Duggan, Luis Flores and Carlos Cunha were elected to new, three-year terms on the Board of Directors. Then Duggan, the CIF treasurer, and Angelotti, chairman of the Finance and Fundraising Committee, presented a budget report. As of Sept. 30, said Duggan, the CIF had an income of $133,000 and $143,000 in expenditures, plus $71,000 in the bank.

“Basically, we’re in good shape financially,” he said. “We spent a little more than we raised, but that’ll change shortly.”

Angelotti said the 2013 CIF budget is $262,778. Moser resigned as center director in September to teach Spanish at Madison High, so under administrative costs is the salary for a new director. “The maximum is $55,000, but the new one would probably start lower and get raises,” said Angelotti. “Molly [now the interim director] has been increased from part time to full time at a salary of $35,000.” 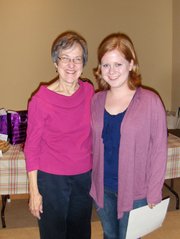 In addition, said Angelotti, “We’d like to hire a part-time position for $15,000, and the director would decide what that person would focus on. There’s also funding for relief and substitute staff for vacations and workshops.”

She said CIF operating costs will be “just over $20,000 for professional development consulting to increase our income and do more community outreach. The center’s operating costs will be about $82,000, but a lot of that is Al Dwoskin’s in-kind donations [of the space and utilities]. The only capital expense is $1,000 for possibly purchasing a printer and other equipment and/or repairing equipment.”

Acknowledging Angelotti’s grant-writing talents, Foltz said the CIF is always concerned about raising money. “It’s necessary to always find new foundations for grants because they don’t give you a grant forever,” said Foltz. “We’ve done great to get these grants in a recession, but it’s been due in large part to the hard work of Terry and her committee.”

However, said Angelotti, “Having a well-run center accomplishing its goals goes a long way toward attracting grants.” Foltz said the center’s also received many contributions from individuals, with most people donating $100 or less. Said Angelotti: “The $100 level is the largest category.”

“A number of churches in the area have been very generous, as well, giving us regular support throughout the year,” said Foltz. “And our Communications Committee is going to improve our Web site to increase the center’s online presence.” She said the CIF is also considering becoming a nonprofit in its own name, instead of via Virginia Organizing.

Looking back at the past year, Moser said, “We’re soaring and have gone beyond our goals of helping the [immigrant] workers find jobs. And we’re finding that more of the community also needs employment help.”

Noting a “continued desire to learn” on behalf of the workers, Moser said the center was beginning an evening electricity class Nov. 9. “We’re also establishing volunteerism by the workers within the community,” she said. “And I look forward to following what the CLRC is going. I think the most important thing we achieved this year is the growth of community within the center. Thank you for this opportunity.” 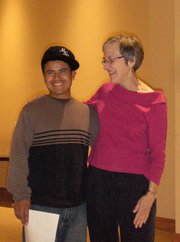 Then Maddra discussed the center’s employment picture. “In the past 10 months, the income generated through jobs going out of the center is about $73,000 – and that’s a low estimate,” she said. “I’d say the true number is closer to $100,000 because [the other figure] doesn’t include street pickups – or cases where workers and employers meet in the center and make arrangements outside, or are picked up at their homes. Some workers also got permanent employment.”

She said the workers logged 1,895 hours learning English. Adding that total to the other educational, occupational and financial classes they took, said Maddra, and it amounts to “2,145 learning hours through the center with no money spent. The funds came from a movie project we held, plus worker donations.”

According to Maddra, 654 individual jobs were obtained through the center and 982 workers were employed. “We now have 347 regular workers and 307 registered employers,” she said. “And we also want to put out fliers three times a week – including in Ashburn and Gainesville – to get more jobs.”

Regarding other future goals, Maddra said the CIF wants to increase the center’s educational reach and peer workshops, in which the workers teach each other their specialized skills. “They’re part social and part learning, and there’s nothing wrong with that,” she said. “The workers learn new skills and also what they’ll face in the context of the workplace.”

Foltz said the center has also received “an incredible number” of volunteer hours. Stephen Vandivere chalked up the highest total with almost 300 hours.

She also said a fond farewell to worker Miki Carrillo, who planned to return home to Ixil, Guatemala, sometime this month. “He’s served on the board since the center was organized,” said Foltz. “We wish him good luck and Godspeed and thank him for all he’s done.”