Sharon Bulova presented Al Dwoskin with a plaque of appreciation from the CIF. 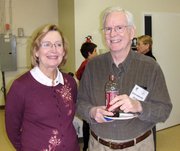 From left: Patricia Marino and Stephen Vandivere at the celebration.

From left: Barb Shaiko, the Rev. Marci Huntsman and Harriet Graves chat during the event. 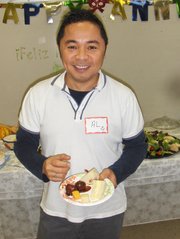 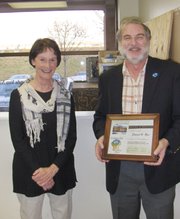 When the Centreville Labor Resource Center (CLRC) opened a year ago, it was with high hopes that it would become a safe and successful place for local day laborers to meet with employers to obtain jobs.

It started slowly, at first. But as people became more familiar with the center and the caliber of its workers, word spread and more employers came there — instead of to the streets — to hire them. Now, things are going well and, on Dec. 1, the community gathered to celebrate the CLRC’s first anniversary.

The Rev. Marci Huntsman of Centreville United Methodist Church gave the invocation. “Lord, we have been blessed with kind and generous hearts and hands so this place could open,” she said. “We ask you to continue blessing this place and the people involved with it.”

But things weren’t always so warm and welcoming for Centreville’s mainly Guatemalan-born immigrant community. Until the CLRC opened, the day laborers looking for jobs stood outside the Centreville Square Shopping Center, on the outskirts of Centrewood Plaza and near the Centreville Regional Library. And that led to tension in the local community.

Store owners said the men’s presence discouraged customers from patronizing their businesses. And some mothers felt uneasy bringing their children to a library with men standing outside.

Meanwhile, the Centreville Immigration Forum (CIF) was established to help the local, immigrants. Members made contact with the workers, directed them to social services that could help them and their families, and connected them to churches offering English-language classes. But they were still hired from the streets.

Then in early 2010, Al Dwoskin, owner of the Centreville Square Shopping Center, proposed the idea for a worker center. He later donated one of his storefronts for it and agreed to pay for utilities if the CIF would run it. So the CIF began fund-raising and solicited grants and donations to hire a director and an assistant.

But it was an uphill battle.

“Many people here don’t know how toxic and unfriendly the environment was then,” said Al Fuertes, who teaches conflict resolution and mediation at GMU and who was instrumental in helping bind the workers and CIF volunteers into a cohesive unit. “I think constant dialogue and openness to the concept helped. This developed organically; it emerged from people just coming together and wanting to continue and explore more.”

Basically, said Fuertes, “We listened to people, regardless of their views, and that was important in trying to facilitate things. Now, it just feels so good, and I’m a guest at the center’s first anniversary — and my students continue to volunteer here.”

Before the center opened, CIF members invited the laborers to their meetings, had them develop the center’s rules and regulations and made sure they were an integral part of the new facility so they’d actually use it. Then Director Shani Moser and Coordinator Molly Maddra were hired, workers learned each other’s trades and employers began hiring them directly from the center.

Now each day, the CLRC makes sure the workers get paid for their labor — which didn’t always happen when employers picked them up from the streets. The center also fulfills the temporary labor needs of small contractors and homeowners and enables the workers to support themselves and their families.

According to CIF President Alice Foltz, over the past year, the CLRC has amassed more than 350 registered workers, 320 registered employers and 100 community volunteers. It’s also made more than 1,200 job placements.

At the anniversary celebration, visitors toured the center and viewed worker-created art decorating the walls. They also met the new director, Herndon resident Roberto Fernández, who replaced Moser after she left in September to become a high-school Spanish teacher.

Virginia Run’s Harriet Graves joined the center after becoming friends with Huntsman. “My husband volunteers and we’ve hired some of the day laborers to do yard work,” she said. “They did an excellent job; we had no problems. And my husband and I served Thanksgiving dinner here [at the CLRC] to about 70 people. I think this center’s just wonderful. More people in the community have noticed it and become involved because they’ve seen it become successful.”

“It’s amazing that here we are, one year later,” added Huntsman, who’s a CIF board member. She and her husband Ken also hired workers for yard work and were “100-percent pleased,” she said. “I’m also thrilled about the educational opportunities the center offers. That’s such an important part of empowering people to grow in many ways. And, of course, this was all done under Alice’s leadership — she’s an amazing lady.”

Maria Baylock, of Centreville’s Country Club Manor community, was delighted “to celebrate this milestone of this part of the Centreville community. And it’s great that the center gets so much support from Centreville.”

Addressing the crowd, Foltz said, “We’ve created quite a community here, and we’re glad you’re here this afternoon to celebrate with us.” Then she and Fairfax County Board of Supervisors Chairman Sharon Bulova recognized some people who had a major role in the center’s success.

Although Supervisor Michael R. Frey (R-Sully) couldn’t attend, his significance to the CLRC was acknowledged, and Bulova said she’d give him his plaque from the CIF at the next Board of Supervisors meeting. “What a heroic thing it was for Mike to do to support this center,” she said. “And it was not without political risk to him to do the right thing. Mike deserves a red badge of courage for doing this.”

“We thought, at some point, he’d say he’d have to step back because of the risk to him politically, but he never did,” said Foltz. “He continued to provide support. He understood we weren’t trying to solve problems nationally, but to help people in our community have a safe place to meet and find work.”

Bulova also praised Dwoskin for his contribution. “This is a great place where wonderful things are happening,” she said. “I’ve never worked with another corporate leader who’s stuck his neck out to provide a safe place for people to come and get jobs, training and legal advice.” After all, she said, the day laborers are “just people trying to work and have successful lives for themselves and their children.”

Presenting Dwoskin with his plaque, Foltz called him an “absolute visionary.” But Dwoskin noted that the CIF already existed when he got involved. “We’re supporters of what this center is all about, and Mike Frey and Alice deserve all the credit.”

In response, Foltz said, “Everybody here deserves praise for giving time, energy and money to make this happen — and the workers are grateful, as well.” Next, she honored Centreville dentist Jose Aunon.

“He volunteered to help the workers without access to dental care,” said Foltz. “He gave education and hygiene information, plus low-cost treatment to workers with acute problems. And he and his staff provided the basics for our Thanksgiving dinner for the workers.”

Accepting his plaque from the CIF, Aunon said, “I was born in Cuba and immigrated to the U.S. in 1961, and I’ve been through what they have, so it’s my way of giving back.”

Foltz also acknowledged Ed Rice for his financial support and the Centreville library for letting the CIF meet there before the center opened. And she introduced Fernández, who vowed to “continue the great work done over the past year and continue providing education and training to the workers in a positive environment.”