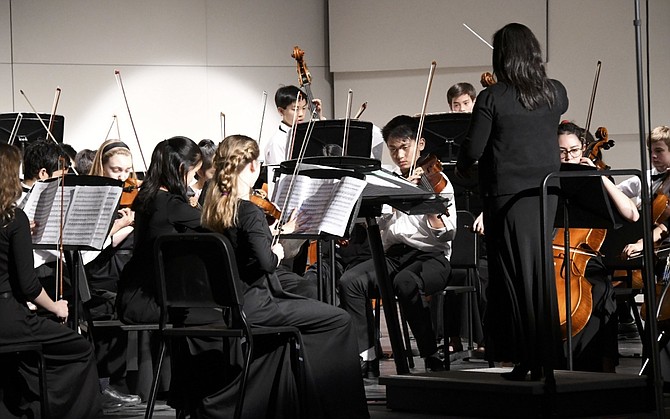 Continuing an exceptional season, the Langley High School Orchestra under maestros Dr. Scott McCormick and Adam Willett delivered a splendid performance of challenging Hungarian repertoire on Tuesday night, Feb. 26; this time, they were joined by the talented Cooper Middle School Orchestra playing various American and European music in the annual Pyramid Concert. Ensembles from both schools impressed the audience by featuring the rhythmic and melodic characteristics of music from Hungary. The night began with the Langley Concert Orchestra’s strong and expressive rendition of one of the world’s most famous Hungarian-themed pieces: Brahms’ “Hungarian Dance No. 5.” This piece’s distinctive, folk-inspired melody delighted concertgoers and was a wonderful way to get the full auditorium in the right spirit.

THE COOPER CHAMBER ORCHESTRA continued the concert with a well-executed performance of “Allegro Gustoso,” a lively piece composed in the classical tradition, conducted by music director Elizabeth Leung. This was the first of two Cooper ensembles to play, and a good opportunity to hear some of the musicians that will eventually comprise the Langley orchestra in the coming years.

Following these performances, the intermission gave the audience the chance to partake in a silent auction, where a variety of special products and services were up for bidding. Many families were able to purchase things such as gift certificates and tickets generously donated by families and businesses in the community.

The music continued after the break with three ensembles performing some very special music. The Langley Symphonic Orchestra’s performance of Berlioz’s “Rakoczi March” continued the Hungarian theme, featuring a melody that was formerly a state anthem of Hungary. Next, Cooper Middle School’s second ensemble, the Cooper Symphonic Orchestra took the stage, first presenting “Darkened Shadows” by Reznicow. This haunting piece left a great impression on the audience, but it was their performance of “Hungarian Rhapsody No. 2” by Liszt that drew the most praise. The ensemble’s mature playing and technique was evident throughout the piece. Senior violinist Kevin Cheng of the Langley Philharmonic Orchestra noted, “Our program’s future is in good hands -- the musicianship of the Cooper Symphonic was impressive.”

CAPPING OFF A NIGHT of great music, the Langley Philharmonic Orchestra delivered two Hungarian pieces noted for both their difficulty and rarity. Dohnanyi’s “Serenade Op. 10” was well received for its exciting contrasts between slow, melodic passages and virtuosic, fast sections. This was followed by “Divertimento No. 2” by Leo Weiner. A musical gem, this work is obscure even amongst professional classical musicians. However, members of the Langley Philharmonic Orchestra enjoyed playing this charming yet powerful work. Senior cellist Robbie Hamilton remarked, “This piece’s moving melodies and rich orchestration makes me think it should be performed more often.” Another aspect of this piece is its particularly demanding music for the viola section. Senior violinist Daniel Lee of the Langley Philharmonic said, “That section had a great performance tonight; you can tell a lot of practice went into learning their music.”

With less than three weeks remaining until the District XII Orchestra Assessments, both the Langley and Cooper Orchestras will continue to polish these pieces until they are ready to be performed for a panel of professional judges. Notably, the Langley Philharmonic Orchestra will attempt to win “Superior” ratings for the eleventh year in a row, a feat that has never been accomplished in the state of Virginia by a high school orchestra. Afterwards, the Langley Orchestra will travel to Hungary as part of their music trip to Europe in April, and have the opportunity to play some of these pieces in the same country where they were composed over a century ago.