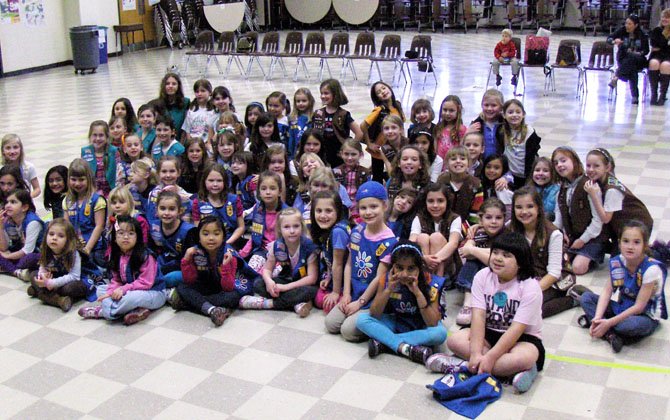 All seven Girl Scout and Brownie troops from Virginia Run Elementary gather for a group photo on the 100th anniversary of Girl Scouting.

Last Monday, March 12, was the 100th anniversary of Girl Scouting, and that afternoon, seven troops that meet at Virginia Run Elementary gathered to celebrate the centennial together.

Some of the Scouts talked about what life was like 100 years ago, and others showed pictures of the 1912 Olympics, plus the styles of cars and clothing from that time period. Then others re-enacted the story of how Juliette “Daisy” Gordon Low phoned her cousin, March 12, 1912, and told her she wanted to start Girl Scouts.

Low, of Savannah, Ga., wanted to create an organization that would teach girls to be competent, courageous and strong, as well as to follow their dreams and become good leaders. She also wanted to inspire all girls to make their dreams become realities.

“At the first meeting, 18 girls came,” said Brownie Troop 1587’s leader, Shannon Marshall. “Today, 3.7 million girls are in Girl Scout troops around the world. And since it began, Girl Scouting has touched about 50 million girls.”

Virginia Run fourth-grader Savannah Jeffries gave a short biography of Low that she’d done for a school project. Then several of the Girl Scouts said their own dreams aloud, sharing them with the others.

The theme of the event was Girls’ Dreams, and the girls said what they wanted to do when they grew up. The occupations included marine biologist, high-school teacher, veterinarian, lawyer, airplane pilot, doctor, chef, animal rescuer and Girl Scout troop leader. The girls also wanted to “cure celiac disease, help children, help people with sickle-cell anemia, work on curing cancer, help with surgery” and “work on a cure for Lou Gehrig’s disease.”

“Can your dreams come true?” Marshall asked them. “Yes,” they replied.

“With what?” she asked. “Hard work and practice,” they answered.

Next, each Scout wrote her dream on a piece of paper and attached it to the string of a helium balloon. Then they went outside, formed a circle, held hands and released the balloon into the air. They’d initially planned to launch 70 balloons but, out of concern for the environment, they just released one large, biodegradable balloon.

Afterward, they enjoyed cupcakes, and a few girls told why they enjoyed being involved in the Girl Scouts. Claire Marshall, 8, a Brownie in Troop 1587, said, “I like the name ‘Brownie’ and I like how we do crafts and jobs like stacking chairs and passing out snacks. It was really fun today because I read about Woodrow Wilson, who was president of the United States in March 1912.”

Also from that troop, second-grader Samantha Robinson, 8, said, “I like having all my friends in my troop and having a good time with them. I liked when we made blankets for people at the shelter and Christmas ornaments for people in the hospital. And it was nice to honor and talk about Juliette Low.”

Catie Zimmerman, 9, a fourth-grader in Troop 1502, said she likes being a Girl Scout because she gets to do fun things with her friends such as earning patches, playing outdoors and selling cookies. “It’s important to remember Juliette Low because she started Girl Scouts,” said Cate. “I enjoyed today’s celebration because I got to learn about her.”

A Brownie in Troop 3675, 8-year-old Sarah Schettini said she enjoys being with other girls and having a great time. “I also like painting; we’re trying to earn our painting patch,” she said. “And sometimes, we just go outside and have fun. I liked today because we could be a giant group, and it’s good to have a celebration for the 100th birthday of Girl Scouting because it’s a special occasion.”