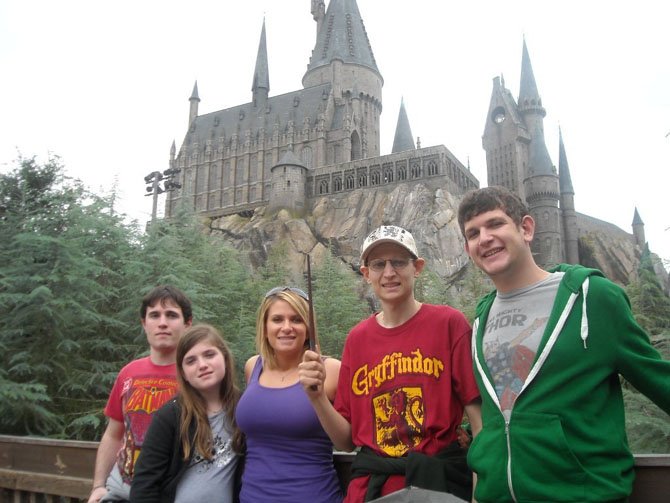 (From left) are Mac, Shea, Sam, Ryan and Liam Dillon, in November 2011, when their family visited The Wizarding World of Harry Potter at Universal Studios in Orlando. Photo Contributed by Hallie Dillon

Burke — Life stacked the deck against Ryan Dillon. He was autistic and had bone cancer and just lived to age 22.

Yet because of his family and friends, he had a full and happy life. And he, in turn, enriched theirs with his presence. So when he died March 8, it wasn’t the end, because he will always live on in their hearts.

A happy Ryan Dillon enjoys Butterbeer at The Wizarding World of Harry Potter, just like the Harry Potter characters did.

"There were over 500 people at his service – which wasn’t a funeral, but a celebration of his life," said his father, Don Dillon. And, added Ryan’s mother, Hallie Dillon, "That’s a true testament to Ryan and the special person he was."

Ryan was one of five children – three boys and two girls – of this Burke Centre family. Robinson grad Mac now attends the Pulley Career Center, for special-needs children, at West Potomac High; Liam is a Robinson senior; Samantha is grown and works for a government contractor; and Shea is a sixth-grader at Fairview Elementary.

Mom Hallie is an assistant principal at Poplar Tree Elementary. Dad Don formerly taught P.E. at both Fairview and Clifton elementaries and is now an adapted-P.E. teacher for special-ed students in FCPS’s Cluster VIII.

Although autistic, Ryan was high-functioning, expressed himself well and loved people. He was first diagnosed with osteosarcoma in 2003 at age 13. He had chemotherapy for a year and several surgeries to repair his left leg – the tibia was removed and replaced with a titanium rod. But Ryan dealt with it well and understood treatment was necessary.

He continued being treated and undergoing surgeries through 2006. He started healing and, in 2008, graduated from Robinson. He then took job-training classes there, learned office procedures at Westfield High and played baseball and basketball on Special Olympics teams.

"The oncologists told us he pretty much had this beat," said Don Dillon. "Ryan was doing great and was only going back once a year for follow-ups."

Then in March 2009, doctors discovered the cancer had spread to both lungs. More chemo and surgery followed, preventing Ryan from further participation in contact sports. In January 2010, he was in remission – until June 2011, when doctors noticed a tumor had returned to his right lung.

"Surgery was scheduled for July, but the doctors could only remove 50 percent of it because part was too close to the esophagus and diaphragm and they didn’t want to risk any damage," said Hallie Dillon. "Radiation wasn’t an option because of its location, and the chemo dosage he’d need would have been too strong for his body to tolerate."

DOCTORS DETERMINED a lower dosage Ryan could take but, said his father, "At that point, the clock was ticking. We started doing all we could to prolong his life and keep him comfortable. He couldn’t go to school, but could go to movies with friends and dinners out with the family."

Ryan could also travel, so he and his family visited relatives at the beach in New Jersey. And because he was such a big Harry Potter fan, in November 2011, his parents took him to Universal Studios in Florida to see the Wizarding World of Harry Potter.

Ryan Dillon in December 2011 at a holiday party.

Still, said Don Dillon, "His body was starting to shut down and we knew it was time. In September, they’d only given him two months to live; and in October, we told his brothers and sisters that eventually the cancer would take his life. But Ryan didn’t give up; he kept fighting ’til the end."

"You don’t ever come to grips with it," said his mother. "You just hold onto your faith and continue to have hope. It was important for us to keep positive for Ryan’s benefit and peace of mind. I didn’t want it to be frightening for him. My father passed away, as did my grandparents and uncles, so Ryan always knew there were angels looking out for him and for all of us."

Describing Ryan as kind, gentle and happy, his father said, "He was always smiling and always had a little joke or story to share about his family. Ryan didn’t have a want or need that wasn’t met by the community; people visited him, gave him hockey, baseball and football tickets and brought meals to the house."

Dillon said his son’s death still hasn’t sunken in. "It doesn’t feel final, yet, that he’s not home with us," he said. "But we have no regrets. We know we tried everything we could, and we know he had a happy life. We feel fortunate to have had the time we did with him. There are so many things he taught us, especially the importance of family. You have to love and take care of each other because, one day, you may not be here."

RYAN’S MOTHER said he taught her to never lose hope. "You live life to its fullest and find the positive in everything," she said. "Even though Ryan’s gone, we know he’s cancer-free and no longer in pain. So that’s got to be better for him – although it’s not better for us. And he’ll always live on in our hearts and in our thoughts."

"When we look around, we see things that remind us of him, and that’s OK," she continued. "The kids need to see us grieve because that gives them permission to grieve, too, show their feelings and feel good about talking about Ryan. And if it makes us cry or smile, that’s OK."