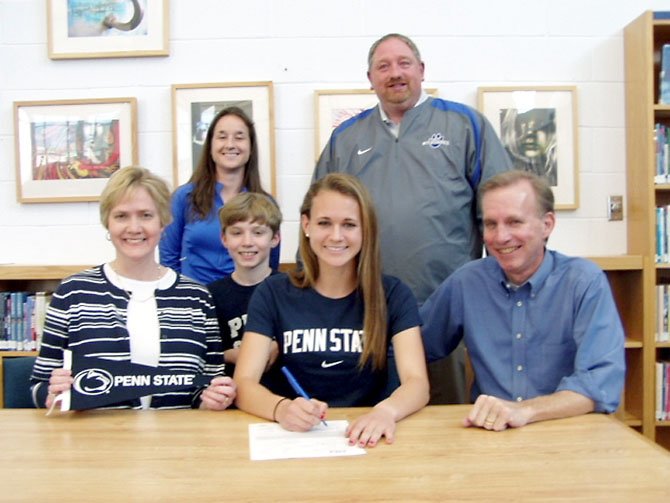 Underwood has run varsity track and cross country for West Potomac since her freshmen year, lettering and earning all-district honors for each season and being named team MVP seven times. In cross-country, Underwood was named to the all-district team all four years and earned all-region honors three times. She also served as a team captain for the 2010 and 2011 seasons, leading the Lady Wolverines to back-to-back Patriot District titles, as well as the 2011 Northern Region title.

On the track, Underwood has continued to excel and has been a captain her junior and senior years. In addition to her 17 all-district honors and 13 all-region honors, Underwood set a new Patriot District record in the 1000 meters en route to winning the title this year. She has also won three consecutive Northern Region titles in the 1000 and last year anchored the girls’ 4x800-meter relay team to a state championship. In addition, Underwood has been named all-state 11 times in track and is the West Potomac school record holder in the 800, 1000 and 1600.

Underwood shines on and off the track. She is a member of the National and Spanish Honor Societies, has been a Girl Scout for the past 12 years, and has been awarded numerous civic awards. She has a GPA of 4.27 and was recently named West Potomac's Female Scholar Athlete for the 2012 winter season.

McHugh is a versatile athlete and a first-team all-district, first-team all-region and honorable mention AAA all-state softball player. She played travel ball for the Shamrocks and Vienna Stars Gold. Tennessee Tech head coach Tory Acheson said in a press release: "Dani is a very strong student athlete who will make her mark on the field and in the classroom. She has played for several very strong East Coast teams over the past few years and her experience with those programs have her well prepared to compete for a spot next year."