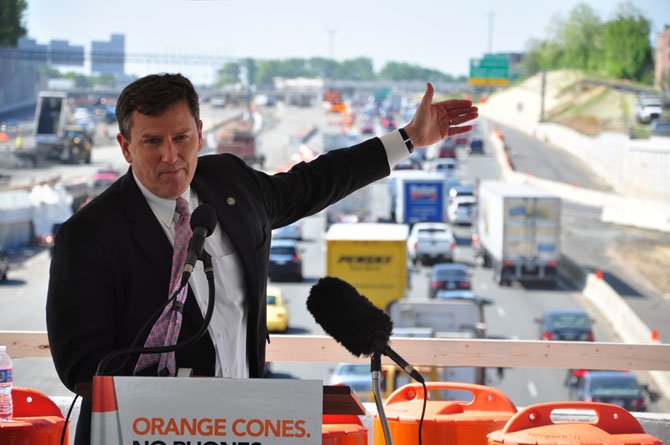 McLean — Local officials gathered at the Westpark Drive ramp over the Beltway Wednesday, April 25 to recognize police officers for their efforts combating distracted driving and to share some facts collected by their recent survey. The "Orange Cones, No Phones" initiative is a joint effort between Transurban-Fluor (the company building the 495 Express lanes) and AAA Mid-Atlantic.

"It’s time to put attention back in the driver’s seat," said Deborah Hersman, chair of the National Transportation Safety Board. "Last December we called for all states to ban talking or texting while you’re behind the wheel, except in emergency situations. We didn’t come to this recommendation lightly, our work on distracted driving started over a decade ago." 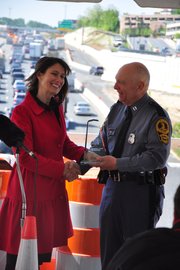 Lon Anderson, managing director of Government and Public Affairs for AAA Mid-Atlantic referred to a survey recently conducted of Beltway drivers, and was a little disturbed by the numbers.

"Two-thirds [of Beltway drivers] indicate they have recently seen or heard news about distracted driving. Yet just half of Beltway drivers indicate that they still use cell phones or talk or text while driving," he said. "They hear it, but they don’t heed it."

Also part of the campaign was a survey of 402 Northern Virginia law enforcement officials. According to the survey, 32 percent said they thought texting is the most dangerous driving behavior when in a work zone. The officers also estimated that more than 40 percent of drivers in a work zone are using a cellular phone.

BASED ON THEIR EXPERIENCES, 78 percent believed accidents in construction zones are increasing.

"We have used an existing county ordinance, ‘failure to pay full time and attention,’ to take enforcement action against drivers who continue to display risky driving behavior," she said. "Using this code has been an innovative approach to enforcement, as we have latched onto laws to deter cell phone use or texting while driving."

Culin said in the past the ordinance was used in accident investigations.

"Now the code is used when an officer observes a vehicle being operated in a manner in which it is obvious that the driver is doing something else than concentrating on driving," she said. "This may cause swerving, inappropriate braking, driving too fast or too slow, sitting still at a green light, but not necessarily a crash. We hope we’re stopping those drivers before that happens."

Virginia Secretary of Transportation Sean Connaughton says he is reminded of the hazards of distracted driving when he passes by the VDOT Workers’ Memorial, honoring the lives of those lost on Virginia’s roadways while on the job.

"We have families come there, families who have fathers, mothers, brothers, sisters who have been killed, some 10 or 20 years earlier. That’s when it really hits you," he said. "People have lost their lives out there in work zones and it’s not just people who are killed, it impacts families for generations."

Connaughton said he believed a culture change is needed to enforce the dangers of distracted driving to a new generation, just like his parents’ generation needed to adapt to seatbelt use.

"When I was young, my parents refused to buckle up. But then they started reaching out to young people, getting them at the earliest age to understand the importance of buckling up," he said.

MORE INFORMATION on Orange Cones, No Phones can be found at www.orangeconesnophones.com.