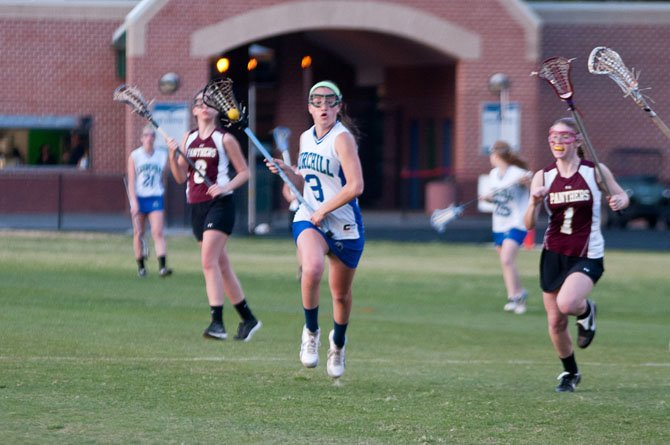 Maddy Flax and the Churchill girls’ lacrosse team enter the postseason as the 4A/3A West Region’s No. 2 seed. Photograph by Harvey Levine

With leading scorer Mairin Hall sidelined due to illness, the Churchill girls’ lacrosse team closed the regular season with a 17-7 victory against Watkins Mill on May 7 in Montgomery Village. While the Bulldogs still had more than enough to get past the Wolverines, Churchill wasn’t so fortunate against Quince Orchard three days earlier.

With nine players — including Hall — sidelined with the flu or other ailments, Churchill suffered a 12-10 loss to the Cougars, only Churchill’s second loss to a Montgomery County opponent since 2010. While the Bulldogs finished the regular season with a 10-2 record and most of their players are expected back for the postseason, the last week has shown Churchill’s potential path to a region championship might be bumpier than in past years.

"The only people that can beat us are ourselves."

In 2010 and 2011, the Bulldogs entered the postseason as the top seed in the 4A/3A West Region and went on to win the region crown in each season. This year, Churchill is the No. 2 seed behind Sherwood. The teams did not meet in the regular season.

"I think we’ve had a solid season so far — definitely very solid," senior Maddy Flax said after Churchill defeated Watkins Mill on Monday. "The last two weeks or so have been rough. We’ve had a lot of sickness, a lot of bugs going around, so it’s kind of stalled everything. But this was a turning point for us and our little slump. We’re going to turn it around and come in really strong for playoffs. …

"[Losing to Quince Orchard was] definitely a wakeup call. You kind of live in this little reality where you’re winning all your games and you’re like, ‘Wow, what just happened?’ But it’s important for us to use it as a lesson and go from there.’"

"We can’t just be good, we have to be great," head coach Christen Gjeldum said. "That will take us through the playoffs. If we settle for good and don’t come out like ourselves, then we’re in trouble. I know we can beat any team, but we have to come out wanting it. …

"The only people that can beat us are ourselves."