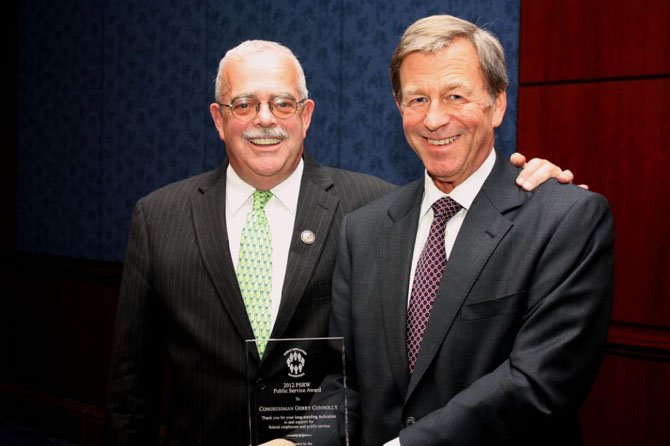 Congressman Gerry Connolly is presented with the 2012 Public Service Award by William Bransford, vice chair of the Public Employees Roundtable, at a ceremony in the U.S. Capitol. Photo Contributed

U.S. Rep/ Gerry Connolly (D-11) was honored for his support of the federal workforce and his efforts to promote good government at a ceremony Wednesday evening. Connolly received the 2012 Public Service Award from the Public Employees Roundtable, a non-partisan coalition of 30 organizations, and the Coalition for Effective Change.

Connolly was the first recipient of this new award to recognize national leaders who support the betterment of the federal workforce and improving government. The award will be given annually as part of Public Service Recognition Week.

"Many of our federal employees are our nation’s unsung heroes, though they are rarely recognized as such," Connolly said at the award ceremony. "They ensure that the food we eat, the prescription drugs we take, the air we breathe, and the water we drink is safe. They make sure that Social Security checks arrive on time, protect us from terrorist and foreign adversaries, keep our air travel safe, and conduct thousands of other important functions that directly impact the quality of our lives on a daily basis."

In choosing Connolly to receive the award, the PER selection committee cited his vocal and tireless championing of federal employees, legislation he sponsored aimed at bettering the federal workforce, and his willingness to stand up in Congress for federal workers against repeated assaults on their pay, their pensions, and their integrity.