The Fun Run Draws All Ages 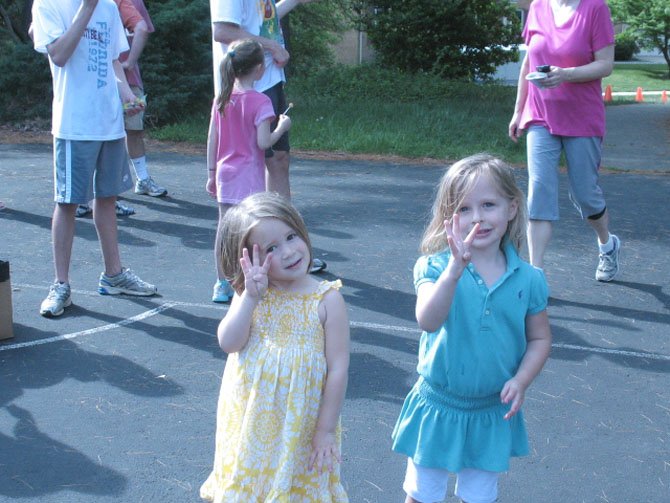 Two 3-year-olds, Emmy Brilliant and Grace Riihimaki. hold up four fingers when asked how many laps each of them did. Photo by Sangeeta Kumar

Olivia Marcantonio, a 13-year-old student at Joyce Kilmer Middle School and alumni of Colvin Run Elementary and Shan Shan--both volunteer at the rubber band stand at the Fun Run.

Kathryn K, a 10-year-old at Colvin Run writes her family’s name on the Healing Table after completing one lap. Her mother, who wished to be identified just as Mary K. said they hadn’t decided on a charity yet but would likely give to The American Heritage Girls—a faith-based charity.

Just up the street from 1400 Trap Road, neighbors and tiny tots were up and about at 8:30 a.m. on Saturday, May 5. Some were walking; others were running.

A young teenage girl and a parent stood at the entrance of a trail leading to a parkland. They ranged in age from 3-year olds to middle-aged men and women. They were all participating in the Sixth Annual Colvin Run Elementary School Fun Run.

Mary Wells, who was accompanied by her two children and her dog, had completed seven laps when she paused for a photograph. Given that the fun run has been dubbed as the "fund run" in the past, most participants were walking or running for a cause. "We haven’t picked a charity yet," said Mary as she added that maybe the Fun Run organizers have a charity picked out for them.

Mary K and her daughter Katherine, who attends Colvin Run Elementary had just completed a lap each and were planning to give the funds they raised to an adoption charity or to the American Heritage Girls.

Emmy Brilliant and Grace Riihimaki had to be beckoned away from the refreshment stand by their parents to answer the question of the day: "So how many laps did you do?" A parent asked. Both girls flashed four fingers to indicate four laps a piece. The rubber band bucket was getting depleted of rubber bands at a fast rate. The bands were in a bucket that was attended to by a Joyce Kilmer student, Olivia Marcantonio, who once attended Colvin Run Elementary. She was accompanied by a parent who gave her name as Shan Shan and kept a close tally of the rubber bands leaving the bucket.

The Sixth Annual Colvin Run Elementary School Fun Run was marketed as a "a super event that provides exercise to participants and financial support to charitable organizations," Matt Kingsley said via email.