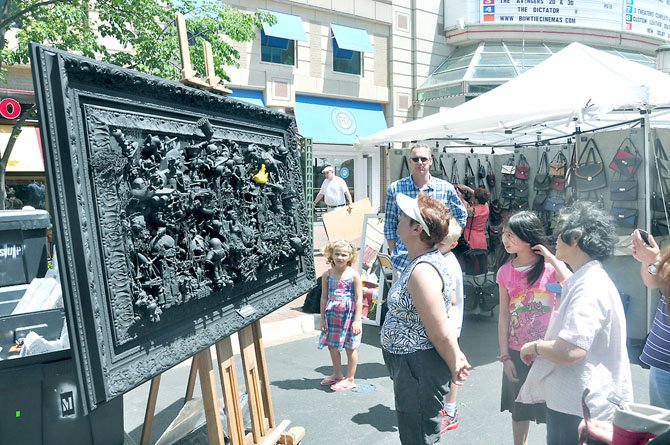 Guests at the Northern Virginia Fine Arts Festival examine a piece by mixed media 3D artist David Burton, made up of various action figures and toys. Photo by Alex McVeigh.

Reston — More than 20 years ago, artist Dana Ann Scheurer was part of the very first Northern Virginia Fine Arts Festival. The primarily watercolor artist is still part of the festival, which celebrated its 21st year at Reston Town Center. 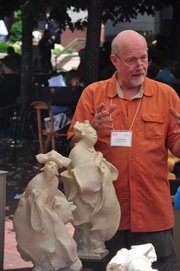 "I remember when it was 25-50 booths, just a really small event, and it’s been amazing to watch it grow," she said. "It’s been so well-run and everyone supports it 100 percent, I’ve been very honored to be a continued part of it. I‘ve done a lot of Reston-related pieces, and the community has really responded. "

The once small event is now hundreds of booths, taking up multiple blocks of Reston Town Center and featuring 200 artists who work in almost every medium possible. Thousands came to the festival last weekend to browse artists both local and from around the country.

One such artist from Florida, James Michael Nemnich, had his painting "The Dreamer" selected to appear on promotional materials for the event.

"I was honored to have it selected, it was one of four I submitted for the festival," he said. "I’ve been coming here for the past few years, and it’s a great crowd. I’ve had some repeat customers that have come back year after year to see what’s new."

The Greater Reston Arts Center produced the festival, and made some changes this year. 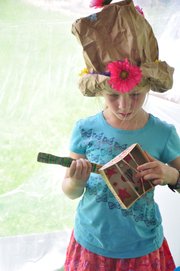 Lili Malatinszky, 8, strums the "guitar" she made at the children’s art tent at the Northern Virginia Fine Arts Festival Sunday, May 20.

"We branched out and started our events Friday night, which was exciting, we got a fun collection of people, the Friday night restaurant crowd and the people leaving their offices," said Damian Sinclair, executive director of GRACE. "This is one of our three main events. We have the gallery, our educational efforts and this festival, and our goal here is to bring the best we can to this community."

"This event is probably about 90 percent volunteer-run," he said. "It’s astonishing what they’re able to accomplish and the dedication they show."

A highlight of the event each year, and one of its major draws, is the children’s art tent. This year, the theme was music, and children could make tambourines out of paper plates, guitars out of boxes and rubber bands and more.

"We wanted to appeal to as wide of an age range as possible, and just create a space where the kids come in and feel comfortable being creative," said Jeanne Loveland, co-chair of the art tent and education director at GRACE. "We also had our signature paper bag hats, which everyone seems to love and our children’s art mural. That’s where they can come, grab some paint and do as much or as little as they want. We like to keep it open-ended."