‘Happily Ever After’ at Workhouse
Votes

‘Happily Ever After’ at Workhouse 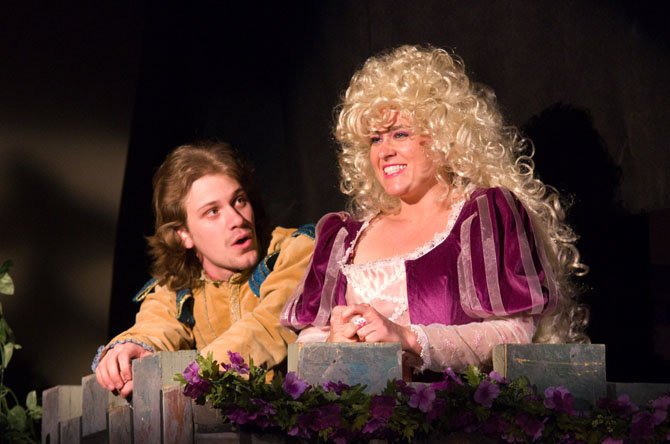 From left Eben Kuhns and Ashley San in the Workhouse production of the magical fairy tale "Rapunzel." Photo Courtesy of Melanie Beus

Full of energy with plenty of foolishness to sweeten the life lessons hidden in plain sight, the magical fairy tale "Rapunzel" is given an appealing live production rendition at the Workhouse Studio 3 for Young Audiences.

Careen Hearne, director of the production, set out to produce a "Rapunzul" with some of its Grimm's Fairy Tale darkness softened a tad for younger audiences. The Workhouse version is the same "Rapunzel" we know, but "with much humor and also much heart." She has accomplished her goal and given younger audiences three dimensional characters who also interact with the audience throughout the production.

Hearne has also made certain that the various characters beyond just Rapunzel receive their time in the spotlight. Whether the Witch, the Prince, Bakers or Monsters, each have time to shine in their own ways and to be much more than a mere cartoon character.

In this telling, the Witch has a deep sorrow in her life that leaves her searching for a way to give someone all the love she has inside her. The husband and wife Bakers do some naughty things and there must be consequences for their actions. A two-headed, three-legged monster is, well, quite cuddly and adorable and not such a scary beast at all. The Prince and his Squire show fortitude and work hard to rescue Rapunzel from her lonely, high tower.

The technical aspects of the production are charming and well accomplished. Fake stone walls, a lit working fountain and bright, colorful flowers greet the audience. There is also original music by Alex Aucoin to take the audience through scene changes and underpins the actions and text. The costumes are sharp; delightfully vivid, conveying the essence of each character.

Not to be missed, the well-remembered phrase "Rapunzel, Rapunzel, let down your lovely hair" even leads to some well accomplished, unexpected physical activity by any number of characters.

The actors all deserve mention. They include Kindra Cook, a Witch with a flair for the dramatic movement of her arms and great flashing eyes. Ashley San is innocent Rapunzel, the young woman who grows "bored and sick to death of happiness." Jesse Baskin and Amanda Spellman are loudly comical baker and his wife. Anna Jackson and Chris Galindo combine to create a sweetly cute monster. Eben Kuhns is the resilient heartthrob Prince and Jason Krage his hard-working Squire.