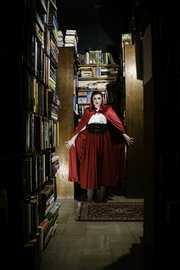 Nora Palka as "Little Red Ridinghood" in NextStop Theater Company's "Into the Woods." 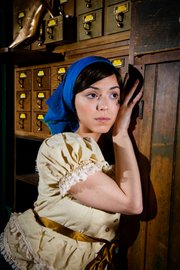 Brittany Martz as "Cinderella" in NextStop Theatre Company's "Into the Woods." 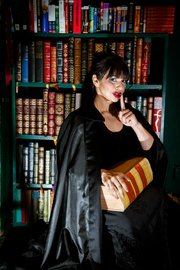 Priscilla Cuellar as the "Witch" in NextStop Theatre Company's "Into the Woods."

There was a cheerful bustle taking place as NextStop Theatre company members were rehearsing Stephen Sondheim's striking musical "Into the Woods." Smooth voices were warming up as the keyboard began to bring musical life into the rehearsal hall.

"Into the Woods" is a big 17-member cast production directed by Evan Hoffman, with a 10-piece orchestra and a score of nearly 30 numbers, under the musical direction of Elisa Rosman. The show continues NextStop's poised move into its first year as Northern Virginia's newest professional theater company. The cast includes top notch musical theater talent who have performed at Signature, Ford's, Keegan, Toby's and many others.

"Into the Woods" has music and lyric by Stephen Sondheim, with book by James Lapine. It intertwines familiar Brothers Grimm fairy tales such as "Little Red Riding Hood," "Cinderella," "Rapunzel" and "Jack (the giant killer)," with a new tale of a childless baker and his wife. It is constructed to show what happens after the usual, “happily ever after” fairy tale endings.

"We set the bar high for this season and ourselves when we transitioned to become NextStop and audiences have embraced us," said Hoffman. "We are so very grateful to our audience for their support. Without them this would not have been possible."

Asked about "Into the Woods," Hoffman said that the company will be taking its own "fresh approach" to the iconic, award-winning musical." That includes "not glossing over or exploring some of the hard-hearted aspects" that the fairy-tale characters in the show present as they pursue their "I wish" dreams.

When asked for an example, Hoffman mentioned Jack's Mother who sings lyrics, "We have to leave, I don't care how, do what you must to survive." In the Brothers Grimm Fairy Tales, characters were often "fighting for their lives, willing to do what it takes to survive."

The show's set will be a two-story library setting where the fairy tale characters will come to life as if magically from books being read.

The key role of the witch is played by musical theater veteran Priscilla Cuellar. She views the witch not as just an unpleasant evil-doer. "The witch has some softness in her that can be seen when you look in the way she poses, moves and in certain specific lyrics" such as "Our Little World."

The NBC TODAY Show co-host, Kathie Lee Gifford, will be the voice of the Giant’s Wife.