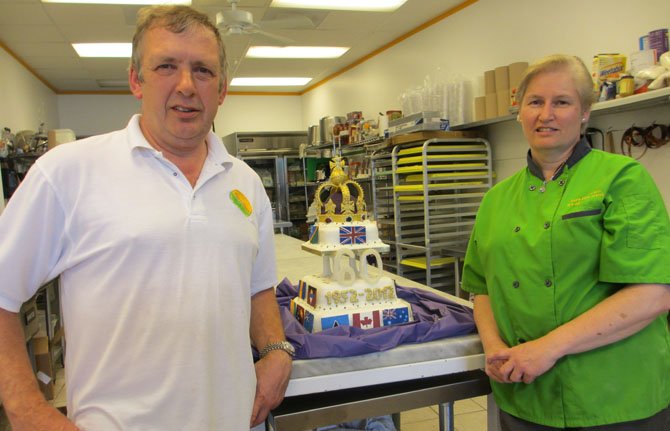 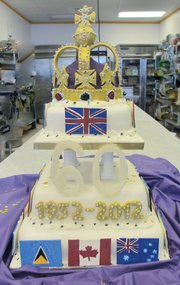 The Queen Elizabeth II Diamond Jubilee fruitcake marks the celebration of the Queen’s ascension to the throne in 1952. The cake, adorned with a replica fondant coronation crown and hand-crafted flags representing the monarch’s 16 realms will be cut into serving pieces and sold on June 2.

It took a four-month period, two pounds each of butter, flour and sugar, eight pounds of mixed dried fruit, home-made marzipan and fondant, brandy and artistic finesse to create the spectacular Queen Elizabeth II’s Diamond Jubilee cake at The Pure Pasty Co. on Church Street. The fruitcake, made in the traditional British manner, weighs in at approximately 30 pounds, 15 of which are cake, six pounds marzipan, six fondant, and two pounds worth of solid-fondant coronation crown coated with sugar paste.

If you think that’s hard to describe, you ought to try making it.

That’s just what Pure Pasty chef Nicola Willis-Jones and shop colleagues did. The ingredients alone cost $100 for the 100-serving cake.

THE TWO-TIERED fruitcake, laden with dried fruit and soaked in brandy for four months, was designed and made in honor of Queen Elizabeth II’s Diamond Jubilee, the 60th anniversary of her ascension to the throne. There are layers of marzipan and fondant to gild the lilly.

"We’re bringing the Jubilee celebration to the U.S.," said The Pure Pasty Co. owner Mike Burgess, whose shop made a wedding cake in honor of the wedding of Prince William and Kate Middleton.

Willis-Jones estimates the cake took her and two fellow chefs about 16 hours to make from start to finish. Willis-Jones concentrated on the fruitcake and its design, and the sugar 60 was made by Jen Starchak and the fondant by Jessica Parsons, all of whom have cake decorating experience.

The official UK bank holiday weekend celebrating the ascension of Elizabeth to the throne in 1952 is celebrated from June 2 through June 5 throughout the United Kingdom. Queen Elizabeth II’s coronation was in the following year.

June 2, in London, 1,000 barges will float down the Thames River, with Queen Elizabeth II and the Royal Family heading the procession. On that same date, a six-inch fruitcake will be raffled off at The Pure Pasty Co.

Fruitcake, explained Willis-Jones and Burgess, is the traditional cake to serve at festive events, from weddings, birthdays and anniversaries to christenings. The Pure Pasty Co. Queen Elizabeth II Diamond Jubilee cake is on display until June 2 when the cake will be cut into serving pieces and sold to celebrate the momentous occasion.

"If they come here to look at the cake, they’ll learn something they didn’t know," said Willis-Jones. "What they don’t know is that the flags on the cake represent the 16 realms of which Queen Elizabeth II is the monarch."

Willis-Jones trained as a chef as a member of the Royal Air Force. "I can honestly say I cooked for the Queen and other members of the royal family," Willis-Jones said. "Along with other chefs, of course." She spent time in Australia learning pastry-making techniques before moving here 6-1/2 years ago. She joined fellow Brit Burgess when the shop opened. A year ago, she moved up the chef ranks, teaming with Burgess and chef Jessica Parsons to create the rich, authentic Cornish pasties of The Pure Pasty Co.

Besides the commemorative fruitcake, The Pure Pasty Co. is making "coronation chicken" to mark the Diamond Jubilee. The cold curried chicken salad, in vol au vent pastry shells, was concocted in 1953 to serve at the Queen’s coronation.

The Pure Pasty Co., a go-to shop for British expatriates and Anglophiles, boasts of buying organic ingredients. When asked if preservatives, artificial flavoring or coloring, any kind of "junk," was used in the fruitcake, Willis-Jones appeared to be appalled by the suggestion. "We don’t cook with junk in here," she said. They do use sugar, though.

TO SEE the Queen Elizabeth II Diamond Jubilee cake, stop by The Pure Pasty Co., 128C Church Street, in the alleyway between Maple Avenue and Church Street. For information on the shop, go to www.purepasty.com or call 703-255-7147. Remember, the cake will be sliced and sold on June 2.