2012 People of the Year Honored
Votes

2012 People of the Year Honored 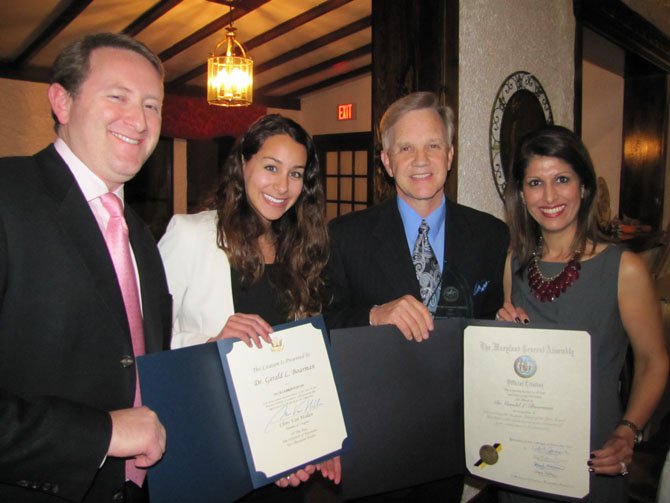 Dr. Gerald Boarman, fifth head of school at Bullis, was honored as Potomac's Business Person of the Year. Bullis is one of Potomac's largest employers, and Boarman was praised for expanding its valuable role in the community. Chamber President Adam Greenburg, Lindsay Comacho representing U.S. Rep. Chris Van Hollen, and Monika Samtani of Channel 9 join to congratulate Boarman.

Potomac — More than 80 people gathered at Normandie Farm restaurant in Potomac on Thursday, Nov. 15 to honor the 2012 People of the Year, as named by the Potomac Chamber of Commerce.

Lindsey Thaker, of Holton-Arms School, and Jonathan “JD” Dyer, of Bullis School, are the 2012 Youth of the Year.

More than 80 people gathered at Normandie Farm restaurant in Potomac on Thursday, Nov. 15 to honor the 2012 People of the Year, as named by the Potomac Chamber of Commerce.

Thaker created a video about the importance of maintaining relationships with grandparents with dementia and Alzheimer's. Thaker has been in the Potomac Girl Scout troop 1799 since first grade, is a Chinese speaker since kindergarten at Potomac Elementary, and helped start a comedy club at Holton-Arms.

J.D. Dyer is an Advanced Placement and honors student at Bullis, a member of the National Honor Society, active participant in student government, and a leading member of the Bullis varsity football team, according to Andrew C. Delinsky, Upper School Principal of Bullis School.

“Scholar, athlete, community service leader, and one of the most thoughtful men I have ever taught,” said Andrew Delinsky, Upper School principal at Bullis in nominating JD. “Perhaps the most amazing aspect of JD is what he has overcome.” Dyer was in a coma for weeks after a serious car accident in middle school.

LOIS WILLIAMS, a Potomac resident of 46 years, is this year's Potomac Chamber of Commerce Citizen of the Year.

West Montgomery County Citizens Association honored Williams with a plaque in May for “extraordinary contribution to WMCCA and the Potomac community.”

Williams has worked with West Montgomery for 40 years and has served as the newsletter editor and board member. She was newsletter editor of her homeowners association and PTA and a girl scout leader as well. Williams brought 36 people along to celebrate, and introduced each one in accepting her award. She insisted each person stand and remain standing as she introduced the group.

The Chamber Businessperson of the Year is Dr. Gerald L. Boarman.

“Under the dynamic leadership of Dr. Gerald Boarman, who became fifth head of school in 2010, Bullis has expanded its valuable role in the community,” according to Tom Sullivan, Chairman of the Board of Trustees of the Bullis School. “Giving back to the community and to those less fortunate is a primary focus integrated into school life all year long.”