‘The Funniest Farce Ever Written’
Votes

‘The Funniest Farce Ever Written’ 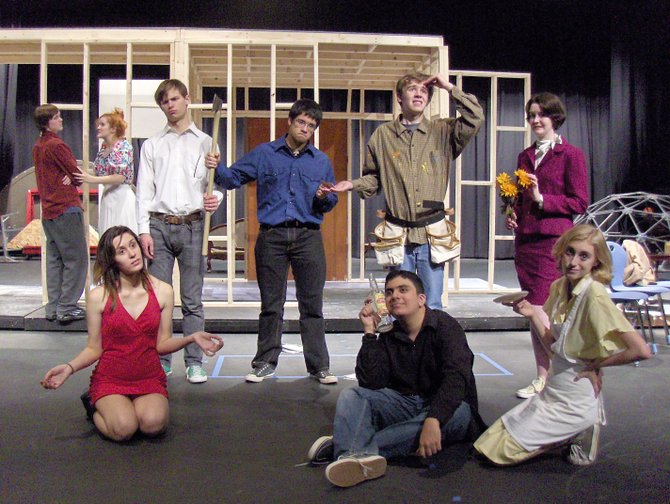 “It’s a play about people putting on a play, a British sex comedy called ‘Nothing On,’” said Director Wendy Knight. “There are problems between the actors, people don’t know their lines and each character has their own quirks that pretty much guarantee the play will be a complete failure. It’s considered the funniest farce ever written. There’s innuendo, wit, verbal humor and slapstick, so the show appeals to a broad range of comic taste.”

Senior Shakil Azizi portrays Selsdon, a 70-year-old actor. “He likes to drink a lot, so he doesn’t always remember stuff or come onstage when he’s supposed to,” said Azizi. “He’s really fun to play because I get more freedom in the choices I make to play this character.”

AS FOR THE AUDIENCE, he said, “It’ll be hard for them not to laugh. The jokes are original and there’s a lot of physical comedy, especially in the second half, that they’ll really enjoy.”

Playing Lloyd, the show’s director, is senior Nikolai Benabaye-Harild. “He’s frustrated about how things are going,” said Benabaye-Harild. “The evening before it opens, actors are still forgetting lines and don’t know their blocking. But he still tries to save the show. He’s also in a relationship with one of the actresses and the stage manager, at the same time, which also complicates things. He yells at the cast and, at times, can be a jerk.”

Benabaye-Harild enjoys his role because it’s different from his own personality and he likes playing English characters and using an accent. And, he added, “I really wanted this part because of all the craziness that goes on with the show he’s directing.”

He said the audience will appreciate the play’s humor, innuendos, physical comedy and “all the wild things that go on, over the course of the show.”

Junior Kelly Anderson plays Poppy, the stage manager. “She’s kind of mousey and intimidated by the actors—who are in charge of everything, instead of the other way around—which is why it’s a hot mess,” said Anderson. “And she’s also having an affair with the director.”

Anderson said Poppy worries about the show, takes her position seriously and wants to do a good job. “But the actors are letting their personal lives interfere with their acting,” she said. “On the surface, you can make her really boring and nerdy, so it’s fun to add some depth to her and make her a person.”

Anderson said anyone who’s ever been involved in theater—or known someone who has—can relate to this play. “These actors are ridiculous,” she said. “And the show’s so funny—always seconds away from mass chaos.”

Playing young actress Belinda is senior Isabelle Baucum. “She strives to be the most professional of all the actors in the show,” said Baucum. “She wants to be the glue that keeps the show together. Her niche is soothing people and helping them get over breakups. She tries to remain rational in the face of stress and has a heightened sense of self-righteousness.”

Baucum “absolutely loves” her role. “When I first saw the movie, Belinda was the one I was most interested in because her quirk wasn’t as obvious as the other actors’ quirks,” she said. “She thrives off stress to see how well she can deal with it and remain composed.”

“There’s something very true about the way every person acts with each other in this show,” said Baucum. “The beauty of ‘Noises Off’ is that, not only is it hysterical and ridiculous at times, but it keeps that farce in line with reality. And the audience will know people like them in real life. It’s a work-environment nightmare that most people will be able to relate to; and being based in reality is what makes it funny.”

THE STUDENTS have been rehearsing since September, and Knight says her actors are doing very well and are “right on point. We had really talented people audition, and they all have great instincts and comedic timing. They also like creating their characters and making caricatures of them.”

She’s also proud of the set, which will be massive. “It’s the interior of a two-story house, with six functioning doors able to slam, so the walls have to be sound,” said Knight. “There’s also a window that can be broken and climbed through – and the whole thing revolves 360 degrees.”

On top of that, she added, “The script is so much fun; each comic actor has so much to do. The audience should really enjoy this show.”