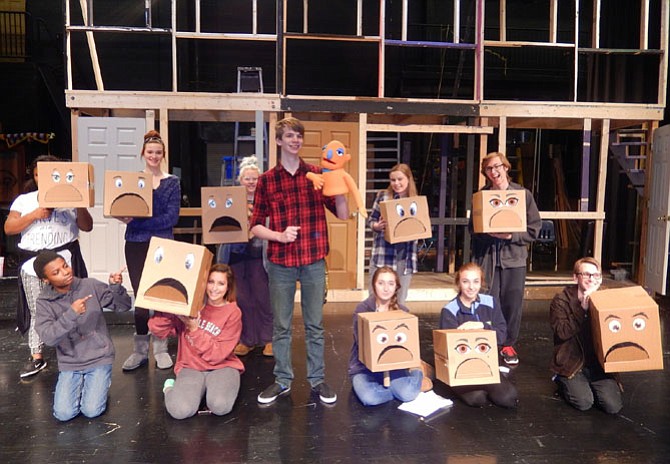 As the character Princeton, Wade Parker turns his moving boxes into puppets. Photo by Bonnie Hobbs. 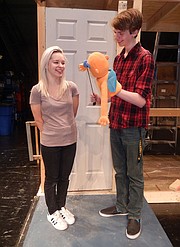 Westfield High’s upcoming musical comedy, “Avenue Q,” is about the residents of a fictional street in New York, their various struggles and how they work through them in humorous ways to have the best outcome possible. And while the use of puppets as characters may remind audiences of the classic TV show, “Sesame Street,” it’s a grownup, PG-13 version not for elementary-age children.

The cast and crew of 35 have been rehearsing since November, and Director Rachel Harrington says things are going great. “The show lends itself to being hilarious and high-energy, and it’s been really wonderful seeing the kids blossom into their characters,” she said. “It’s also exciting because the kids are making all the puppets, themselves.”

There are about a dozen puppets total, mostly representing the main characters. “They’re ‘Sesame Street’-style and size and are bright colors with fur and all kinds of quirky and wacky accessories,” said Harrington. “The actors are used to using their bodies as their instruments, so I’ve had to teach them to use the puppets, instead, as an extension of their characters.”

So, she said, “With this show, I’ve certainly served them up a challenge — and every, single one of them has risen to the occasion. I’m extremely impressed with the way they took on their roles and the initiative they’ve showed to make them their own.”

The set is comprised of the apartment buildings on Avenue Q. They’ll look old and rundown, but Harrington says the “bright and colorful aesthetic of the characters brings this environment to life.” Overall, she said, “People will enjoy the uniqueness of this show. It combines two, completely opposite, artistic conventions — serious topics and funny puppets — while telling a story of everyday life that we all can relate to.”

Senior Wade Parker portrays Princeton, and the story depicts his life after graduating college and moving to New York. He meets a girl, tries to find his purpose, makes new friends, breaks up with the girl and wants to get her back.

“He’s a naïve, fresh-faced adult who doesn’t know a lot about life,” said Parker. “He’s pretty carefree, but intent on finding himself. He has good intentions, but doesn’t always do the right thing. I like playing him because he’s a goofball and a funny character because of the things he says.”

Parker’s favorite song is “Everyone’s a Little Bit Racist,” which he sings with other cast members. “To me, it’s the show’s funniest song,” he said. “When I saw ‘Avenue Q’ off Broadway, it’s the one that stuck with me. It’s kind of portraying the ‘Sesame Street’ view of real life and takes a satiric approach to real problems.”

He said the audience will definitely enjoy this show’s story, comedy, singing and acting. And, he added, “People will also like the song, ‘It Sucks to be Me,’ because it’s so catchy.”

Playing Kate Monster is senior Kaili Fox. “Kate is a kindergarten teaching assistant who lives on Avenue Q,” said Fox. “She has a lot of hopes and dreams and wants to start a monster school. Monsters are considered a different race, and she wants them to have the same opportunities as everyone else. She never thought her dream was achievable, but she tries. Of all the characters in the show, she’s the purest one with the most heart and spirit.”

Fox loves this role because she’s previously played mainly small or ensemble parts, but this one is a lead. She also likes portraying Kate because “she’s funny, has good songs to sing and is noticeably different from all the other characters. My favorite song is my solo, ‘There’s a Fine, Fine Line.’ It shows Kate at one of her sadder points where she decides she doesn’t want to waste her time anymore with the hardships in her life.”

Fox said people will like “how relatable this show is about the difficulty of becoming an adult, even though it’s told in a childish, ‘Sesame Street’-type way. The audience will also really like the puppets because they’re cute and fun to look at.”

Classmate Nikolas Glover plays real-life actor, Gary Coleman — one of the few characters that’s not a puppet. “In this show, after he was famous and lost his money, he became a building superintendent on Avenue Q,” said Glover. “He’s funny, always happy and sassy.”

“I’m having a blast playing him,” continued Glover. “I love this character because he’s so much fun. And I feel Gary Coleman and I have similarities; we’re both pretty comical and have childlike essences.” Glover especially likes the number, “Schadenfreude,” which means being happy at the misfortunes of others. He and another character sing it together, and Glover says it’s funny and upbeat.

He says the audience will like “all the show’s distinctive characters with their individual personalities and quirks. They’ll also appreciate how real the music’s messages are about life, how to get through it and that you’re not alone.”

Portraying Nicky is senior Nathan Marshak. “He’s pretty much a slob and a foil to Rod, his roommate,” said Marshak. “We parody ‘Sesame Street’s’ Bert and Ernie; I’m Ernie, and Rod — played by Braeden Anderson — is Bert. They’re good friends who care about one another. Nicky is kind and a good guy, but he isn’t very independent, so he needs help from others on Avenue Q to basically get by in life.”

Marshak enjoys his role because he gets to speak in Ernie’s voice from the TV show. “His voice is familiar to people,” he said. “But this time, it’s in a new character who’s an adult, so I can have more fun with it. Being a puppeteer is also a new experience; there’s a limit to a puppet’s physicality. It’s challenging moving its mouth and arms while synchronizing the voice and motions perfectly — but it’s definitely fun.”

His favorite song is “If You Were Gay,” which he sings to Rod. “It’s to tell him, ‘Even if you were gay, we’d still be friends,’” said Marshak. “It helps portray their relationship in a fun and carefree way, while giving a realistic message of acceptance and showing that the bonds between friends can go really far.”

He said people will love seeing the puppets and, “Despite the play’s serious message, it’s presented in a really comedic way. The message is that life is challenging, but everyone’s going through the same things and you’ve just got to persevere.”