A magical time of year
Votes

A magical time of year

Magicians to entertain children with free show Dec. 5 while helping the Alexandria branch of the Salvation Army. 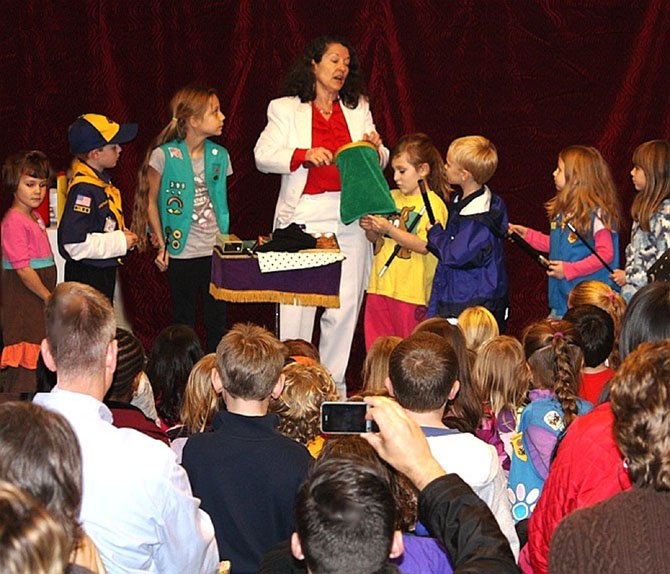 Laurie Curry had a group of children enthralled during her performance at last year's holiday magic show, featuring the International Brotherhood of Magicians Ring 50 club.

Alexandria — There's something special about the holiday season, between the sparkling lights, frosted windows, endless baked goodies and the wonder that anything is possible.

That same feeling of awe makes it the perfect time of year for a magic show, and that's precisely the sentiment that led Ring 50, the local chapter of the International Brotherhood of Magicians, to host a magic show for area children. 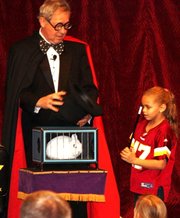 "We started this last year when we wanted to do something to give back to the community, not just hold a children's magic show," said Daniel Selnick, the club's president.

At the door, attendees are asked to bring a canned or non-perishable food donation, or a new children's toy, which will be given to the Salvation Army for their holiday outreach programs, Selnick said. The Salvation Army was the obvious beneficiary, as they work directly with families in the area who might not be able to share in the holiday festivities otherwise.

WITH MORE THAN 100 magicians in the group, Ring 50 decided to feature different magicians this year, and the interest was huge, Selnick said. Some are working magicians whose weekends are filled with children's birthday parties and other events, while others are hobbyists who don't get the opportunity to perform as often. Each will take the stage in the cafeteria at Bishop Ireton High School for a 15-minute performance, with another magician serving as emcee for the event keeping the kids entertained between sets.

This year's emcee is Arlington resident Arnold Fuoco, who said his job is to keep the children focused without losing their interest in what's going on.

"There were so many kids last year," Fuoco remembers. He worked the show last year as a videographer and was eager to help out again this year, in a larger capacity. 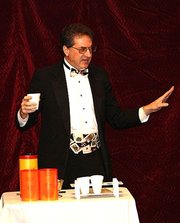 A magician known as Capt. Token displays his magical abilities during last year's holiday magic show hosted by Ring 50 of the International Brotherhood of Magicians.

He intends to do some "vanishes and productions" during his in-between-acts performances, making things disappear or appear out of seeming nothingness.

A magician for 20 years, Fuoco said he got his first magic set as a Christmas present when he was a little boy, and the fascination grew. But, like the other magicians also admitted, magic took a backseat to school, work and families, never fully disappearing from their interests.

That's a sentiment shared by this year's magicians as well.

Theo Rushin, one of this year's performers, said he got into magic as a child and returned to it at the urging of his wife in recent years. In Ring 50, he works with children who are interested in becoming magicians or just looking to learn a few tricks to impress their friends.

Performing for children is his favorite, because "children simply accept what you're doing as being magic," whereas older children or adults might spend more time trying to figure out how a particular trick works. 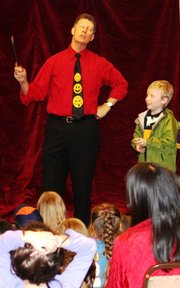 Lorenzo the Great called on a member of the audience to help him conjure his magical abilities during last year's holiday magic show, featuring members of the Ring 50 club of the International Brotherhood of Magicians.

As an added feature, Rushin, who lives in Gaithersburg, said he won't be speaking during his routine, but while he's silent, there will be a soundtrack to create a world into which the audience can watch the tricks unfold.

"I'll tell the story of a kid so excited for Christmas that he wakes up at night to see what he got," and tries to figure out his gifts by shaking or looking at boxes, he said. "Of course, that kid is me. I used to do that. When I was young, like any other kid, I wouldn't be able to sleep. It was more like taking a few little naps in a row, sleeping for half an hour, waking up and wondering if it was morning yet."

Magic is special for children, especially during the holidays, because it allows the audience to forget any troubles they might have for a little while. "To be able to keep the feeling of wonder and magic, especially at this time of year," is what inspired him to participate in this show.

Kevin McGuire, who performs as "The Amazing Kevin," served as the emcee last year and had such a good time, he couldn't resist taking on a bigger role this year.

He's incorporating the holiday theme into his set, using candy cane wands and a Santa Claus hat among other props.

Performing in front of children "is a euphoria. It's so energizing. That's what drives me to do the magic I do. Kids are so into it, they really believe this can happen," he said.

The centerpiece of his set is a coloring book. He warns against people thinking they've seen his particular trick before, despite it being a common one for children's magicians to use. His is different in a way that has to be seen to be appreciated, he said.

McGuire, the vice president of the club and a Stafford resident, said magic never gets old or stale for him.

"You can do a trick 100 times, and then there's that one time you do it and it's even better than it's been in the past," he said. "That makes it all even better."

Drew Owen, whose stage name is Professor Fizzwiffle, said he started putting together this character when his children became interested in the Harry Potter books.

"Professor Fizzwiffle is a goofy guy who has magical powers and doesn't always know how to control them," Owen said. "He keeps trying to salvage a trick that's going wrong, and the kids will help save the day."

He hinted that there will be a "special secret magician" that will appear during his performance, but in keeping with the Magician's Code, he couldn't divulge who that guest might be.

Owen said it's "important that magic looks good. If you get people involved in the story, they're more willing to believe in the magic."

The Falls Church resident, who is new to the club, said the club is optimistic they'll have a bigger and better show than last year, when nearly 100 children were in attendance.

"This is just magic and fun stuff, to make the kids laugh," he said.

He got his start in magic when he was a child and saw a magician on TV. "I remember thinking that if I had magical powers like that, I could use magic to wash the dishes and make my bed," like Mickey Mouse does, to great comedic trouble, in the Sorcerer's Apprentice from the classic film Fantasia. "My brother got a magic book for his birthday and I couldn't wait to get my hands on it because I figured it had the magic words in it."

He now has what was supposed to be his brother's book of tricks on a shelf in his house.

See the Show, Spread some Cheer

Ring 50 of the International Brotherhood of Magicians will be offering their holiday magic show Wednesday, Dec. 5, at Bishop Ireton High School, located at 201 Cambridge Road, Alexandria, from 7-8:15 p.m. A donation of a new toy or canned food item is suggested for admission, but no one will be turned away. Donations will benefit the Alexandria branch of the Salvation Army.

THE FINAL MAGICIAN of the night is the only one who does magic as his full-time job, putting on somewhere in the neighborhood of 500 shows each year.

Louis Meyer, an Alexandria resident, uses puppets in his act.

"The puppets perform tricks too," he said, adding that children start the show knowing the puppets — an English sheepdog named Woofer and Chico, a mind-reading monkey — are puppets, "but by the end they come up and ask to pet my animals. They think they're real."

The set involves a lot of interaction with the audience, but also with the puppets, Meyer said. That helps keep the children’s attention focused on what's going on in front of them, a trick Meyer learned working as a photographer for children and family photos years ago.

But at Christmastime, children are already ready for unexpected things to happen, he said.

"They're super excited. They see everything as magic. Unbelievable things happen at Christmastime," he said.