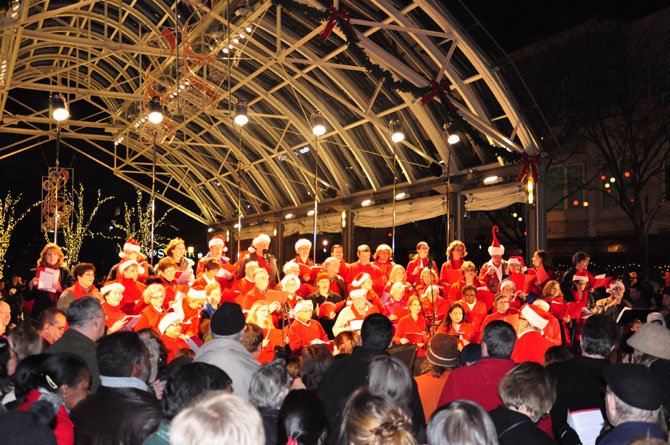 Reston — Having just moved to Reston in July, Bill and Marie Jones and their two children weren’t aware of the annual festivities that happen at Reston Town Center every year on the Friday after Thanksgiving, just after dark. 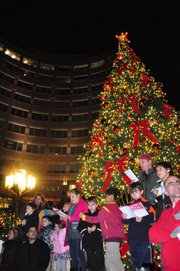 Families gather around the Christmas tree at Reston Town Center Friday, Nov. 23, just after it is lit for the holiday season.

They thought they were headed to town center for an evening of ice skating and frozen yogurt.

"We were just wrapping up a skating session when we noticed the large crowd gathered around the tree and the risers next to the rink set up," Marie Jones said. "We decided to stick around and see what was up, and it was a great decision, truly a magical moment."

The magical moment for the Jones, and hundreds of families that knew exactly what they were in for was the arrival of Santa and Mrs. Claus to light the large Christmas tree in front of the fountain.

After the sun went down, the crowd was abuzz waiting for the duo to arrive. Many children were perched on a parent’s shoulder trying to be the first one to spot the couple on their carriage.

"It was nonstop excitement for about half an hour for my son while he was on my shoulders," said Dan Harris of Reston, who at six feet, four inches gave his son Connor one of the best views in the house. "Almost every flash of light of movement at the end of the street got his attention, but by the time they actually came down the street, I think he was wary of false alarms."

When the red and white clad couple showed up, they asked everyone in attendance to close their eyes and wish for the tree to light up, a wish that was granted.

After the tree was lit, members of the Reston Chorale led the crowd in a holiday sing along, featuring classics such as "O Christmas Tree," "White Christmas," "Joy to the World," "Jingle Bells" and more.

"For the past few years, we’ve made it a priority along with our neighbors to make sure we make it down here for the parade, tree lighting and sing along," said Erin Cheever of Reston. "It’s a fun day to spend at the Town Center, the adults can get some shopping in, the kids can wander around and ice skate, and the whole day really helps us all get into the holiday spirit. So much so that we’re pretty much committing ourselves to put up the tree Saturday, because the kids are so fired up."