It was unintentional that the marker unveil date planned for Flint Hill Cemetery aligned itself with proximity to All Hallow’s Eve. The alignment did, however, give rise to a more theatrical marker dedication than what is more typical of the ceremony. The Oct. 27 program at Flint Hill Cemetery honors the memory of the 165 veterans—from Civil War to 20th century wars—buried at the historic Oakton site. The marker dedication begins at 6 p.m., as darkness settles over the gravestones.

“For those interested in local history, this should prove to be a special event and a bit unlike any other program you've seen before,” said marker committee chair Jim Lewis. “Definitely an 'out-of-the box' historical marker unveiling with some interesting twists.”

The twists, you might suspect, involve illuminations, spirits and voice-overs. While the program echoes of another dimension, it maintains the dignity and respect the interred deserve. It is a novel approach to a marker dedication, designed to bring history to life and to bring awareness to the site’s importance in Oakton history.

“It’s unique that any church would intentionally build on top of a fort site,” said Lewis. “Church of the Brethren is a ‘peace’ church and, I think, they built it there, basically to take the bad and make it good.”

A Civil War Trails marker noting the importance of the historic Flint Hill Cemetery in Oakton is to be unveiled on Saturday, Oct. 27, at a 6 p.m. ceremony. The program features illuminations and a roll-call reenactment of Civil War soldiers interred at Flint Hill Cemetery.

THE 26 CIVIL WAR DEAD include both Union and Confederate troops, four of whom have been identified as Mosby’s Rangers. Recognizing the cemetery’s role in Fairfax County history, Visit Fairfax paid for the marker and Hunter Mill corridor supporter Lewis authored the text.

Flint Hill Cemetery abuts the Oakton Church of the Brethren on Rt. 123. Most people, Lewis said, do not realize that there are two cemeteries sharing a border on the grounds. The second belongs to the Church.

“What’s also really cool about this is all the stories associated with the cemetery,” said Lewis. “Besides veterans, there are the graves of lots of prominent Vienna and Oakton families.”

When Lewis conducts Civil War tours sponsored by the Hunter Mill Defense League, he stops at Flint Hill Cemetery, and of the stops he has made over 32 tours, this cemetery is the visitors’ favorite.

The date was determined by the availability of the 17th Virginia Infantry, Co. D. In full military dress, they are to present and retire the colors and will be the illuminated shadows of the past. “There’s no relationship to Halloween,” said Lewis. “We did move the time from morning to evening for more atmosphere.”

Illuminations, from secreted lights to luminaria, will highlight the graves of the Civil War troops buried at Flint Hill.

Many well-known names are engraved on the tombstones… Abram Lydecker, who, in 1859, built what is now Freeman House… Leon Freeman, who inherited the house and founded the Vienna Volunteer Fire Department; Josiah Bowman, whose family home stands today on Center Street; Mary Holland Bell Snyder, who taught blacks in Oakton in 1851; and Thomas Hartwell Walker, a Mosby Ranger who was one of the first trustees of the cemetery, and, coincidentally, an ancestor of David Farmer, current FHCA president.

“I think that what makes this cemetery special is that it is a place where people can come and reflect on local history and the contributions made by former area citizens that are laid to rest there,” said Farmer. 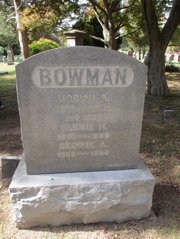 Prominent names are engraved on tombstones from the 19th century, including that of Josiah Bowman of Vienna.

Oakton Church of the Brethren was built over a Confederate war fort. Today, only the earthen fort walls remain intact, embracing 150 years of history. The fort’s wall, too, will be illuminated.

“From an historical perspective, it’s unique to have a community cemetery operating continuously for 160 years,” Farmer said.

Hot cider and cookies will be served after the marker dedication and live period music is to be performed.

“Listen closely as voices from the dead come to life,” Lewis said.

To learn more about the historic Flint Hill Cemetery, go to www.flinthillcemetery.org/. For information on the work of the Hunter Mill Defense League, see http://www.hmdl.org/.